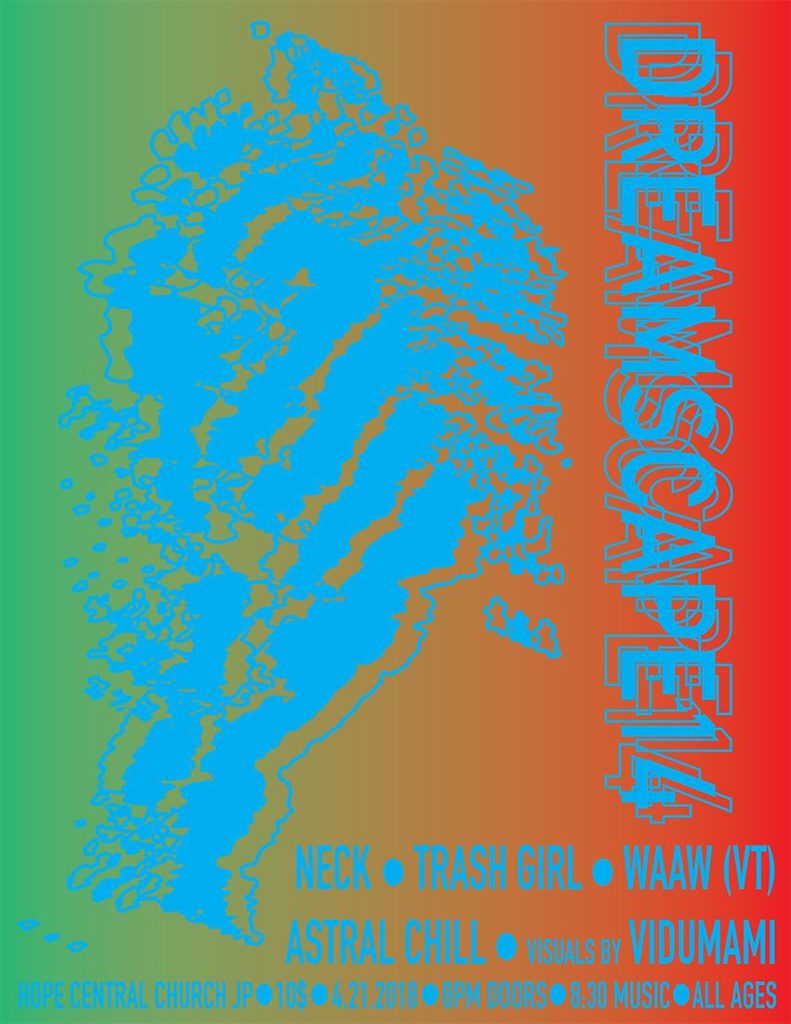 It’s not often that I go to church, but boy was I TAKEN THERE on Saturday night. Dreamscape 14, a visual and sonic experience, was housed in JP’s cozy Hope Central Church, and there could not have been a better setting for a show designed to cultivate a sense of maximum chill. The musicians set their stage in the transept, backlit by a single lamp and Vidumami’s appropriately dreamlike visuals (water reflected at the bottom of a pool, a lot of introverted colors, posterized flames, rainbow Chinese lanterns floating, etc.) projected into the apse. The sacredness and intimacy of the space combined with the reverie-inducing soundscape transported me into a higher realm. 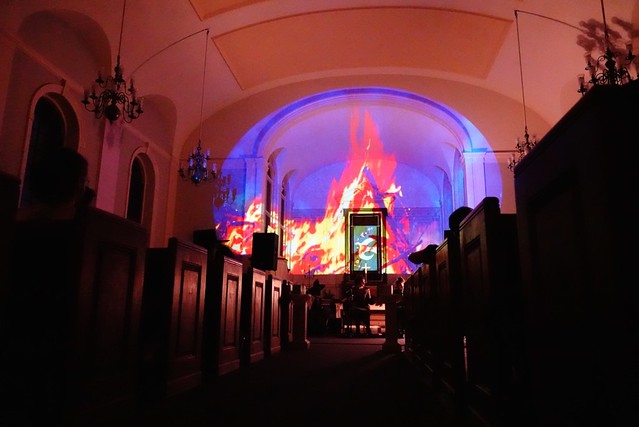 Trash Girl took the stage first, serenading the crowd with what I described in my notes as an “electric folky lullaby lovesong.” Though she picked and strummed an electric guitar, she did so gently: there was no heavy-handedness nor any distortion, only clean and crisp high notes. It was calming in a very particular way, conveyed a sense of hopefulness you feel after a loss, or when you’ve reached the end of something. One lyric stands in my memory: “Autumn in New England has always been a time of introspection,” which I found especially meta, as I was in the midst of some heavy introspection conducted by her music.

She was followed by lady duo Neck, whose music I would describe as eerie and ghoulish in the best possible way. Their music was ambient, so ambient that even their voices seemed more like instruments than mechanisms to convey a set of lyrics. They used a looping machine for some truly loopy sounds; I distinctly remember a fire crackling, static growing and fading. Throughout their set especially, I had the feeling that I was in an independent movie and the scene had just cut in media res to me sitting in that pew. It was a truly out-of-body experience.

Waaw, a duo hailing from Vermont, took the stage after short break. I felt like I was having fun just watching how much fun they were having. Their set was bluesy, jazzy, funky; there was a bongo kit involved, which I think rounds out the image. They captured the essence of the chill space, touching something in my soul that reminded me of just how beautiful it was to be a single human in an ever-expanding universe. I felt at peace.

The show closed with Astral Chill, a Vermont band whose name seems almost too apropos of its music. The “arboreal light and sound phenomenon” created what I imagine an alien transmission would sound like. Had it not been for the increasing stiffness of my back from sitting upright in a wooden pew for two hours (the only complaint I have with the venue), I would’ve thought I was floating through space, could’ve grasped a neon green star.

The night was created to make a space for quiet, which is something desperately needed in the world today. The sacredness and intimacy of the space made it a wholly holy experience–I felt a deep tranquility, as if my soul were dozing peacefully in a park, zephyrs coming off a nearby lake providing relief from a hot sun. I wondered if this was how religious people felt praying. I thought, we in the pews are laymen, receiving the message of a peaceful god from the chillest clergy around.

Jesus Christ this was some epic shit. First mind blowing live music experience since that thing that happened. Metal heads overflowing onto…