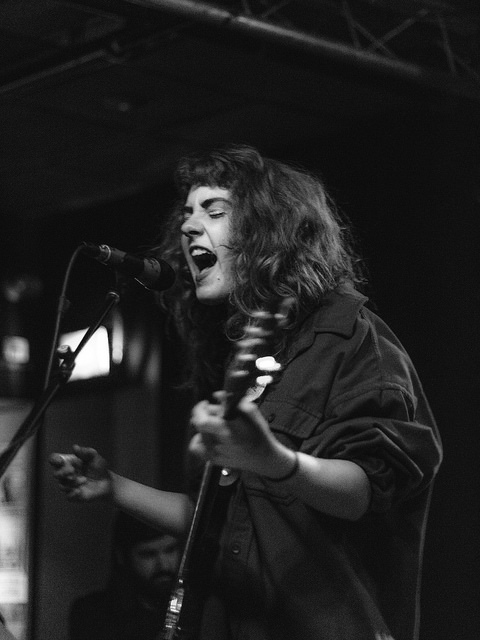 Great Scott kicked off February hosting some of the most talented and respected Greater Boston-based bands. The cold, rainy Thursday night drew in a more intimate crowd in terms of headcount, but because of the un-ideal weather conditions, all attendees were especially dedicated to supporting their favorite local musicians.

Deep Secret, Boston’s own four-piece indie rock outfit, did not disappoint. The four dudes opened the show with dreamy capoed guitar riffs, sing-y bass lines, head-nod-inducing drum hooks, electric vocals, pleasant lyrics—“Someday it’ll be okay”—and a healthy dosage of throwback “your mom” jokes in between songs to keep the crowd’s spirits high. Speaking of high spirits, the band closed the set with “Heaven,” the first-ever song the band produced, which happened to be one of their most memorable. Deep Secret seemed to be working with a distinct style palette right from the get-go, which is refreshing.

Next up was teenender. The Boston four-piece welcomed the lead vocalist’s guitar-and-keys-playing brother all the way from LA. There is no denying that they amped the performance energy up to the next campy notch. Warming up with Fleetwood Mac’s “Dreams” and then cutting to their own track “Not a Dream” was a clever and unexpected hook that I know at least made me smile. The band’s actual set list, derived from their latest album kissed, featured syncopated guitar melodies responding to foot-tapping drumbeats, bass phrases at the base, and some delicious synth threads. With the poppy, vibrant, seemingly West Coast-inspired concoction teenender dished, it was nearly impossible for the audience not to dance along.

Boston-based Lady Pills followed. The three indie rockers, all graduates hailing from Berklee, played their first gig with a guest fourth member Jojo that night—it was “Jojo’s first show show” according to the band’s own Ella Boisonnault. As inventive as they are haunting, Lady Pills made sure that the third act of the night did not detract. Timpani mallets replaced traditional drumsticks on the kit. Marching band snare beats mingled with drifting vocals and plucky bass. And the inclusion of an unforgettable synth banger ensured that the audience’s dance moves did not fizzle out from the previous set. The variety in sound and atmosphere in Lady Pills’ track list kept the crowd wondering what would happen next. All four ‘lady pills’ nailed it, continually prodding and piquing the interest of the audience. Stellar stuff.

Boston’s successful dream pop project Funeral Advantage headlined. Sole member Tyler Kershaw performed as lead vocalist backed by four mercenary bandmates filling guitars, bass, and drums positions. On stage, the five-piece combined a few of Kershaw’s older crowd-pleasing hits from the fantastic Body is Dead—“Not in My House” and “Sisters” (!!)—with a handful of newer tracks from his most recent, lyrically darker, yet still sonically upbeat, album Please Help Me. On stage, catchy-as-heck, enticing guitar melodies blended with Kershaw’s soft, emotive vocals that fans have come to know and love. Kershaw’s fist jabs mimicked weighty cymbal crash drops in exact synchronization. Bass grooves translated into Kershaw’s hip swings and microphone stand twirls. The band has chemistry, surprisingly, considering the group’s lack of collaboration during album production. Still, Kershaw & company owned the stage in a way that only an experienced and undeniably skilled band could. Funeral Advantage killed it. Their four-track, short but effective set was a satisfying ending to an overall satisfying show.