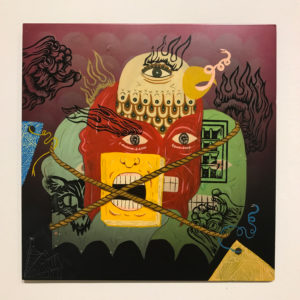 Artmaking is an undeniably social practice, and it’s no secret that collaboration is one of its most valuable vehicles regardless of discipline. Dear So-And-So, the current exhibition at Distillery Gallery, spotlights the intimacy of creative partnerships and celebrates the exploratory virtues of the collaborative process. Every body of work in this exhibition is the result of a year-long “pen pal” relationship between two artists– what co-curator Mary Lewey calls a “long-distance creative relationship.” Curators Lewey and Helen Popinchalk began by selecting a group of artists who then were invited to choose their individual collaborators. Typically, their series of work emerged via multiple “hand-offs” between the two artists, whether it be the literal exchange of artwork or of their ideas. The works on display in Dear So-And-So are relics of this back-and-forth; trial and error; relinquishing of control, and the many marvels of these creative partnerships. 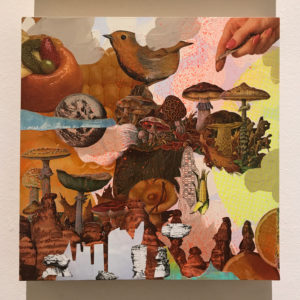 Motivated by their shared interests as artists and friends, curators Mary Lewey & Helen Popinchalk originally conceived of the show’s concept as a project to pursue in their own art practices– the duo’s collaborative collage and screen-printing series is also featured in the exhibition. However, upon beginning this personal project, Lewey and Popinchalk realized that they wanted others to “come along for the ride,” and deciding to adapt their idea for an exhibition context, distributed this opportunity to other artists they know and/or admire.

Interestingly, many of the curator’s artist selections and artist’s partner selections began as “Instagram crushes.” Mary and Helen sought to bridge such a gap between these online and real-world admiration circles, creating a space for their work to coexist, be encountered anew, and to also encourage new work to be made between these artists.

One outstanding aspect of Dear So-And-So is the wide variety of media and styles it showcases. A maximalist sensibility pervades the exhibition, owing to the volume of work displayed from each series as well as the artists’ shared enthusiasm for color. Although the curators checked in on the pen pals’ progress every few months, half of the fun for them was the surprise of receiving the final artworks for display. “Most of them are completely unrecognizable from when we first saw them,” says Lewey. 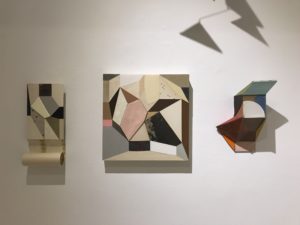 Visitors will find a pleasant mix of sobering and playful tones in Dear So-And-So, a dynamic which also reflects the show’s success in dismantling the traditional, hierarchical attitude towards the distinction between graphic art and so-called “fine art.” Certain artworks, such as Conny Goelz Schmitt & Tim Hansen’s series of geometric mobiles and wall-bound sculptures, concentrate on the materiality of their collaboration with respect to their individual media specialties. Hansen typically works with enamel on copper, whereas Schmitt works primarily with vintage book parts and recycled wallpaper. The textural dialogue between the gloss of enamel and the matte of the book covers, as well as the angular shadows that each work casts (particularly the mobiles), is very aesthetically pleasing, although, in my opinion, does not invite as much of an emotional connection as other series in the exhibition. 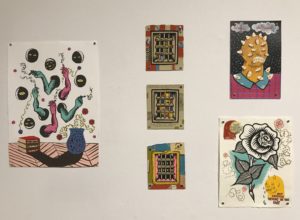 Alternatively, Joe Banda & Jake Cassevoy’s series of graphically-styled gouache paintings and block prints on paper convey feeling with palpable electricity. Often their work features hand-painted text which, whether amusing or morbid in tone, brings a moment of conciseness to the complex feelings which their spiraling imagery sets out to express: “I think I can” … “beat this” reads the text in “New Underwear, Old Friends” (see top-most image), splitting up the sentence onto each undereye-bag of the red, apprehensive face within the work. Together, Banda & Cassevoy exhibit a stylistically-coherent and whimsical approach to form and communication without compromising the emotional charge of their imagery.

“Often when you’re making something , you’re making a set of rules for yourself to follow. But your collaborative partner helps you break that,” comments co-curator Lewey, appropriately acknowledging the liberation from personal practice that one can experience from participating in creative partnerships. “It’s really helpful to have another set of eyes on the work to assess what’s working and what’s not.”

I was particularly enthralled by John Skibo & Chloe Isadora Reison’s mysterious series of paintings and sculptures. Although the pen pals had been friends for a number of years prior to this exhibition, this series marks their first time collaborating. Reison is primarily a sculptor and installation artist and Skibo is a painter who takes figurative sculpture as a frequent subject. Their series is a marvelous example of a pair whose collaboration profoundly reconciled their separate art practices. “We structured the collaboration as a dialogue, where both of our voices could be heard and influence the direction that the work was taking,” comments Skibo and Reison, an approach which manifested in their series through a reactive mode of artmaking. Maintaining the exchange of ideas throughout the course of the project, the two artists periodically sent each other any work they had made and any images that interested them, and then used these objects and their ensuing discussions to inspire new work. Soon the artists discovered their common interest in “notions of masking, shrouding, and covering-up,” but approached these ideas through subtle differences. 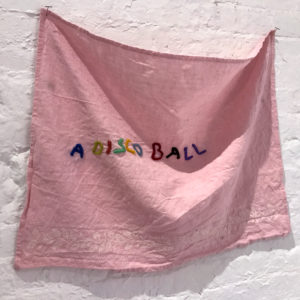 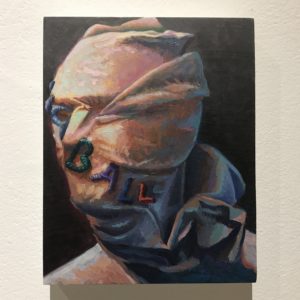 The evolution of Skibo and Reison’s series began with Reison’s “Disco Ball” (the embroidered dish towel), which next made an absolutely brilliant appearance in Skibo’s “Disco Ball Shroud” painting, and so on. Such a series effectively marries the two niche conceptual practices of the pair: Skibo’s interest in obscuring traits of recognizable familiarity in his figures (“portraits of anyone,” as he calls them) with Reison’s interest in liminal spaces (“non-places,” as she calls them). Powerfully distorting space and time, each work feels as though it had to hop multiple dimensions in order to reach the others. Especially in “enfold” and throughout the 2D work of the series, there is noticeable tension between the representation of 3D forms within the 2D realm. Perhaps this is because the series’ 3D artwork often appears within the 2D works. Nevertheless, such an effect conveys an irresistible sense of suppression and of information being withheld. To me, the series’ imagery reads as that of dreams or distorted memories, and overall I immensely enjoy the mystery that this collaboration has conjured. 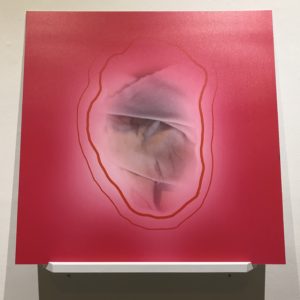 With the exception of two series in the exhibition, my only critique of Dear So-And-So would be its lack of integration of digital media. This additional media perspective advances the kinds of conversations possible from this exhibition by considering the role of computers within art and technology collaborations. Sarah Trahan & Andrew Slwinski’s “Shadow Self” series, therefore, is of utmost relevance: it explores “how technology can be used to augment, mediate or even suppress human agency in the creative process,” as Slwinski states. This series marks the duo’s second collaborative project, for which Slwinski created a third collaborative participant: the GAN (Generative Adversarial Network) machine learning system. Together, the artists and computer created the series’ imagery via a “call and response” between two sets of images: 1) Trahan’s collage work (the human input), and 2) the GAN’s training set, comprised of images from Trahan’s social media posts (including her re-posts and “likes”). Illustrating this process are two videos also on view: one that shuffles through the GAN’s training set images, and one that shows the GAN’s “thought process” as it generates images using both image sets. Here, we see the GAN visually interpreting the artwork and “likes” of a human (Trahan) and creating a warped, composite image from this information to reflect Trahan’s aesthetic taste– perhaps even her personality… 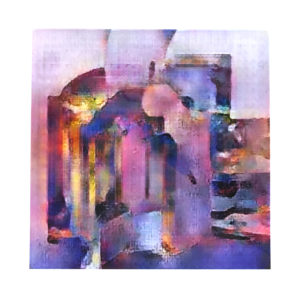 To create the final work, Trahan made 3D paper “pop-ups” using prints of the computer-generated images (which are also displayed within the series). There is a surprising amount of depth apparent in the computer-generated imagery already, but Trahan’s hand-cut pop-ups achieve even more dimension and dynamic– an effect that only the human touch could achieve. “Unlike many generative systems that rely on some aspect of probability or chance, the system we built for this project is largely deterministic but often difficult to interpret,” says Slwinski. “It has a way of surprising you in confounding ways as the GAN is able to mimic aspects of human creation in ways that are often unexpected.” Such experiments in art and technology contribute to the debate on whether A.I. is foremost a human tool or an increasingly automated brain. For instance, it is interesting that the GAN was solely responsible for determining the entire color palette and (pixely) texture of the series. But Trahan notes that the GAN “actually ended up pushing me into making some cool-looking things that I would have never have made had I not been prompted by this machine.”

Whether a machine or fellow human collaborator, creative partnerships are an invaluable resource and a welcome challenge for creatives of all kinds. The bodies of work in this exhibition demonstrate that the value of artistic exchange lies in its power to conjure new ideas that might not have been encountered otherwise. On view at Distillery Gallery until December 29, 2019, Dear So-And-So is an innovative exhibition and a testament to what’s possible in the artistic community, whether online or IRL. But I believe the true testament of the project lies in its capacity to outlive this exhibition: many of the pen pals have expressed their intent to continue collaborating and pursue longstanding creative partnerships.