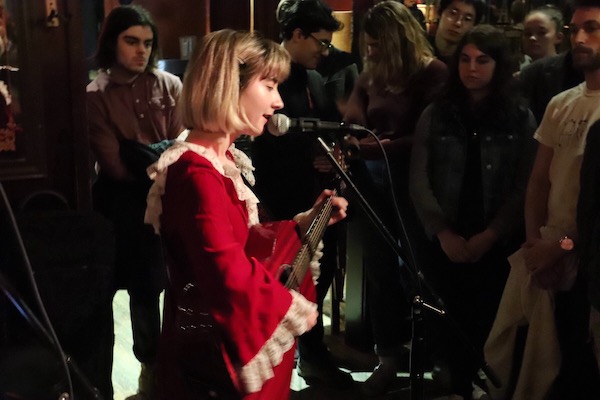 Carol @ The Plough and Stars, Cambridge

The Plough and Stars is as cozy as it is familiar with the local college music scene. But every once in a while, an act will stop by the Cambridge watering hole to prove they’re meant for more than the bar’s cramped back corner. A stacked Valentine’s day lineup last week gave attendants a few fresh faces that have that special something.

The first song of the night came from Houndsteeth, a duo from New England Conservatory that performed an eclectic mix of music, throwing in a jazz standard halfway through their set for the sake of Valentine’s day. Quirky in their performance, the duo gave the bar a wonderful start to the evening, each working off of the other’s energy to make for a fun set.

Most notable of the four acts was Carol, a Berklee College-based solo project that left the crowd clawing around to find their hearts on the ground. She premiered a series of new songs that night, including a hauntingly beautiful performance of “If Ever,” in which her poetic lyrics are on full display. “If all of the things we said take shape, they’ll be circling round our heads,” she sang with a deadpan face, staring blankly in front of her.

Following Carol was Brennan, another solo act from Berklee, who released her new single “Shooting Blind” the next day under Northeastern University’s student-run Green Line Records. Her set provided a divergence from what we had seen in Houndsteeth and Carol, giving bar-goers a hard-hitting acoustic set that was reminiscent of Courtney Barnett’s early work.

Capping the night off was Havins, another Green Line artist who knew how to play to the crowd. Valentines day was nearing its end, and plenty of people were closing their tabs. His music is the lightest of the four, bordering on folk. Rather than allowing himself to become the background music to the end of the night, he made his set interactive, getting the crowd to clap along and sing his lyrics back to him.

I wasn’t sure how I would spend my Valentine’s day evening, but I was glad to have spent it watching these four amazing acts in Cambridge.

Dorchester is a unique community within the greater Boston area. It’s an outlier in a city that is known for being somewhat…

To be concise, the reception consisted of two separate exhibitions hosted at the MIT List Visual Arts Center. The first was…