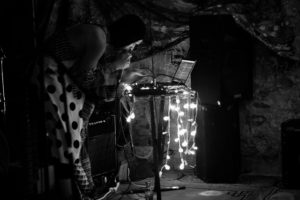 While a good chunk of Boston spent March 17th drinking green beer, throwing chairs and doing whatever else it is that people do on St. Patricks day a rad arts festival was going on to honor and celebrate Asian and Pacific Islander artists! Nestled away in an Allston basement, API or Die Fest celebrated art from API artists around the New England area. Organized by Olivia West, API or Die brought together a mix of talented bands and vendors, for full day of great performances at Make Out Point.

At around 3pm when the music started many of the fest’s softer solo acts played. Most of the room remained sitting and the atmosphere was very relaxed, with attendees listening quietly. One of the highlights from the first half of the day was The Michael Character’s entertaining and informative, part musical set, part history lecture. I think it was also impossible for anyone in the room to keep from being moved by Nature Shots’ breathtaking performance.

While I unfortunately had to head out shortly after the intermissions, Jonathan Vahid was around to capture the rest of the day’s action. Check out photos from both of us in the gallery below!

API or Die featured music from:

And the fest’s art vendors were: