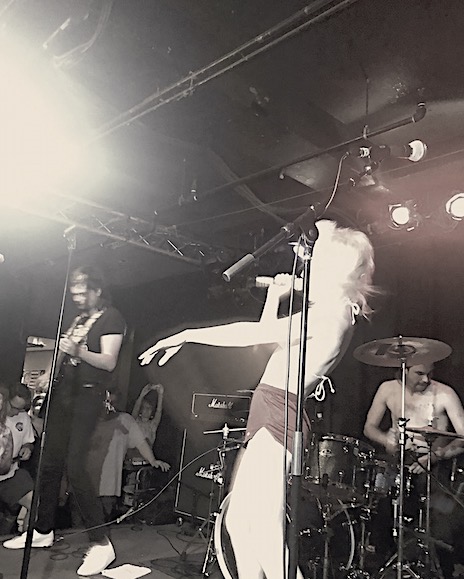 7/20/2019 – Amyl & The Sniffers came all the way from Australia to play to a sold out Great Scott crowd Saturday on a steaming hot night in July. Local Punks, Gymshorts, opened to Roadhouse on the Great Scott television and cheers and jeers from the crowd. I was feeling tired from working and biking all day long, but was still enjoying my time with my friends at the gig.

I was anticipating this show and saying that Amyl & The Sniffers did not deliver would be a total fucking lie, but as a natural born sceptic, I’m wary of this anticipation. Simply, what is anticipation for a rock show and from what desire does this urge spring from?

For this, let us turn to Amyl & The Sniffers debut, self-titled album to suss out, as the representative listener for y’all, where desire comes from in the form of wanting to see this rad pub rock band from the other side of the world.

First, I’m calling out the word ‘punk’ specifically because I’ve been saying recently that I’m ‘punk.’

I dyed my hair blonde, I gave myself a stick-and-poke tattoo, I’ve been cursing slightly more, and in classic style, have not been giving a flying shit at my day job (that part is easy). I also have the working class background, got the basic ethos and music taste, I even have the queer anarcho-communist vibe down pat. So yeah, punk, said and done, right?

Wrong! The desire to be punk is not, in itself, punk. As any poser can tell you, being anti-punk is punk rock – you follow? This ethos, a laughably punk ethos, has, regrettably opened the punk ethos up to all sorts of iterations and mentalities, that to me and you dear reader, are totally not punk rock, i.e. nazi-punks, any music genre with the word ‘pop’ in it, and anything closely resembled Trump-ism or sympathy for the Alt-Right.

So what then is punk? For these questions, thank your local music critic (that’s me!) for, for better or worse, being the discerner of what is punk and not. (*Disclaimer* this act is not wholly punk rock but someone’s gotta do it.)

For one, Amyl and The Sniffers are raw punks, and so we have the first discernment. All punks are people, but not all people are punks. Amyl & The Sniffers played to a crowd of, from my perspective, mostly Tom’s Dick’s Harry’s and Jane’s looking for a punk spectacle. There were hardly any leather clad freaks at Great Scott that night (it was nearing a hundred that night) yet studs too were in short supply. Everywhere I turned there was someone blowing off steam from their nine to five, demonstrating their encampment in a predictable, planned, consumerist society. A part of me ached to see just one freak besides those on stage and in the mirror but alas, I was trapped in a sea of weekend warriors masticating one spectacle of one emotion of the human spirit after the other, as if each night is the same from the night previous, only the artist and the crowds change.

Such is show business. In my view, for punk to have any value anymore in a modern society, it must be in a hard to reach place, away from the 9-5, planned weekly meals, punching in and clocking out etc.. A person needs to have a certain rawness to them for punk music to really floor someone with its intensity and message. Punk is successful, in part, because it provokes a tangible desire for and from the/an other simultaneously. 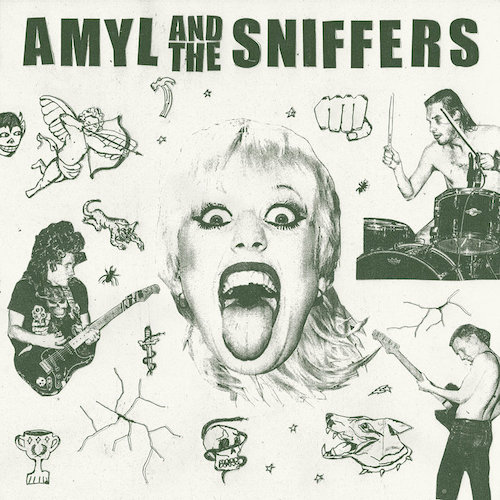 Upon leaving the show, my friend half-ironically asked ‘How many people there went to see a half-naked chick?’ When talking about music idolatry and attraction, the connection is obvious, but no where near 100% of the appeal. Though I bring my friend’s question into consideration specifically in this case because, not only was it hot, and Amyl (and the other band members) were half-naked and quite … hot, their aesthetic plays off simple rules of attraction and expands and disburses these rules back into the nihilistic culture from which they came.

With ever disbursing ideals, goals, and dreams, the sheep isn’t the only person in need of latching onto something simple. In artistic terms, simplicity and energy are key to standing out in a sea of everyone trying to make it and actually saying something. Whether or not that is heard, or how long-lasting Amyl & The Sniffers’ impact is remains to be seen.

But with dynamic lyrics like ‘I like proving people wrong/ That’s why I’ll probably die alone’ it is more difficult not to turn these dynamics into something seen by more and more people, if only to increase intimation on the artists behalf, or for those they seek to entertain, punk or not, all regardless of any desire.

Photo’s by the Author.

Chris Hues is a human & writer from Boston, Ma & music editor of bostonhassle.com. //// They can be reached at chrishughes@brain-arts.org or @crsjh_ via instagram & twitter.