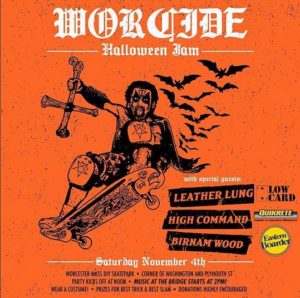 “Bridge dust will take 10 years off your life.”

I’ve just spent the past 3 hours shoveling dirt, billowing clouds of said hepatitis dust into the air. Time means nothing to me, but sweat means a lot. Especially when it forms into an itching, viral, paste on my lips.

“Worcide really does hate me.”

I’ve watched the Builders for a few weeks. They are working on finishing the china bank. I am sifting through Spice bags, beer cans, syringes and antient rocks for the choicest soil which will serve as the foundation for the concrete. The trucks arrive with a few hundred pounds of the stuff tomorrow.

My task was to uncover an old sewer. I did that an hour ago, now I’m confused. A guy keeps coming over and telling me I’m doing it wrong. I find out later his name is Braindead Ed. He drinks a beer and keeps saying, “Do you hate me yet?”

Scattered around the concrete structures and amateur graffiti there are brooms, shovels, hammers, stakes, and metal beams. Flattened cardboard boxes are beds for unfortunate souls. They hide in the shadows by mounds of tires and have private conversations with Death. This place belonged to them. Worcide is haunted by the living dead.

“I used to skate,” said a squatting, dusted, man a few weeks ago in front of the large mellow quarter pipe, “but then I went to Iraq and got fucked up.” Now he is here. The woman with him just stares silently into space sealing her fate which she guarded in her purse.

I have no idea how this phrase came to me, but I believe it is true.

Washington street once passed beneath the CSX Worcester-Providence line, but for some reason one side of the Bridge was sealed; a dead end enclave that the city seemed to forget. This place is now an accumulator of bad orgone.

Long before the Builders arrived it was a portal to hell. All around you see the trappings of failure; the fate of those that fail to RIP. The truth can be found in this putrid place. Wizards carve their magic circles into the concrete and their sigils have the power to harness, or close, this portal.

The Builders must know this.

It was Saturday and I managed to leave work and get on the road to Worcester without incident. I needed to get to Worcide before the music stopped. I got there around 3. The music began at 2. I saw a Builder, Jamie, in the Green St. lot. “Birnam Wood is about to play. It’s crazy.”

I looked down the finished china bank and got incredibly paranoid. ‘There are way too many people here.’ Usually, I will go to skate and no one is there. That is why the homeless people that stroll in are so conspicuous and their behavior seems so possessed. It was hard to snake my way over toward the musicians.

People were ripping already. It’s exciting to see. They’ve congregated. Little kids were there running for their lives to avoid skaters that were avoiding lightning bolt children between boneless ones. ‘Pure chaos; raw power.’ I was scared. I hallucinated: police arriving and killing me. Just me, for some reason.

They were loud. Too loud. Way too loud. I took off my coat and put it under my tape machine. The Bridge was shaking. Undoubtedly, that brilliant hepatitis dust was stirred. It would be a miracle if the recording turned out well.

The music continued and the skaters were killing themselves on the 100 year old cobblestone flatground that is Washington St. Kids ran, almost falling, along the transitions. One guy smashed full speed, head first, into the steep wall. He just laid there motionless on the concrete as kids jumped over him. He got up and did a footplant off the wall 4 feet over the coping.

And then it was all over. The police arrived. Time to turn off the generators. No tear gas. No chants of “Fuck the pigs, man.” Everyone got it. A Builder told me they were going to move to another place so the final band could play. I needed to get to Clinton to record other performances so I split. The Halloween Jam was a success.