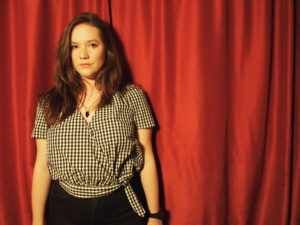 Nov. 10th at Studio at 550 in Cambridge for Boston Hassle Fest 10 you’ll witness creation and collaboration truly of the moment. Seven acts run the gamut performing free jazz improv, experimental, noise, and soundscape explorations to bring you up a stratosphere.

The avant-garde W-2 up from Brooklyn bring their combative electroacoustic mashing of tenor sax and synthesizer. Lauren Tosswill drops what I can only describe as electro-loop-field recordings. Member of Para Tet, Forbes Graham, and Boston resident is also on the bill along with Michael Rosenstein and Jesse Kangas-Collins, Bass Case Scenario, and newcomers The Electrician.

I caught up via electro-chat with the alluring improvisational guitarist, vocalist, poet, and known John Zorn collaborator Wendy Eisenberg about her upcoming Nov. 10th performance. We spoke about all things Hassle Fest, guitar lines vs. power chords, music school, improv secrets, and probiotics.

Boston Hassle: What’s your feeling about your upcoming Boston Hassle Fest performance?  Do you have expectations, excitements, fears for a home town show?

Wendy: I am excited to be playing Hassle Fest X! It has a free-jazz and improvisation division within what might be a “rock” show, which is pretty rare. Sometimes when I play home-town shows (which is funny, because I am from Gaithersburg, MD, and only lived in Boston for three years), I feel a kind of musical dysphoria because I think people expect me to be in Birthing Hips, which I am grateful for having been a part of but is a very unrepeatable moment for me. So I sometimes feel washed up. I’m telling you this so future me can read this and remember the importance of phases, and how much that band meant to me.

Anyway yes, I feel like playing the free-jazz part of Hassle Fest is amazing and lucky and also symbolic. I’m so happy to be at this place in my career where I get to collaborate with an extremely new band of people I’ve listened to for a while (The Flying Luttenbachers is hugely important to me) in the realm of “improvised music” and not, like, indie rock, which is a music I have a lot of feelings about. Another excitement is that my friend Steve Cameron, the drummer of Tortured Skull, who plays bass in my new rock band Editrix, is also playing but in a different show. It’s cool that I’ve got friends all over the fest. Seems like that brings home that this is a “community event.”

BH: Your new record is all you exploring that guitar in beautiful, dissonant, and challenging ways.  What can we expect with Damon on bass and Weasel on percussion?  Will you perform any material from “Its Shape Is Your Touch” or are you taking the opportunity with the group to go on a journey elsewhere?

Wendy: We will definitely go elsewhere. I have a Jekyll/Hyde relationship with the acoustic v electric guitar thing and this is def more on the Hyde Syde. I think it will still be beautiful, dissonant, and challenging music but way less introspective, or at least less obviously introspective. 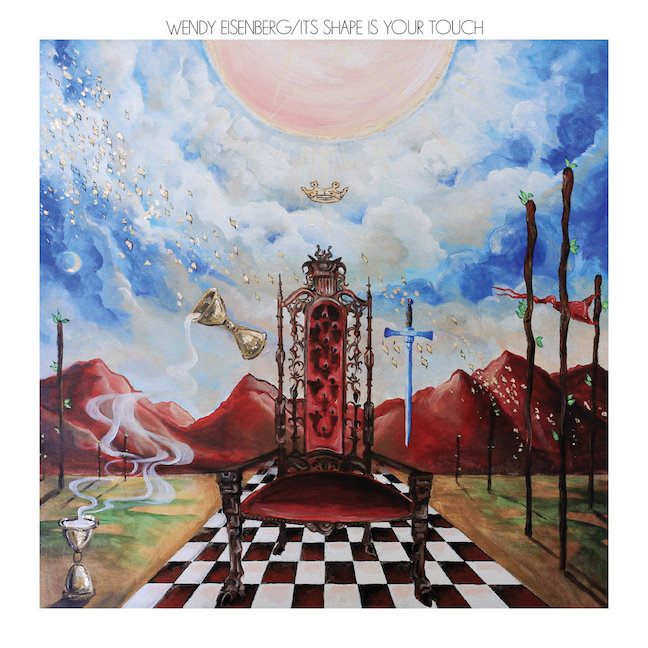 BH: How do you prepare with the band for such an open musical situation?

Wendy: 16 hours of yoga a day and mucho probiotics. Also listening to the audio-book of Zen Mind Beginners Mind at double speed.

BH: Is there a creative energy you feel has more value in an improvisational setting?  Or do you see equal value in laying the pocket and riffing out some power chords?

Wendy: I have maybe played 4 power chords in all of my various rock band settings in my whole life. All lines all day! But yes, I truly believe in an ontological kind of value system in music. For me, the same creative energy informs my soft songs, my solo/compositional thing with the VDSQ record, my pocket kind of “rock” playing, and my “pet shop on fire” or “computer shop on the fritz” kind of free playing that I can do in trios. It’s about context, sound, and intentionality for me; and in all of my compositions I have a “first idea is the best idea” concept so it all just feels like freezing or melting that first creative impulse, with rock being on the stalagmitier end of things.

BH: What are you looking forward to about Hassle Fest aside from your performance? 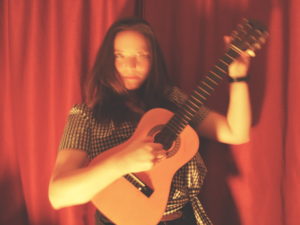 BH: You have true personality on your instrument and your music.  How has The New England Conservatory fostered that personality?  Do you ever have to fight dogmatic thinking to express what you desire or is it a righteous support system for your ideas? Not trying to throw you under the bus here but I’ve always been interested in musicians’ relationship to higher education.

Wendy: I think Birthing Hips was truly different. I can’t honestly say that about most music school rock bands. It’s a genre that I categorically hate because I recognize myself in it, and also because music school “rock musicians” tend to treat rock as something kind of exotic that they think they can be naturally better at. They can be kind of colonizers. It can be either over-informed and pompous and alienating and the wrong kind of ironic, or played down as “dumb” or “lazy music” that is “beneath them.” I am not afraid to say that I have definitely felt like sort of a poser in this mode, and I think it is important to note that everybody begins their interest in certain musics as a tourist, especially if they’ve felt separate from the culture where it came from. I don’t feel like a tourist anymore, except in the ways that I do constantly in the world as a specific type of freak. That being said, I think that it is important to be critical of music school rock bands who feel touristy in a bad faith way. You’ll know it when you hear it.

I am so lucky to have been able to get my masters from NEC because it’s not a dogmatic place, or at least it doesn’t have to be, and it afforded me more time and space to look critically at the aesthetic and sociohistorical dimensions of music with other motivated, thoughtful and talented people. I don’t feel like I have to fight dogmatic thinking to express what I desire except from the cultural arbiters of those genres to which I’ve never felt particularly welcome. I’ll leave people who hear my music to figure out what those genres may be. My ideas were supported when I was there, except for one tune I wrote in 2014, which Anthony Coleman (correctly!) said sounded pretty “new age” which hurt me because it was totally right, and ever since that critique all of my songs have been very fast in some way. Thanks, AC! Now I truly *must* shred.

I’m very off topic in this interview. Sorry. I am really happy that I went to music school, because I love music and I got set on a path where everyone I met in school was focused on a different aspect of “music” and put that first in their life, which is startlingly rare outside of a music school zone. I like looking closely at music and listening to music with depth and intention and studying music and getting better at music, and music school is, traditionally, a great place to do that. I’m privileged to have spent the time there, and recognize that privilege, and also recognize the talent and drive of my many other friends who not only didn’t go to music school but (sometimes vehemently) didn’t want to. For me, the more knowledge and exposure the better. I’m also really comfortable in academia.

BH: The free improv style is somewhat niche in its appeal, not saying mass appeal and acceptance is what you want or what matters.  Speaking from personal experience some of my favorite artists took many listens and attempts before I understood where they were coming from i.e. Zappa, Beefheart, Sun Ra, Zorn, Waits, my now favorite band, Clutch.  So would there be some albums or artists you’d recommend to those listeners who want to take a chance on the unexpected but don’t know where to start?

Wendy: Wow so vague! Beefheart is my guy. I like Ice Cream for Crow. It has my favorite solo guitar piece ever on it, Evening Bell. If you come from “rock” and want to feel a rock vibe from a “Free Player” starting with something like Ask the Ages or Black Woman by Sonny Sharrock is a good move.  Digging into some late Coltrane stuff like Olatunji, and into those Tony Williams Lifetime records Ego and Emergency where Tony sings like Kim Gordon, could be a really nice gateway. I like those records a lot, especially because they tend give some of my students, the ones who like rock music but hear me practicing before their lessons and enjoy that sound too, a context and preparation for other free sounds sensibilities.

Derek Bailey, Evan Parker, + Han Bennink on The Topography of the Lungs was a major turning point for me. So were Ornette Coleman’s Science Fiction and Albert Ayler’s Spiritual Unity. Braxton’s solo work, as well as his quartet with Marilyn Crispell, Gerry Hemingway and Mark Dresser. Cecil Taylor any and all. I think Sam Rivers is a really underrated compositional innovator who is super easy to listen to, and could say the same for Grachan Moncur III and Andrew Hill. Some of these are “jazzier,” and some aren’t but all of them were really important to me when I was starting to fall off the deep end. These days, I’ve been listening to the Cryptopsy record Whisper Supremacy a lot, with those funny Boston hardcore style vocals on them and the truly strange Scritti Politti record “White Bread Black Beer,” from 2006, which is, I think, more intense than Encoffination or Portal or something, because he’s just so totally off-putting. Neither of the two records are “the opposite of free-jazz” but I think all of these are united by the specificity of their appeal. 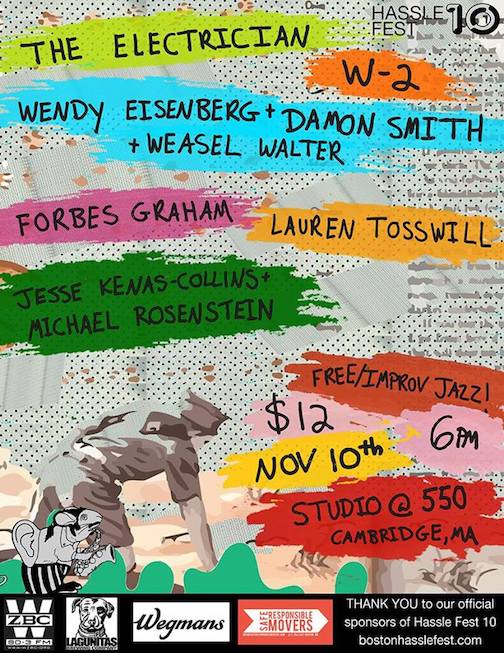