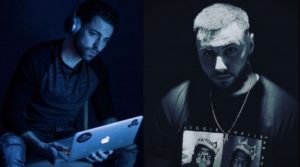 At first listen, Massachusetts hip-hop artists Washy and Cameron Iandolo stylistically may not seem like an ideal match. Washy’s sound is typically rooted in harmonic melodies, while Iandolo has made a name for himself with a more traditional hip-hop technique. Yet, both artists at their core reject the idea of complacency and are enthusiastic to experiment with different sounds, a sentiment that exhibits itself on their recent collaborative effort “Cold Love”.

There are elements of the song’s dynamic instrumental that suit both Washy and Iandolo: it features heavy 808’s blended with a lush piano sample highlighting dark, melancholy undertones. To identify each of these artists as polar opposites would certainly be a stretch, but each of them brings a proprietary approach to the moody trap banger. Vocally, Washy’s melodic, auto-tuned croons contrast beautifully with Iandolo’s aggressive double-time flows. It is also worth noting the abilities of the multi-talented Washy as an engineer; Iandolo’s vocals are mixed perfectly with subtle, sporadic layers of auto-tune that match the gloomy, yet hard-hitting aesthetic of the track. The end result displays an overall sonic consistency in their vocal deliveries.

Both also achieve a cohesion in terms of subject matter, each providing his own interpretation on the concept of “cold love”, as Washy indicates in the hook that it is in fact better than “no love” at all. But what exactly do they mean by “cold love?”

Ultimately, it almost acts as a re-branding of hate and resentfulness. Washy’s commentary stems from those that may appear supportive on the surface, but behind closed doors pass judgement and reflect their jealousy. He also refers to “cold love” as people who only reach out when they need something, but then lack that reciprocation when roles are reversed. He inevitably recognizes a need to reject the toxicity of these actions, including the drastic effect it can have on our perception of what healthy relationships entail.

On the contrary, Iandolo refers to “cold love” specifically in his journey as an artist, claiming those who didn’t support his come-up are the same ones who act like his closest, most loyal fans once he receives “a little shine” and recognition. The imagery of “playing little venues, no one showed up” emphasizes this notion, and is likely relatable for any artist reflecting on early beginnings of their music career. Iandolo’s bars also consider the idea that your hometown often contains your biggest fans, but also your biggest critics, reinforcing Washy’s previous sentiments of outside jealousy.

Washy and Cameron Iandolo ultimately produce a song that is not only instrumentally layered, but attains conceptual depth eloquently executed by both. Sounds like opposites do attract after all.

Stream “Cold Love” on all platforms: