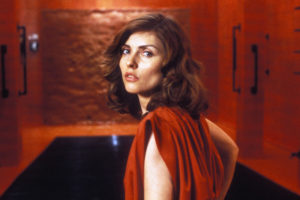 Videodrome unfurls the tale of Max Renn (James Woods), the president of a television channel that is known for being trashy, plagued with violence and sexual programming.

Wanting to amp up his game and change the things shown on his network to attract more viewers, Max discovers Videodrome, programming he believes is being streamed out of Malaysia. It’s violent and shocking, and Max can’t get enough. When his girlfriend Nicki (Blondie vocalist Debbie Harry) stumbles upon the show and goes to audition and never comes back, Max begins to worry, especially when he realizes that Videodrome may not be a television show at all…

Directed by the master of body horror himself, David Cronenberg, Videodrome is a brutally honest narrative that looks deeper into audience obsession and preoccupation with sex and violence. It’s a chilling movie and certainly not for the faint of heart, but absolutely a film to check out. It’s a brilliant piece of 1980s horror that has the shocking brutality and charming horror-camp comparable to Clive Barker’s 1987 Hellraiser, and the eerie atmosphere of Cronenberg’s later film, Dead Ringers.