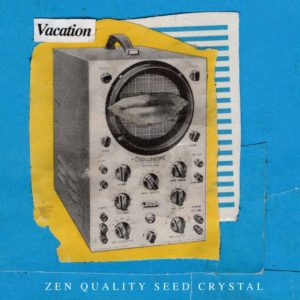 Zen Quality Seed Crystal may sound at first like the name of some stoner’s podcast but is actually the latest collection from Ohio’s Vacation. “Collection” is the keyword here as this is a group of songs ranging from 2016 – 2019 that had previously been unreleased. Calling them odds and ends would be doing them a disservice though as plenty of bands would kill for this quality of fun and off kilter songwriting.

At this point Vacation has already written a few excellent full throttle, rock albums and so with Zen they stretch out their legs a little more with songs that might not fit in a raucous set. “Captain Unsensible” and “Mr. Bathory” are prime examples with the latter spinning a goofy, keyboard waltz and surreal lyrics about ripped out tongues out for a run. The comical but ultimately sincere check in “Chewing Brooms” is the buried heart of this record boasting fantastic, blunt lines cause you say you’re well when you look more like hell sung with a panged desperation.

Any fan of lo fi music will tell you, you have to be willing to go through trenches to discover the gold (Daniel Johnston anyone?) and Zen runs with that idea throughout. What starts off sounding like it was recorded in a bedroom, “Rebel Rebel”(no relation to Bowie) later builds into this anthemic, sing-along chorus. It’s only fitting the infectious, endorphin teaser “Capitol Drive” is placed at the end even though the band wisely released it as a separate single too. Reflecting their flippant attitude, the band has already low key released another album only on youtube but this also reminds me of a line from “Tricks of the big Cat Trade” that would potentially answer any would be detractors , Get off my ass I’m perfecting a craft!