Remember, remember the fifth of November is perhaps the most prominent passage taken from Alan Moore and David Lloyd’s now-infamous graphic novel, V for Vendetta. To many, it is linked to the actions of V’s iconic character, Guy Fawkes – a figure whose resemblance is now plastered about the Internet since being adopted as the symbolic figure for Anonymous.

To others, however, the phrase remains tethered to the events of November 5, 1605, or, the night that the real Guy Fawkes attempted to assassinate King James I with gunpowder stashed beneath the House of Lords. Fawkes was captured that night thanks to the work of an anonymous tipster, thereby deeming November 5th not as a celebration of anarchy but, instead, a celebration of its capture.

It’s hard to think of V for Vendetta (2005) without first considering its source material and then, rather solemnly, admitting its role in creating one of the most toxic images in our present culture. In fact, it’s difficult for those who have neither read the novel nor seen the film to engage with the media as anything more than powder to a meninist powder keg.

As with most media, you take the good with the bad. There will always be fans that make everyone else look a little worse for wear, including the sports fan who destroys private property … or the mind behind Pizzagate.

Yet, for those who who enjoy Moore’s work, one might consider the graphic novel a masterpiece in visual storytelling. The source material is riveting with its view of a 1984-esque London defined by fascinating divisions of its tyrannical government through surveillance sectors known as The Eyes, The Ears, and The Nose.

It’s this sort of world-building and so-close-it-feels-real phenomenon which defines the source as a unique fixture in the world of graphic novels. 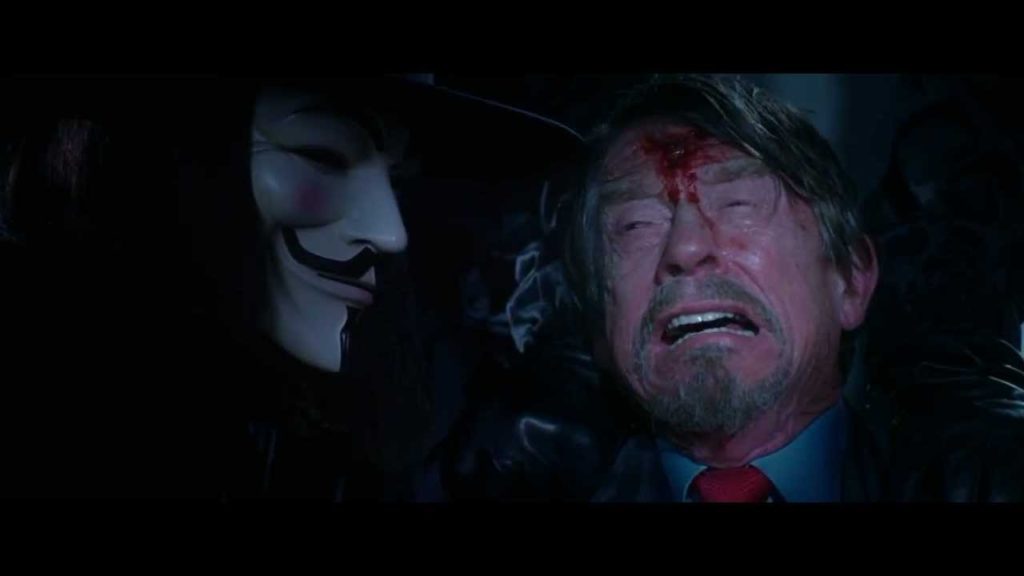 When director James McTeigue brought V to the screen, he intended to use the statement Moore and Lloyd had crafted as a way of providing a form of cultural critique to modern fears of totalitarianism.

Where the original was absent of homophobia and islamophobia, the 2005 film tried to compensate by creating characters who would experience these fears and exhibit the horrifying reality that accompanied them. Ideally, this sort of message would motivate viewers to sympathize with V’s message and perhaps indulge in the explosions and violence that brought change.

The effect of this phenomenon, however, did little to actually advance a progressive platform.

The film glamorizes anarchy and, through its very existence, communicates less of the edgy feel of the graphic novel than it does the cleaner, more marketable image of a Hollywood feature film. This becomes all the more noticeable from a visual standpoint when comparing the gritty look of V’s source material with the unavoidably clean imagery of the film. Unfortunately, this transition makes an attack on the core aesthetic of the original.

But from a conceptual standpoint, the reason this did little to advance any real dialogue has to do with how this film commodified the original message. Guy Fawkes was meant to die as a figure in the source material with his ideas permeated throughout a society of individuals who would collectively overthrow a fascist government.

In the film, this comes across as more of a message that everyone can be their own version of Guy Fawkes. Being a vigilante is justified by purpose.

David Lloyd mentioned that the brand of Fawkes’ face following the film was exciting as it represented a true force for change. But what if that change represents something far worse? What if Guy Fawkes was fighting for the few versus the many? 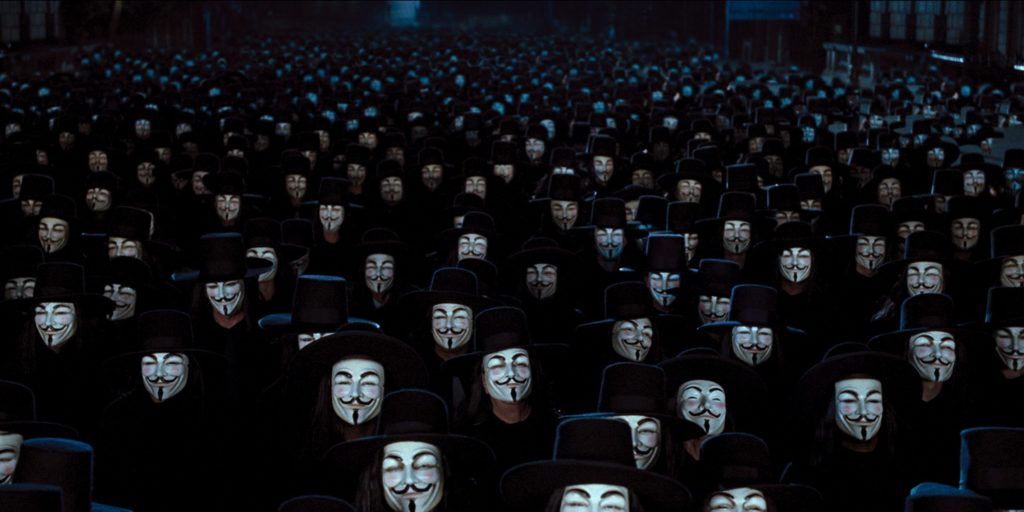 This isn’t to say that the film is any less than a love letter to Moore’s work. Between the Wachowskis’ writing, McTeigue’s competent direction, and Hugo Weaving and Natalie Portman’s presence, there’s a lot that’s done right. It’s just… interesting.

So why should you see it?

As much as this article has critiqued the film, it is still a story worth revisiting, whether it’s through print or video. There is a brilliance that shines through despite its commodified implications which, in a late-capitalist society, justifies your ticket!

Seriously, though, this is a piece of media that should be considered as detached from the brand it carries through modern culture. There are steps that could have been potentially avoided in fostering the now-prominent symbol of people who will purposefully annoy and belittle you at Thanksgiving dinner using memes and whatever they’ve read on 4chan the past week, buuuuuut it’s not fair to place all that blame on the film.

As I mentioned before, Hugo Weaving gives a brilliant performance as the titular V, and Natalie Portman’s range in the film is next to none. The undertones of Moore’s affinity for 1984 really shine in the more crafted moments of the film, as the early-2000s horror will resonate with viewers living through now worse-off versions of the prejudice portrayed.

In short, the film is not meant for those looking for a guidebook to anarchy (you can see that in this quick visit to David Graeber’s thoughts on the film). McTeigue’s version is for us, the viewer. It is a look at what our world might become should we remain complacent which, in some ways, makes the film more horror than think-piece.
V for Vendetta (2005) represents just one version of the world we might inhabit.

(It also has some amazing action.)