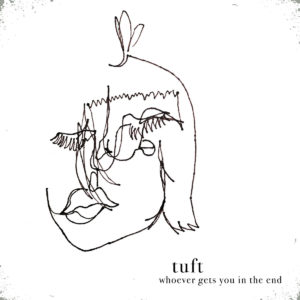 Tuft is a solo project from Teratoma’s Jessica Hesse. Whoever Gets You in the End embodies some of the more endearing qualities of a bedroom project. The songs feel like they’ve been delivered to listeners with minimal interference. The sparseness of their arrangement leaves ample space for Hesse’s lyrics and occasionally layered vocal melodies to serve as the focal point for this collection of songs. While the songs themselves often seem like a reflective documentation of moments that long ago exerted their deepest emotional response, they never feel distant or remote.

Hesse says that “the biggest goal of this EP is to finally do the scrappy little demos I have in my voice memos some justice.” Daniel Radin supports Hesse in this effort by handling production duties and providing additional instrumentation that always complement and never crowds Hesse’s songwriting. Opener ‘Boogerwall’ builds slowly with movement under cycled ringing open notes and peaks with a harmonized moment of resignation. ‘Steel Trap’ is probably the most elaborately produced track on the album, but even here, Hesse finds great balance in knowing how far to push the song’s catchy chorus. Throughout, Hesse shares moments through singular images and recollections, but revels in the use of negative space. The understated title track concludes the album with a sense of calm and warmth.

It’s an easy tendency to fall into for solo artists to overproduce their work during the shift from conception to arrangement, especially if they’re used to working in a group that has to juggle more players and personalities. Whoever Gets You in the End never feels overwrought, the immediacy of its production serves to highlight, rather than obscure Hesse’s strength as a songwriter. Hesse may or may not go on to create busier soundscapes, but Whoever Gets You in the End proves that as an artist, she is more than capable of standing on her own.