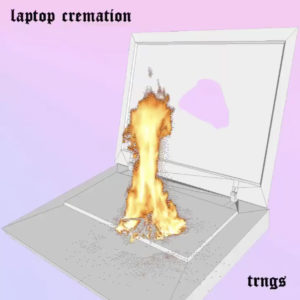 “Laptop Cremation” by TRNGS pulls no punches, it fills your cans with from the first with a chaotic pulse that won’t be doused. Take the album as an invitation to the cremation, to a bacchanal of oscillations of digital combustion and digital corruption. The first track, “ST!F”, is the laptop kindling. Like the other tracks on this album, the rhythms are full of gravity that takes and shapes the chaos of the digital pops of digital kindling into spaces for grooving, moving, burning. All sounds crackle to resonating as pulsating grooves or empty space between flickering embers or like flames clipping at the point of screaming.

“COUGHX”, next, starts off big, with everything roaring. Digital stabs straight to the dome. A freakish voice, spliced up and cascading everywhere. Specters of song escape from the mechanical corpse of the dying. Sounds to me like a metropolis decaying in time lapse, disintegration in the white hot flashes of each moment. An array of materials all crackling in chaos and creating friction against themselves, but set into motion and made a whole by a germinal, insisting groove that doesn’t quit. It’s dance at the limits of intelligibility, and a profane digital ecstasy.

The dynamics on this album shimmer. Like I’ve said, the sound is big and in-your-face, but not like a brick wall, more like flashes and flickers of intensities. Sensitivities like this kept me hooked. “LITHO” is a great example of this sensitivity. The variations in loudness are tempered but bold; atop the digital pops, big textures wax and wane. “ASMR” is another track with great variation. Also, the name is pretty funny. Like a mis-plugged 1/4-inch cable dragged across concrete, whispering its sweet soothing lullabies right into your ear.

Among my favorite parts of this album was how danceable rhythms burst out of the micro-groovy noises which undergird the tracks. The metaphor of a laptop cremation makes these moments all the more vivid. Take for instance “DIPPED”. It’s like a drum machine melting, insisting on a four-on-the-floor bass thud, but with all the auxiliaries going haywire, singing out ecstatic ornamentations as things burn. “CH3ST” has what sounds like deep low 808s in a vortex of crispy/crunchy/chunky sounds, and then suddenly becomes a body-moving throbbing. Claps egg on and enhance this profane ecstasy. In some tracks like this, an idea takes form as a structure, but then clips suddenly into another, helter-skelter, frying off the bits on the hard disc like a record skips. The ambience changes almost completely, but the beat returns and insists again that we dance at this cremation.

And so the laptop burns through to the end. The kindling does not die softly, but burns to the last flicker of whirring whines of sines and analog sound specters. In the end, it might leave your cans chock-full full of digital ash, and your ears a little colored. But you’ll be glad about it—at least I was—because you’ll know it’s a memento of its delightful experimentation, pull-no-punches aggression, and nonetheless insistent groovability. Check it out.