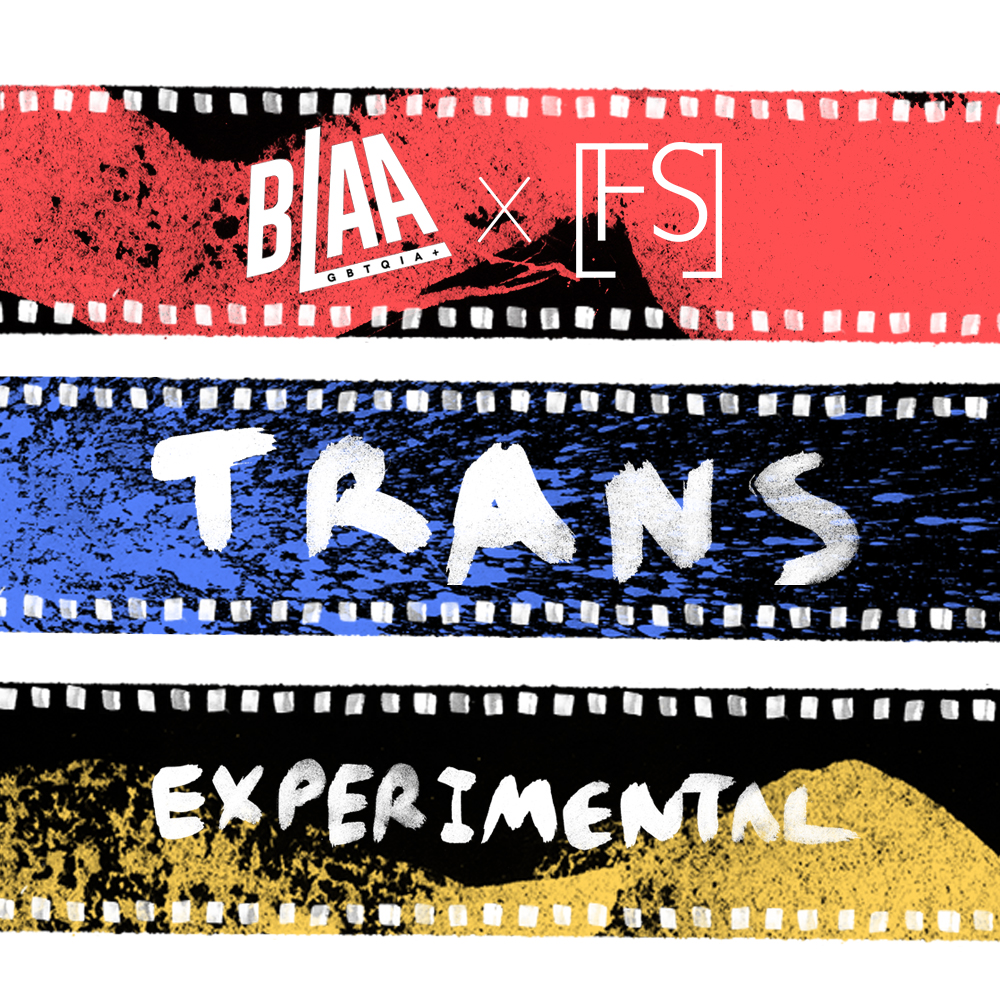 Take controversies, firings, an early retirement, and a couple of untimely deaths, add a global pandemic, mix it all up, and the experimental film scene in Boston, like the old gray mare, ain’t what she used to be. While it’s true that Boston was an important city for experimental cinema for decades, it’s also true that when things fall apart, it’s usually not for nothing. The influence of the figures at the center of the now defunct scene was far reaching, but older white men, even gay ones, aren’t always the best gauges of environmental toxicity, to put it lightly. The grandiose heroics and self-mythology that defined the American avant-garde cinema of the second half of the 20th century, like more mainstream cultural phenomena, are actively being reconsidered. In Boston, younger queer and gender-nonconforming filmmakers are employing the tactile nature of celluloid to accommodate their artistic needs.

Queer people have been some of the most important filmmakers of the avant-garde since the 1930’s, but it is only fairly recently that trans and gender-nonconforming artists have stepped out of the margins of an already very marginalized artistic practice. With the exception of Jean Cocteau’s championing of Kenneth Anger’s first film Fireworks, queer filmmakers works were seen and supported by straight-led scenes. Queers were accepted, or tolerated, sometimes celebrated(with more wonder than respect) by their straight colleagues, which is often what led to them being considered part of cinema history. It is when marginalized people begin keeping their own gates that truly robust creative output can happen, which is obviously difficult to achieve when those people’s very existence is illegal. 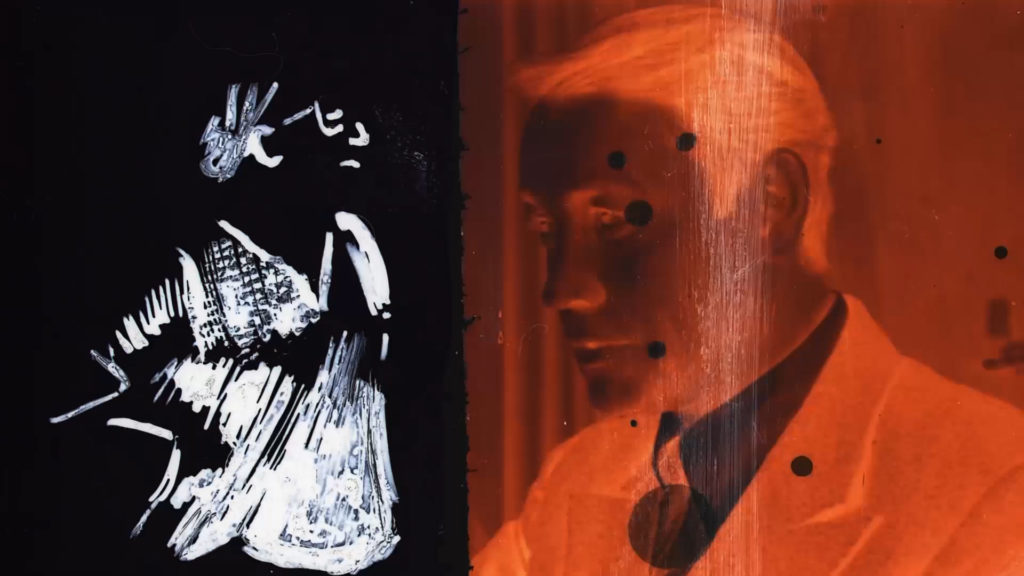 Jack Smith, legendary queer experimental filmmaker whose 1963 film Flaming Creatures was seized by police in early ’64, leading to obscenity charges against its promoters, was known for bickering with with his straight contemporaries who attempted to frame his work based on their own visions of it. Smith, who was once roommates with Tony Conrad, got into fights with Jonas Mekas about how to present Flaming Creatures. Smith believed the film, like the essence of the characters that inhabited it, should be ever-changing and recut with every screening. Mekas thought the film was finished, and should only exist as a finished film. Mekas ultimately got his way, which solidified the work as canon queer and experimental cinema, but which also led to Smith never considering a film to be finished again. It is important to note that Tony Conrad went on to be an influential film professor in Buffalo, NY until his recent death, and Jonas Mekas led the Anthology Film Archive, which built its reputation around films like Flaming Creatures, until his recent death. Jack smith died of AIDS, in poverty, in 1989.

When groups of people are oppressed, or suppressed, as history accumulates around them, cultural developments are made without their input. Because of this, revision of established visual language, among lots of other things, is of great importance. It is this type of revision that is at the heart of Trans Experimental, the new group exhibit organized by BLAA(Boston LGBTQIA+ Artist Alliance) at Fountain Street Gallery in the South End. The five filmmakers in the exhibit each use the qualities of photochemical film(now largely considered a nostalgia-inducing novelty in the industry, other than by people like Quentin Tarantino and Paul Thomas Anderson)to create contemporary re-imaginings. Terrain thought to have already been explored is reexamined, searching for what was overlooked in the first consideration. 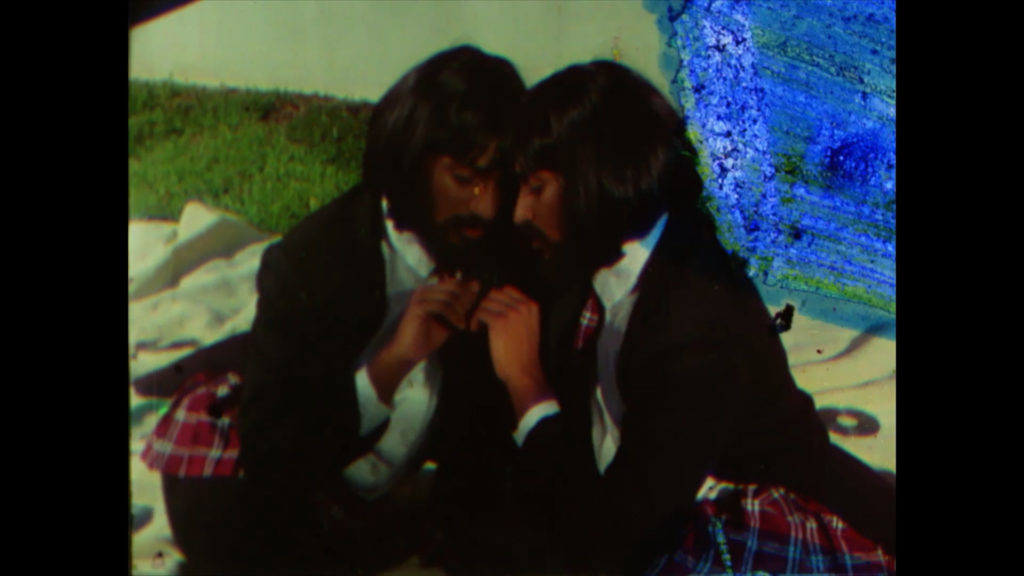 Still from “Feelin’ Myself” by Edward Perkins

Gina Kamentsky’s film Stunting Cunts uses rotoscoping and other direct animation techniques to generate imagery reminiscent of films by Robert Breer, but which celebrates the filmmaker’s trans body, embracing her physical and psychological self as she approaches her 60th birthday. When these techniques were first being explored by early experimental filmmakers, no such representations or celebrations existed, and so even the deepest explorations of form could only offer cis-heteronormative content.

Edward Perkins’ film Feelin’ Myself uses single frame, in-camera editing to create a percussive visual dive into queer self-admiration. The pacing feels like one of Kurt Kren’s structural films of the Vienna Actionists. The colors of the reversal film add to the dated look. But it is the contemporary fabulousness of the subjects and their poses that inject the film with today, giving the appearance of history being rewritten. Reverie uses multiple exposures and hand-processing to create a dream realm where femme girls are perpetually getting ready to be cute for no one but themselves. 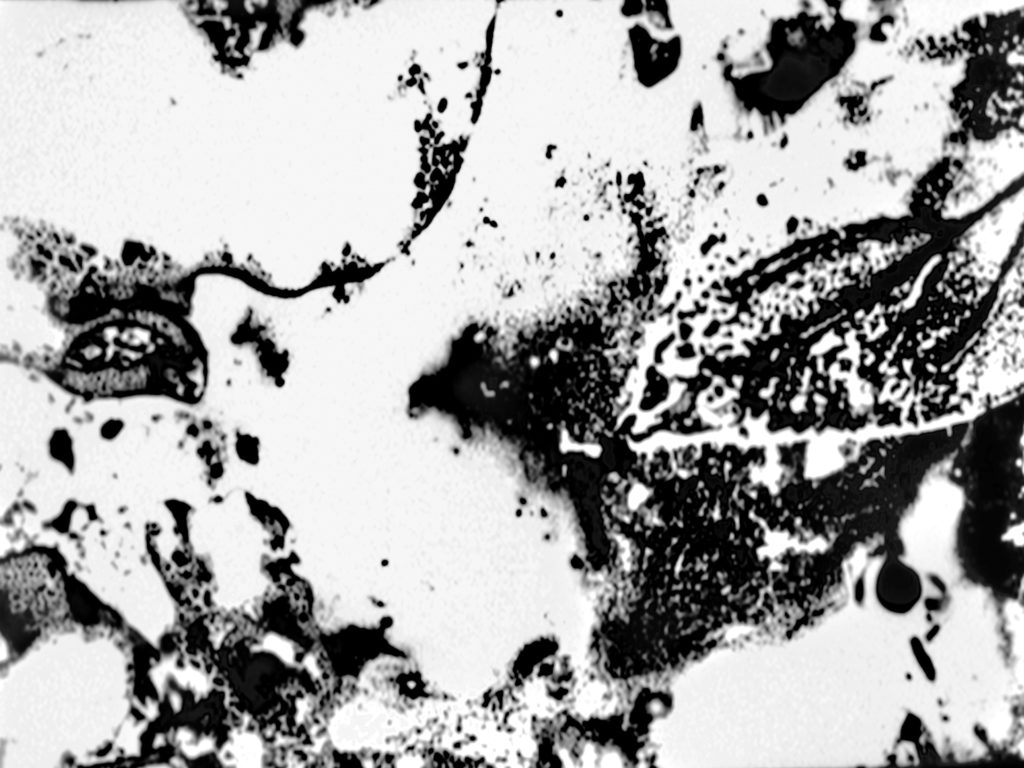 Gabby Sumney and Hogan Seidel both navigate expanded cinema and hand painting and manipulation to achieve very different personal results. Seidel, who curated the exhibit, creates, in their film Herackles and Torn Silk, a study of perceptual variation by pairing very similar source imagery side by side, with each image having been manipulated in ways drastically different from the other. Extreme close-ups of palms, fingers, and nondescript hairy body parts flow through the frame either with luscious pinks, purples, and blues or, on the other side, in high contrast black and white. Occasional moments of color or black and white seep into their opposite framing, creating blissful moments of visual unison. 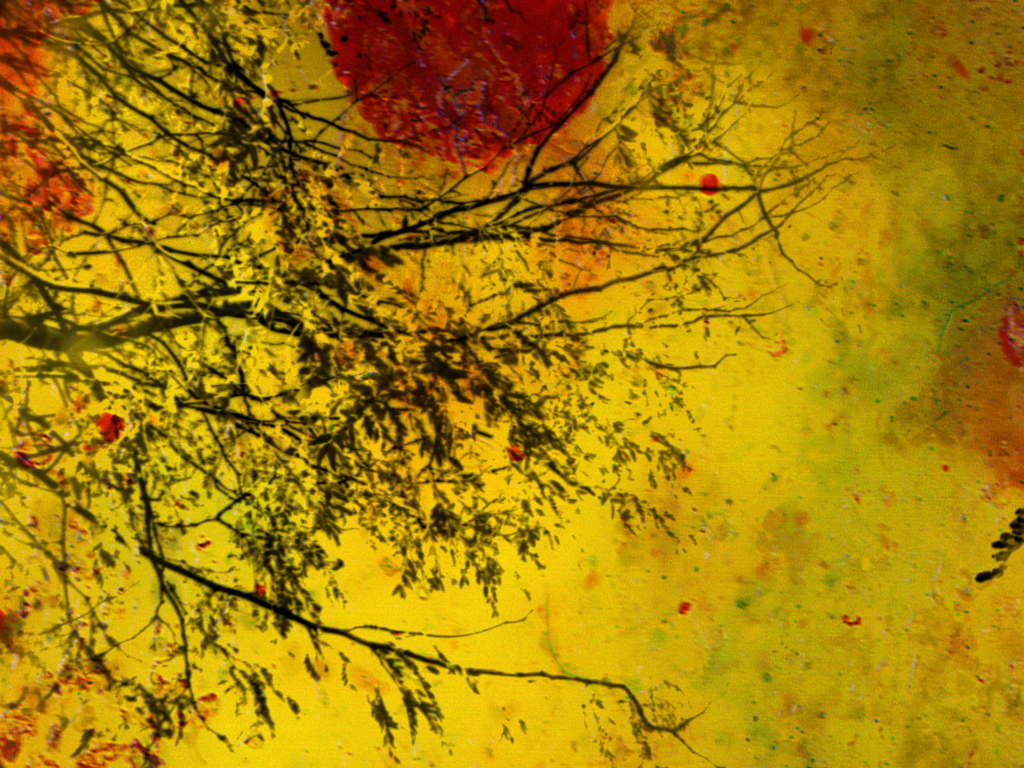 Sumney’s double image film, Watching the Leaves Age As I Do the Same, is a meditative personal document that mixes painting and chemical manipulations with beautifully shot, unmanipulated 16mm footage. Images of the outside viewed from windows seem universal enough, but are then fused with vibrant neon colors. Autumn leaves and the filmmaker’s eyes are carefully scrutinized so that the connection between artist, subject, and the final work onto which these connections manifest become impossible to separate. The century-long history of American avant-garde film is very present in Sumney’s piece, and various quotes from the dead are recontextualized to the experience of an Afro-Latinx queer artist with a disability. 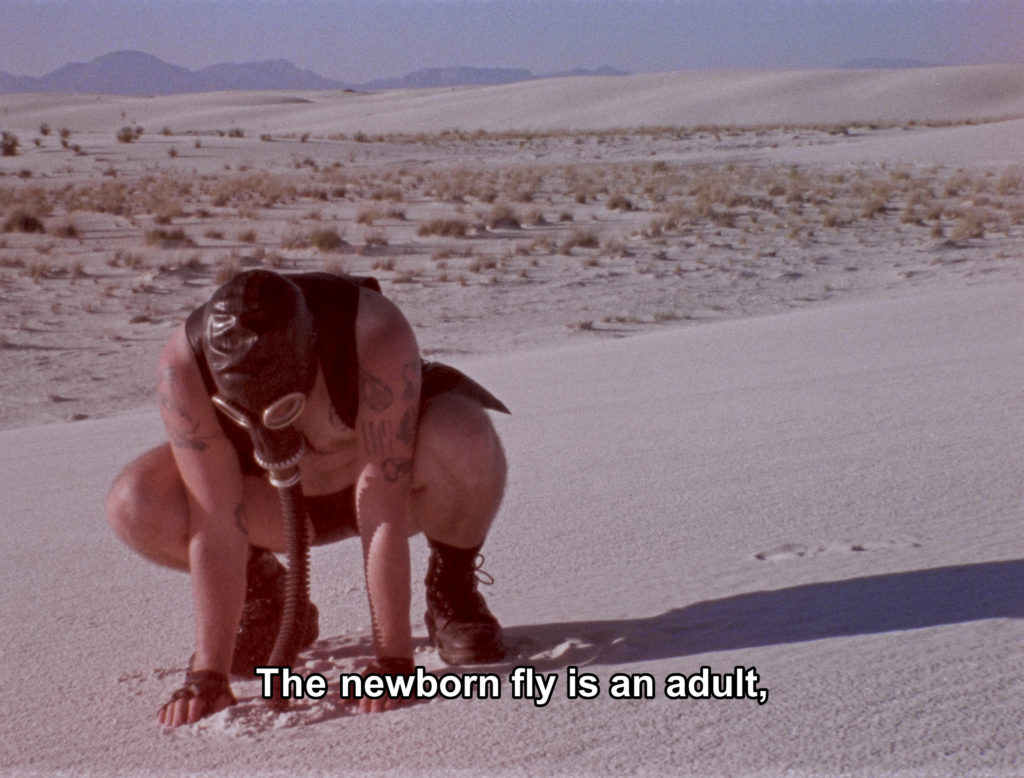 Finally, Malic Amalya’s film Run uses the perseverance of the fly in a nuclear holocaust as a metaphor for queer survival in a society permeated and aesthetically influenced by war. Part document of tourist activity, part study of the architecture of nuclear weaponry, part queer American beauty pageant, the film plays around with ideas about what survival and culpability look like for queer Americans who exist on the margins but who are still indelibly American. Queer people have not only always existed, but have always been in the bloodstream of the collective unconscious.

Check out these films, which bring consciousness to what has always been, before the show closes on April 10th. And check out all of the filmmakers.

“Trans Experimental is a group show of experimental film and animation by trans, Non-binary, & Gender Nonconforming artists in the greater Boston area. Experimental film deals with perception, abstraction, non-commercial techniques. This includes photochemical abstraction, hand-painted animation, digital glitch work, found footage collage, and many other techniques. Many trans artists find solace in practices of experimental film that are based on the tactical, the degradation, and the reclamation. This work lends itself to reflect on the trans body and identity.”