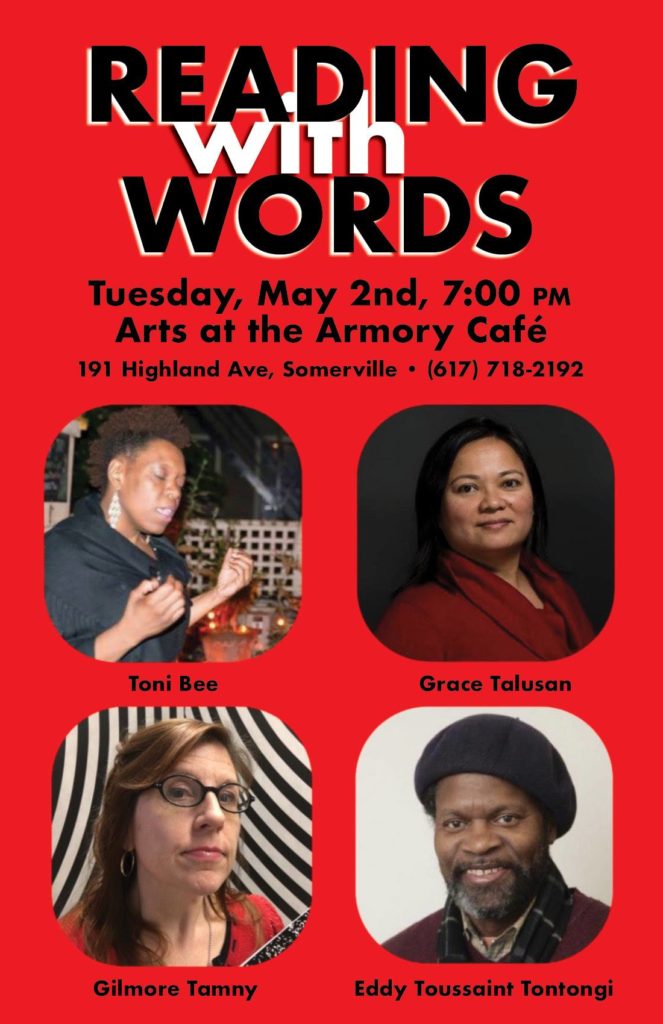 Tonight, May 2, 2017, the Arts at the Armory Cafe is hosting a reading of words by local artists and writers, Eddy Toussaint Tontongi, Grace Talusan, Toni Bee, and Gilmore Tamny.

Bios:
Toni Bee is a writer, photographer, community advocate and mother to a 15 year old daughter.

Bee was the 1st woman elected as Poet Populist of Cambridge,MA (2011-2013). Since becoming the 2016 Inaugural Poetry Ambassador of Cambridge, she has contined to lecture as a teaching artist in colleges, local schools & at Boch Theatre of Boston with The City Spotlights teen leaders.

She will be on a panel hosted by Chad Parenteau called Motherhood & The Muse at this years Massachusetts Poetry Festival in Salem, MA.
Toni Bee will publish her first poetry book entitled 21 Again in spring 2017. EMAIL her at [email protected]

Her essay about hereditary breast and ovarian cancer won the Dorothy O’Connor Award from the Women’s National Book Association, and other essays were honored in the Best American Medical Writing and on Longform’s Best of 2015 list.

She was awarded a Fulbright to the Philippines, a grant from the Massachusetts Cultural Council, and residencies to Ragdale and Hedgebrook. She teaches writing at Grub Street and Tufts University.

Eddy Toussaint Tontongi was born in Port-au-Prince, Haiti.
Poet, critic and essayist, Tontongi writes in Haitian, French and English. The author has published, among others, “Poetica Agwe: Poems, Essays, and Testimonial on Resistance, Peace and the Ideal of Being”​ (a trilingual collection of poems and essays, 2011); “Critique de la francophonie haïtienne”​ (a bilingual socio-linguistic collection of essays about the relation of power between French and Haitian Creole in Haiti, 2007); “The Vodou Gods’ Joy / Rejwisans lwa yo”​ (an epic bilingual poem, 1997); “The Dream of Being”​ (English, poetry, 1992); “Cri de Rêve”​ (French/Haitian poetry, 1986). His newest releases are: “La Parole indomptée”​ (“The Untamed Speech”​ a bilingual collection of essays, 2015); “Sèl Pou Dezonbifye Bouki”​ (“Salt to Dezombify Bouki”​ (essays, 2014); “​In the Beast’s Alley” (a collection of his “poems of conscience.” 2013).

Tontongi is the editor in chief of the publishing house Trilingual Press and of the trilingual, politico-literary journal Tanbou (online : www.tanbou.com )

Gilmore Tamny is a writer, musician, and artist living in Somerville, MA.

Her novel My Days with Millicent is being serialized online at OhioEdit.com and she has a regular column at the Boston Hassle called LIVE AT THE GILMORE. Her essays, artwork, stories, interviews, and poetry have appeared in various literary magazines.

She plays with the band Weather Weapon as well as performing solo instrumental guitar work. Her video performance of “THUNDER KITTEN THUNDER” was shown in the European Media Arts Festival in April 2016.

The Unnatural / The Shits

The band that never was.