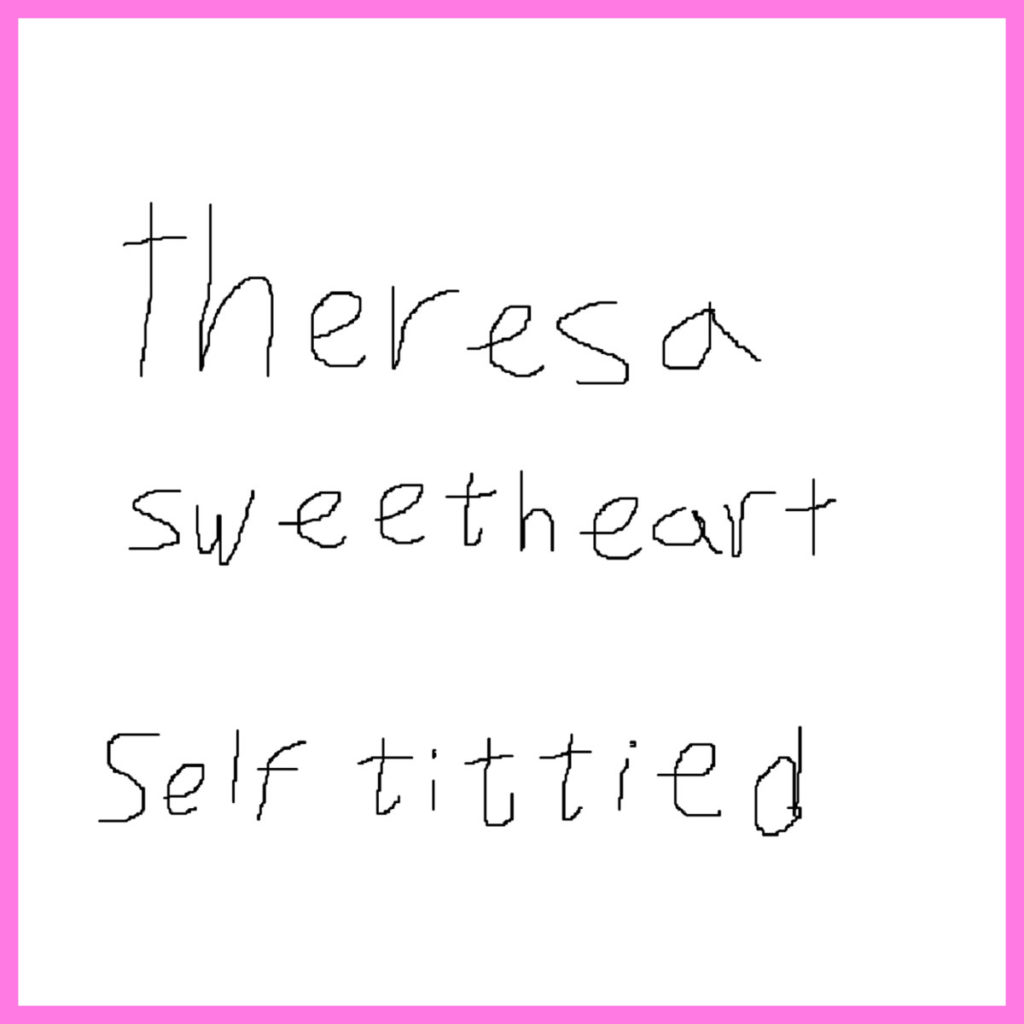 Theresa Sweetheart is just a small town girl doing her best out in the midwest, and “Self-Tittied” is a pop piece from the wonderful in-betweenness of all things moving. Finding momentum fueled by the fuzzy wellsprings of lo-fi rock, she sets a constellation of memories and emotions in motion: she’s staying, she’s running, she’s here, she’s there, and driving on in Minneapolis, MN. She talks about relationships, identity, economy, and irony. What comes out of it all is an unapologetically fun, forward-moving, no-frills, honest-enough (because what’s honesty in artistry anyway, so she might ask…) and ultimately rocking little record for your listening pleasure.

Theresa explained to me that the album’s been released, so what people make of it is out of her hands. That’s not to say that she considers it to be some false ideal, like “music itself” with no connection to her particular situation. Identity does play an important, albeit somewhat ambiguous, role in the conception of this project.

Although “Theresa Sweetheart” is an artist persona, Theresa is, in “real life,” a trans woman, and the title, “Self-Tittied,” signifies this (besides being a funny riff on the trope “Self-Titled). She told me, “I am trans, I am a trans woman, or that’s at least what I like to call myself. I think that’s the most direct allusion to Theresa Sweeetheart’s status as a trans woman. That is something that I’ve been recently trying to navigate in my life, and I think that it’s something that Theresa Sweetheart has been dealing with herself.”

From what she told me, the humor of the title—the idea of being ‘self-tittied’—is a sort of performative statement and enactment of the autonomy of people to assert their own identity in the world. What does it mean to be self-tittied for Theresa? “I think the self-tittied is becoming a lot more, y’know, metaphorical or existential in that sense. Like, I am declaring myself to have titties, if that makes sense.” She’s conscientious of the precariousness of such a position, insofar as it opens her up to criticisms of “appropriating femininity,” in her words, or reducing femininity to sex organs. Despite some anxieties about this, the reception has been positive thus far, she says. For instance, “there was this one person I met in the Twin Cities, and she said that she thought it was hilarious. In fact, when I did a live performance of some of the material for this class/workshop thing that’s called Beats By Girls (—that’s a very good organization, I won’t dive too deep into what it does but people can Google it—) when I was performing for that organization, there was some questions, and she made a point to ask me, ‘tell everyone what the name of your album is called’ so I think that people think it’s, like, funny. Which is great. I like it when people think that things are funny.”

Much of the diffuse feelings swirling under this album emerge as themes of relationships, economic anxiety, the conflicting feelings of being at once trapped and at home at once in a city, and critique of some of the more ironic elements of participating in lo-fi aesthetic and scenes, especially as an unsigned, independent, DIY artist.

I was curious to learn more about all of the lyrics concerning motion: going, coming, staying, escaping, and so on. Theresa explained motion to be very important because motion keeps relationships together and also pushes people apart. It keeps people bound to a place, or pushes people away; motion, or lack thereof, can make a space a home or like flypaper. She said, “I’ve met some wonderful people here; but at the same time, it’s a city that’s sort of clouded with memories from the experiences I had at college, which is sort of near Minneapolis. A lot of people from college have moved out to the city, so really trying to navigate these memories has been kind of tough for me as a person. I’m sort of confronted with my past in this city, and I’m confronted with certain visions of the future….and it’s so fucking cold, dude! The weather sucks.”

The aesthetic of lo-fi is, in a significant way, the medium for the messages of Theresa Sweetheart, at least as she understands it. She told me that the unapologetically lo-fi musical aesthetic of the album was the initial impetus behind this project, which is a sonic departure from much of Theresa’s material released under other monikers. She explained to me that “how it really started is me and one of my housemates had this plan to make a fake label, and one of the characters on this label was going to be basically making fun of Mac DeMarco and the whole lo-fi indie shit.”

Theresa made a bunch of instrumentals which were originally supposed to be for her roommate to sing over, but that project fell through. It was serendipitous, though. As if organically, the pieces began to resonate with her and take the shape of something much more personal than she had expected. Besides identity, the production aesthetics of lo-fi became a sort of sounding board for exploring ambiguity, expression, irony and economy in the current North American DIY creative milieu. In particular, as a musician who worked for this album almost exclusively in the DAW Fruity Loops, she’s fascinated by the ironies of technologies of sound production and the lo-fi aesthetic. What’s the deal with all of these people dropping piles of cash to try and seem as if they don’t belong to a privileged economic class?

Theresa said, “You know Mac DeMarco’s stuff and it’s all like sadboy bullshit, right? I think that does sort of lend itself to talking about feelings of guilt. ‘Oh, I’ve done something wrong, I just want to be forgiven! So sad cos no one likes me! Oh, dear!’ Things like that. So that did start to get the brain moving… For better or for worse, despite being a woman, I do feel like kind of a sadboy sometimes, y’know. I’m a sadgirl, and certainly I have issues that I’m working on, as we all do. And, I guess what had happened was that I really fell in love with the music I created.” Part of the fun for her was exploring the possibilities for emulating the sort of lo-fi, DIY aesthetic created by artists like Mac DeMarco and Kevin Parker of Tame Impala, but—ironically—on a budget.

“You know Tame Impala? It gives this impression of being like a very lo-fi, DIY kind of thing, even though Kevin Parker is rich, he’s loaded. He has a lot of money, he has a lot of resources, but I guess because of how the music sounds it comes off as being very lo-fi and DIY, and it’s very clean and stylized nonetheless. It’s not rough around the edges in the technical details of the music, and the same with Mac DeMarco—although less so. DeMarco has his one bedroom apartment that he like sits in and has a bunch of gear. I guess I just find it interesting that there are a bunch of musicians who do make substantial amounts of money but have built their aesthetic around being kind of poor. Even if they’re not explicitly saying that, it’s a vibe that come across. It kind of tends to like make class invisible in some sort of way, if that makes sense. And this is less so with Tame Impala, since Tame Impala just sort of like ignores class, and is just sort of aping The Beatles, but with Mac DeMarco, he wears the overalls, he drives the shitty car around, y’know, he’s doing all that stuff.”

Theresa went on, “I think in particular with something like the aesthetics of lo-fi, I think it’s very interesting because, I forget the name of the guy who said it but there’s a dude who said that ‘the medium is the message,’ right? And the thing with the computer is that the computer is that, almost to a T—and I say almost because obviously it can’t do it perfectly—the computer can more or less emulate any media, is fundamentally what we realized. So going back to those kinds of noises that you were talking about, right, there are sorts of noises and qualities that are associated with the whole DIY, lo-fi, that signify that the music was made on shitty gear. It’s interesting because we’ve gotten to this point where being actually DIY and making music while you’re broke is now about getting a laptop and pirating all the software…and now having all of that old school crusty gear isn’t really like lo-fi or DIY any more, because you need all this money to really be able to use that gear effectively.”

The lo-fi aesthetic wasn’t born out of the fetish-collecting of vintage analog gear; in part, it emerged from conditions of actual limitation and necessity before the development of our current digital technologies, and became an aesthetic discourse that nonetheless continues to reproduce itself into an era of high-quality, relatively low-cost (and, in the case of software, easily pirated) sound reproduction technologies. But the sonic imprint of its aesthetic—the noise impinging upon the signal, the low bit rates, the tape compression, the squeak of an oaken chair—points to an imaginary economic and/or technological insufficiency, which unfolds for many—for better or worse—as a kaleidoscope of tales of origin and authenticity and intimacy. Theresa, who works at a call center to support her musical endeavors, considers herself as working within substantial financial limitations. She’s at once interested and moved by the aural and social aesthetics of this sort of music, but disenchanted with the disingenuous contradictions regarding class. She’s trying to poke fun of it, but to also take part in its simultaneous, almost-delightful ambiguity.

In the end— which is to say, until you hear it and make of it what you will —“Self-Tittied” is a fun, tight, well-done album with catchy hooks, quirky and introspective lyrics, and a wonderful melange of synthesizers and guitars and drums. Her take on the sound really suffices to encapsulate it: “I don’t know man, rock music is fun. And that’s the thing, rock music has always been fun. Don’t get me wrong, dance music is fun too, but I think, like, especially with a lot of the lite, airy, and fast post-punk shit…like that shit’s just fun. You can’t really mope to dance music. You can’t have this kind of, like, ‘I’m just driiiiivin’ thru the sunset, and I feel silly about my life, and I feel complicated about my life, but I’m also like pumped and I’m trying to get away, and I’m opening up this future of potential.’ I think a lot of rock music has a very distinct like, ‘I’m sad but I’m not sad’ quality to it. Rock music is fun!”

Hell yeah, it is. Check it out.