The Stampede initially a trio for their debut record have added Mark Goveia (yes, brothers) on percussion and Kevin Smith on keyboards/synth. The band has never been truer to their name as on “A Marvel of Idiocy.” The tasteful rhythms Mark adds to the monstrous Bonham drum style of Chris Thelen, and the gluey keys/synth Kevin adds at the edge of every mix weaves a tapestry of epic. The sauce is thick. Thick like early Queens of the Stone Age and in the heavier moments, Kyuss.

Tony Tempesta on bass plays as nimble as he is solid in the pocket. Check out the movement created by the rhythm section on ‘The Reaping Song,’ arguably the sexiest track on the record; well a sexy nightmare anyways, all eight minutes and fifty six seconds of it. The song pays homage to the Stephen King novel Wizard & Glass. Eat your heart out Dark Tower fans and read the lyrics!

“Mind Evaporator” is a personal favorite with its unabashed fuzz riff cutting over top a stank face sludge groove. In the chorus Mannie shouts, “It washes away my struggles” sounding as if he’s on the edge of losing grip on a lit stick of dynamite. The passion that exudes is the raw material the music goosebumps are made of. 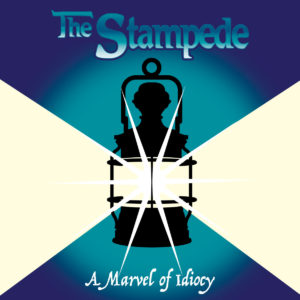 The funk rock guitar in “Calculated Risk” phasing off and into the tight snare attack of Chris Thelen highlights the deep connection between the founding members of the band. Aside from the meaty guitar hooks, grooves, and gnarly in-your-face vocals are the bridges and jams throughout the album. There are some long plays on “A Marvel of Idiocy.” Each tune has the potential to turn on a dime and venture into a psychedelic jam orchestrated with hits and stops destined to surprise you before it takes you back to the hook. Nowhere is this more prevalent than on the closing track, “The S.S. Shitstorm.” Just over eleven minutes it plays like a dark epic from a Doors record, especially with the flavors of vintage keys whirring along.

If you like your whiskey to burn and your rock n’ roll to split wood be sure not to sleep on the masterpiece that is “A Marvel of Idiocy”. Catch The Stampede live streaming online August 24th in support of the Boston Local Music Festival (City Hall Plaza 9/28-9/29).

Liked it? Take a second to support Mike Moore on Patreon!