Of all the genre’s myriad hyper-specific subsets, “regional horror” is perhaps the most nebulous. Unlike more prominent subgenres — slasher flicks, monster movies, underwater Nazi zombie films — this strain is not defined by any particular code of tropes or elements. Instead, regional horror is defined roughly by an intersection of production circumstances — always independent, generally shot on location outdoors or in crewmembers’ houses — and peculiarly personal viewpoint. Some regional horror films are transcendent (Night of the Living Dead, Texas Chainsaw Massacre), others are riotously awful (looking your way, “Manos” The Hands of Fate), and most fall somewhere in between (for a more in-depth primer, check out Brian Albright’s Regional Horror Films 1958-1990, or Arrow Video’s wonderful box set The American Horror Project Vol. 1). All are united by rough production values, loads of personality, and, frequently, startlingly visceral shocks.

All of these elements are present in The Pit, Lew Lehman’s utterly batshit Canadian-via-Wisconsin cult classic, currently making the rounds in an inexplicable-but-welcome digital restoration from Kino Lorber. The plot concerns young Jamie Benjamin, a possibly autistic, obviously sociopathic twelve-year-old put in the charge of a new nanny while his parents are on vacation. Jamie is, in the words of his neighbor and local librarian, “distressing”: moody, vindictive, with few friends and a sudden surge of hormones. Predictably, this leads him to obsess over his nanny, leaving creepy love notes and offering to tell her his deepest secret. Less predictably, that secret involves a pit filled with shaggy, flesh-eating humanoids (which he calls “Tra-la-logs”) in the woods behind his house. Eventually, Jamie makes the natural progression toward feeding his enemies to the tra-la-logs, at the behest of his disgustingly ratty, possibly sentient teddy bear. 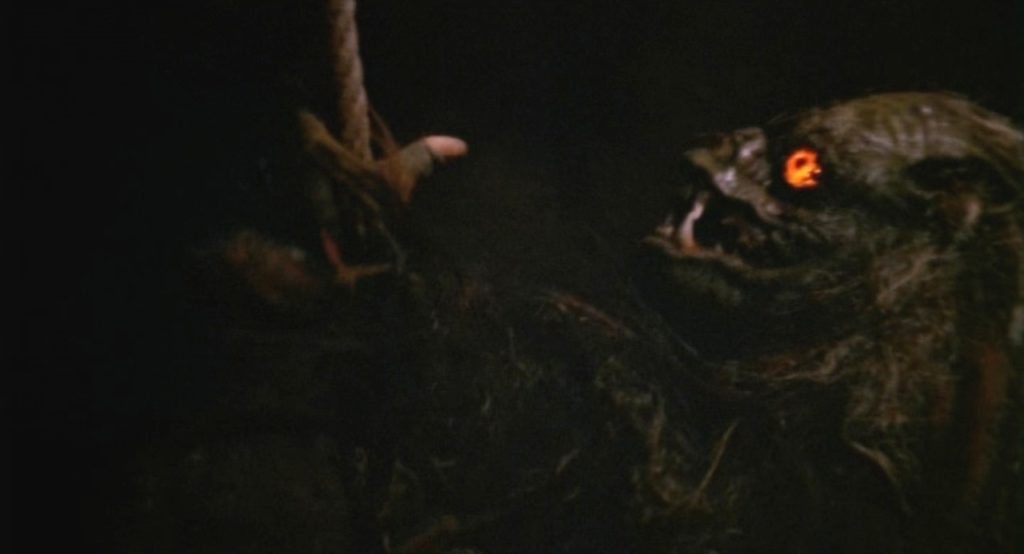 In case it’s not evident, The Pit is a weird fucking movie. Plot points arrive abruptly, characters appear and disappear seemingly at will (Jamie himself disappears for about fifteen minutes near the climax), and major storylines are left oddly ambiguous; we never learn the story of how Jamie discovers the tra-la-logs, and Teddy, who seems to be plainly a manifestation of Jamie’s subconscious, is once shown moving by himself, with no subsequent explanation. The plot jags sharply from edgy, grounded psychodrama to broad, whimsical comedy (curiously, the latter kicks into high gear when Jamie becomes a murderer), and the lush score would be more at home in a Dick Van Dyke vehicle than a grimy exploitation film. As it turns out, there is a reason for this tonal whiplash. Screenwriter Ian A. Stewart initially penned a dark character study in which the monsters were most likely figments of Jamie’s imagination; Lehman disagreed, and added a third-act rampage which dispels any doubt (and suddenly introduces a team of comically bumbling cops). By any rational metric, The Pit is a mess.

But the joy of regional horror films is that they have the freedom to defy rationality. The Pit may be ludicrous in many ways, but its ragged intensity and dreamlike unpredictability make it genuinely unsettling from start to finish. Sammy Snyders, who plays young Jamie, might not be good in the traditional sense, but as a vehicle for off-putting intensity, he’s great. And while Lehman and Stewart were clearly at odds with their visions of the film, they both clearly had visions, and both make it to the screen in vivid colors. While such advances as the internet and digital video have in many ways democratized the filmmaking process in recent years, our constant connectivity has sacrificed the vacuum which allowed films like The Pit to create their own fascinating language. Like young Jamie Benjamin, isolation made regional horror weird, funny, fascinating, and, yes, distressing — but in the best way possible.