In his early years, Henry Selick was an animator at Disney. He learned many talents, ideas, and techniques from the acclaimed studio’s team. It was there that he crafted his artistry for his later works. The Nightmare Before Christmas is his most acclaimed film, one that is constantly discussed during both Halloween and Christmas. From afar, it’s a light-gothic animated film about the holidays. Up close, there’s much more to discuss and take in. For many years, I was told by my father this movie was the worst, but when I watched it at a friend’s house during 8th grade, I learned it is something wonderful.

It’s not just Selick’s detailed eye that brings the whole thing together. The over 120 workers on the film brought its beautiful world to life. Though much of movie is made up of strange creatures in a horrifying land, it’s a marvel to look at. You cannot help but take your eyes off Jack or Sally to admire the scenery. I urge anyone to delve into the behind-the-scenes work of the film (or any stop motion movie) to see how much work went into it. The locales and characters are memorable. Each area has its own identity. Town Hall of Halloween Town is brimming with world building, create a space that viewers can hook into. Nothing about it looks boring. As a viewer delving into a new fantasy world, you want a world you can latch yourself to. The team behind the film excels in every way. Smaller spaces also tell a lot about characters. Doctor Dinklestein’s laboratory is filled with wild, electric experiments, whereas Oogie Boogie lives in a bizarre casino land. Not a single area of the movie is ignored, even when we go into the “real world,” where Jack delivers presents during the night. 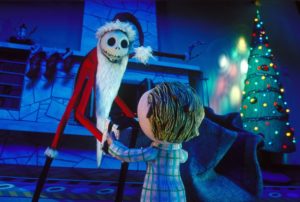 Jack, for me, is a character easily relatable as time goes on. As a kid, I just thought he was this amazing character with all sorts of charisma and ambition. He still is that as I grow older, but I view Jack as someone who desperately wants to get out of the dark place they’ve grown comfortable in. He wants to give his black heart some kind of light, and I think the idea to take this kind of character, put them into a holiday setting, and give them that kind of hope is well done. I feel happy every time I watch this movie. When we see Halloween Town start to see that it’s alright to crawl out of their cave into a new way of living, it warms my heart. Jack also had about four hundred different heads that the animators used. Crazy.

I can’t not mention Danny Elfman’s phenomenal score. The way he can transition from a menacing opener like “This Is Halloween,” to an emotional performance of “Sally’s Song” by Catherine O’Hara, to the jolly “What’s This,” is something he executes with little effort needed. Elfman is a master at his craft to create Hollywood scores that are not just easily identifiable as his, but also pieces that are admired for years after the release. Again, the way the animators have these characters perform the songs is incredible. The opening sequence and Oogie’s song are the top ones, in my opinion, but you can say any of them are standouts and you’d be right. It’s hard not to fall in love with The Nightmare Before Christmas. I can watch this any time of the year, sing every tune, and have a giant smile on my face like I’m a little kid again waiting to open Christmas presents.