The Night of the Hunter (1955) is one of the ballsiest films I’ve ever seen. Seriously, if you’re looking for something on the cutting edge of modern cinema but still restrained by a pre-contemporary cinema style, this is your shit. 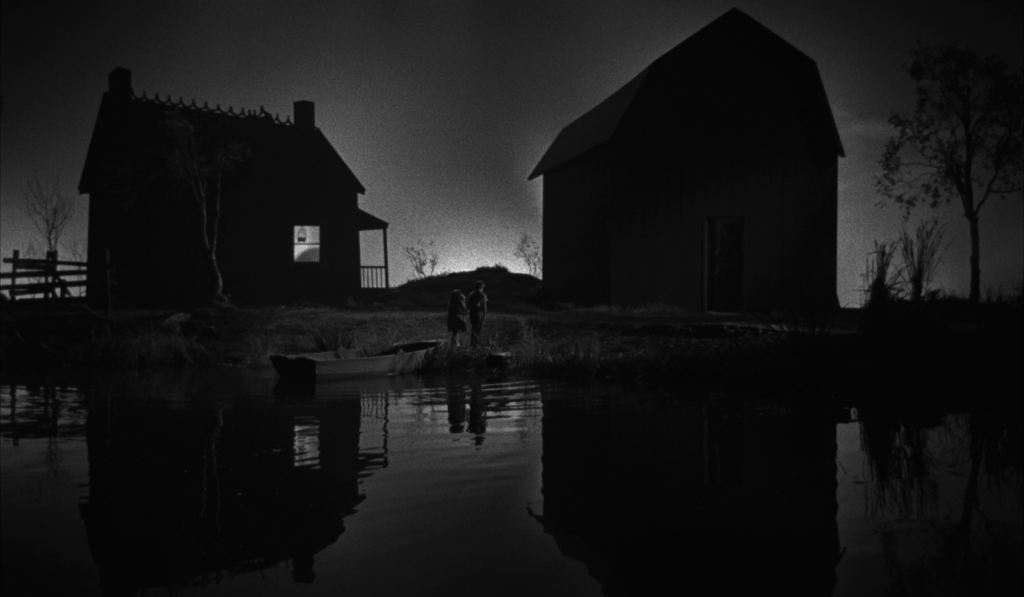 For those who don’t know, it’s a story about God, money, and the funny power children have in taking a lesson and running with it. Yet the fact that The Night of the Hunter deals with religion is almost cursory to the person it applies that value to, as the film works to unpack the idea of vindicated theology paired with outright misogyny. In hindsight, it’s a picture that works very hard to sell you against the idea of a John Wayne-type figure and challenges the normalcy of scumbags just trying to make a living.

That idea is conveyed through the primary antagonist, who frankly should be iconic in the world of heroes and villains, as he is multidimensional, flawed, and (everyone’s favorite) an absolute agent of chaos. This character, named Harry Powell, is the kind of dude who has LOVE and HATE plastered across his left and right hands and uses this not as a way to assume an ultimate image of evil, but rather as a way to adopt the image of a peaceful preacher using the spirit of 1950s Americana as his most dangerous weapon.

I think that it’s this criticism of manhood and religion that makes The Night of the Hunter something far more remarkable than a Citizen Kane, as it showcases substance and form and really does something with it in a way that has lasting value. Watching this film is a lot like watching a modern thriller, with extravagance removed and form taking precedence. The visual storytelling feels fresh and robust, while the acting is extremely next-level. I mean, just off the top of my head, I can assure you that Robert Mitchum brings a unique and terrifying presence as Harry Powell while Billy Chapin presents a rogue-ish kid that will have you rooting for kiddos instead of dreading their appearance on the screen – he’s an excellent mix of child actor and lovable/affable hero. They are both definitive measures of the best hero and villain. 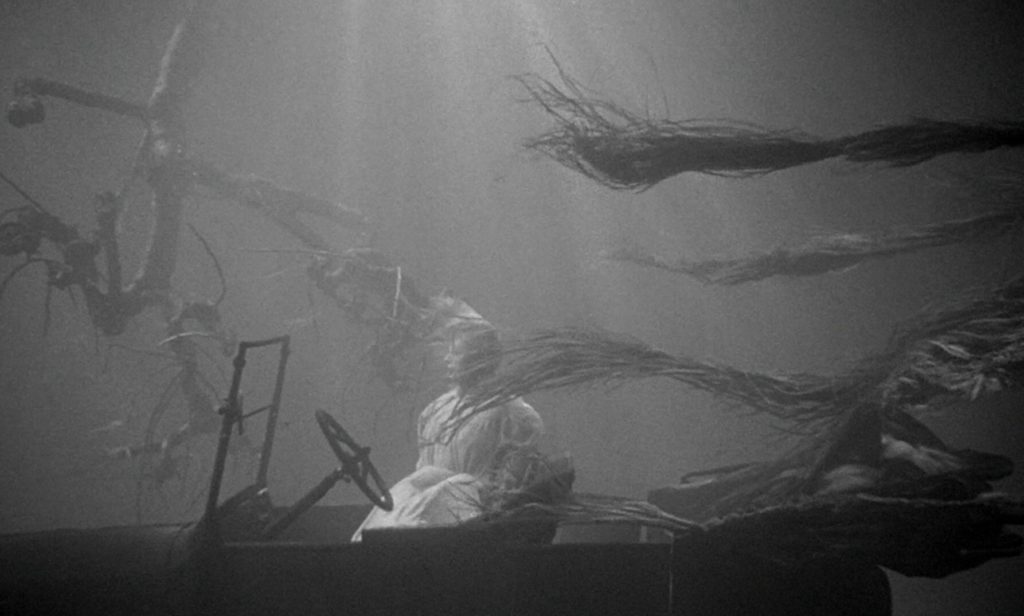 There are also moments that are both intriguing and visually satisfying, between the opening image of a celestial backdrop, sprinkled with the character of Rachel Cooper and her band of foster children relaying a powerful story lifted from the Bible, which wraps around the film and foreshadows the mayhem to come. There’s also the underwater shot of the mother Harry Powell kills in his search for more money – an image which is both haunting and impressive given the time period in which it was produced. But nothing takes the cake more than an image of Billy Chapin’s character staring out of the barn he and his sister have commandeered for the evening and seeing the haunting image of Harry Powell perched on his horse, watching the children from afar and plotting his next encounter.

Ironically enough, this was the image which first introduced me to The Night of the Hunter. I remember wandering in on my roommate watching this bizarre black and white picture conveying a story I wasn’t familiar with and showcasing some of the strangest sights I had seen from a film of this era, when suddenly the image of Harry came to the forefront and forever defined my experience with this film. Even today, as I write this piece imploring you to see this film (if you haven’t already), I am haunted by this picture and reminded of my deep fear of being abandoned in American flatlands (a total aside, but also a very valid reason for being creeped out by a film like this).

There is a question posed here, however, about the lengths people will go to for greed, along with humanity’s hunger for the next bigger, stronger role. I am definitively placing a value on the film that may not be entirely relatable, but hear me out: There is an inherent definition of how evil a Western figure can become in the face of great wealth. There’s realistically no need for influence, as the religion Harry follows grants him great acclaim amongst his peers, yet there is such a dedication to gaining higher economic status to the point where his view of children is blurred into viewing them as no more than mere accessories to his great fortune. I have to admit that this is a horrifying narrative to explore in a deep sense in our current political climate.

It’s fictional, yet deeply steered into horror stories we are not too removed from.

I say all of this in the hope that you will see The Night of the Hunter, either as a revisit or a pleasant discovery. I won’t go on and on about its excellence because, honestly, you probably get the point that I really enjoy this film and think it’s an important piece of cinematic history. Nevertheless, you should be there on Monday, plopped in a seat, chomping on that sweet poppy corn, and going on the ride that is Harry Powell’s search for cash-a-roonie.