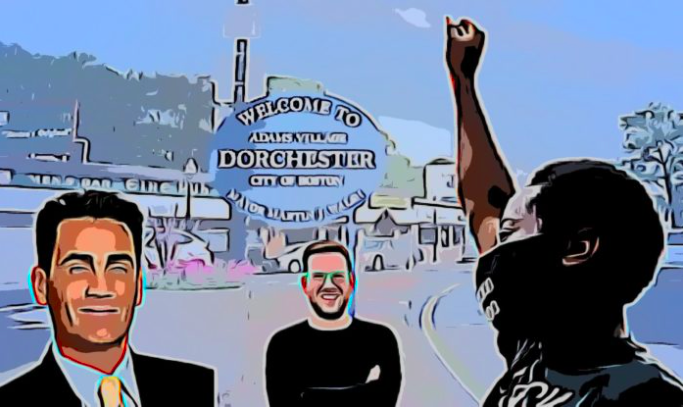 The most prominent feature of Boston’s District 3 race for City Council in 2021 might be how much of a nonrace it is. To understand why that’s significant, it helps to consider the demographics of this enormous swath of Boston.
Approximately 72,000 people make up District 3, which includes parts of Dorchester, South Boston, and Roxbury. While the district includes some of Boston’s historically Black neighborhoods, ethnic European and Asian immigrants also make up large portions of the community, whose voters overwhelmingly pulled for current City Councilor-at-Large Annissa Essaibi-George, a centrist Democrat who is supported by the cops, in the current mayoral race.

Meanwhile, at the district level, the incumbent is Frank Baker, a white, also cop-endorsed nonparty-affiliated Dorchester native known to be a conservative firebrand. Compared to the rest of the increasingly progressive council, Baker is right-of-center. Yet he has run unopposed from the Black, Latino, or Vietnamese communities since 2011, other than candidates who have garnered less than 1,000 votes. Baker ran completely unopposed in both 2017 and 2019.

Now, he could have his most serious opponent yet in newcomer Stephen McBride. Originally from Pennsylvania, he’s a white, openly gay, married Hubspot manager who is running on a climate and equity platform. McBride is contending, but so far, his campaign has lacked grassroots support and the financial backing crucial to capturing a district seat in Boston.

In the spring, announcements came from prominent community advocates who intended to run against Baker. Romilda Pereira, a District 3 resident, youth community worker, and founder of Project Turnaround, announced her intent to run. Pereira spoke about the lack of resources being focused in her neighborhood after the tragic shooting in April of Delois Brown, a 73-year-old who was sitting on her porch on Olney Street in Dorchester.

“I was in my community the day Ms. Brown passed away, and I was sitting on my aunt’s porch the following day. You had the interim mayor, you had everybody that is running, that are already in political seats, they are all out there making promises with photo-ops, and cameras,” Pereira said. “I made a comment, and I made it very loud and clear, It is funny how you all are out here now, but as soon as you go away, we will never see you again. Which is true. Go look at it now. No one is out there, no one came back to provide resources, nobody came to support our ongoing needs. That is when some young people said, Yeah, Romilda, that is why we need you in office.”

But running a district campaign in Boston is a pricey affair, especially for the already overextended. Pereira continued, “I signed up to put my name on the ballot, but then when I thought about the work that I would have to do and all the work I was doing, I didn’t have the capacity for that. I would have to leave people behind. I couldn’t sign up for that. It is something that could be in the near future, but right now one of the most important things to me is my community. I couldn’t leave them.”

Ashawn Dabney-Small, 18, was also poised to run against Baker on a campaign that was equity-based and overtly anti-Frank Baker.

“This incumbent has never been about action,” Dabney-Small told the Dig last November. “He’s always been about slow . He doesn’t know what he’s talking about and quite frankly … he’s taking his position for granted.”

But like Periera, when it came down to the work involved in running a campaign to unseat Baker, who at the time of this writing had close to $200,000 in his campaign account, Ashawn withdrew.

“I was spending personal money and I needed that for bills,” Ashawn said in August. “It just didn’t make sense to continue to go on and burden myself that way.”

The TOWNIE AND THE WONK

Frank Baker is notorious on the City Council and across Dorchester, the neighborhood he grew up in and where he still lives and owns property. Whether he’s cursing up a storm on Zoom meetings, jokingly threatening journalists over interviews (me), or going on record saying, “We need to take the cuffs off the police,” it is widely understood that Frank is Frank and will do what he pleases. He sees himself as a defender of the old guard and a block on the majority progressive council.

Baker has also been cast in the spotlight and criticized for his controversially centrist (read: conservative) positions, including a recent no vote on same-day voter registration. The councilor is in tune with real estate interests as well, and has been active in the building of major developments across the district.

Stephen McBride, meanwhile, was unknown in Boston politics until he announced his candidacy in February. Since then, his platform has garnered little attention and less money, slightly over $30,000 according to McBride as of August. He openly touts his experience at a tech company, and has earned the endorsements of several progressive groups including Sunrise Boston. While on the ground, McBride has made an effort to frequent community events like a Peace BBQ in Fields Corner last month.

“When people think of me and this campaign, what I hope is that they know that they are voting for an accessible and transparent leader,” McBride said. “Someone who is looking out for them, who is listening to their concerns, and putting them as people at the forefront of his policies.”

As for Baker, I asked the incumbent where we might find him at any particular upcoming events around the Dorchester community.

“Which ones, Chris?” he replied, as if I hadn’t just asked him that same question. His campaign didn’t follow up with any dates or happenings.