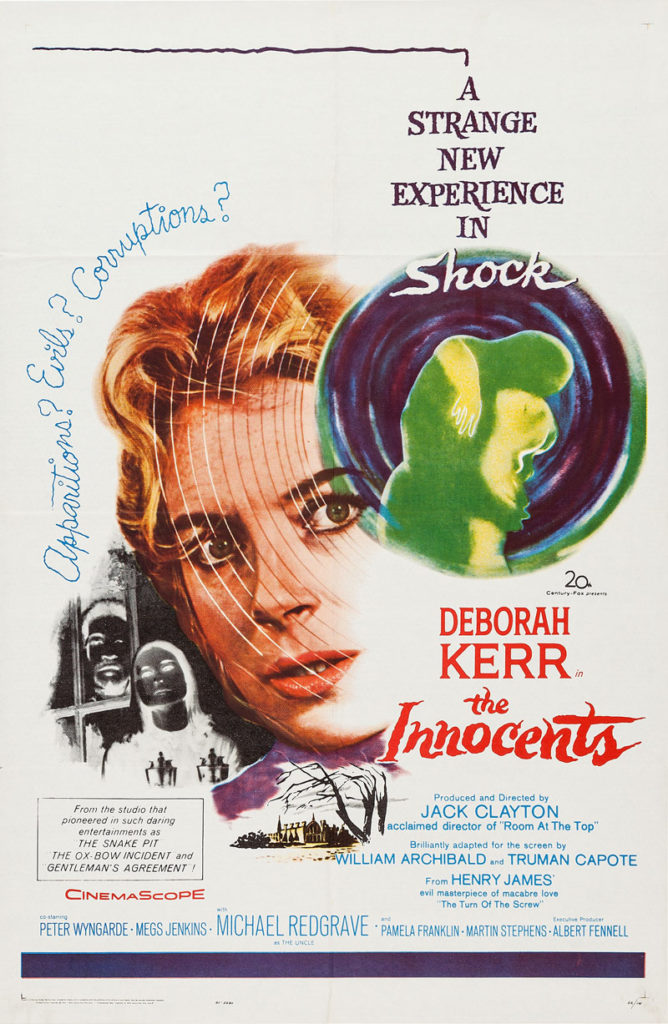 No one does ghost stories quite like the British. The locale obviously lends itself to spookery, with its centuries-old buildings, cramped quarters, and famously creepy forests. Indeed, the ghost story is as quintessentially British an artform as any, a tradition dating back centuries in fiction and (supposed) reality alike. Perhaps this is due to the Kingdom’s historically repressed sexuality, with phantoms serving as physical manifestations of long-buried secrets and desires. Or maybe it’s just because an English accent does a first-rate job of selling supernatural terror.

Regardless of the reason, one of the greatest cinematic British ghost stories is The Innocents, Jack Clayton’s 1961 adaptation of Henry James’ novella The Turning of the Screw. Deborah Kerr stars as Miss Giddens, a timid first-time governess charged with the care of two children by their uncle (a scene-stealing Michael Redgrave), who has inherited them from their parents and who can’t even pretend to be bothered with them. Upon her arrival at the palatial Bly estate, Miss Giddens is initially enchanted by her new home, as well as her charges Flora (Pamela Franklin) and Miles (Martin Stephens). As she settles in, however, she starts to notice that things are a little… off. For starters, there’s the mysterious recent deaths of the last governess and the valet, neither of whom anyone seems to want to talk about. Then there’s those kids: Flora is perpetually distant and elliptical, while Miles is unnervingly charismatic, acting less like an adorable child and more like a tiny, cynical adult. Oh, and there are also the mysterious spectral figures Miss Giddens keeps catching out of the corner of her eye, sometimes eerily in the distance, other times directly on the other side of a closed window. Is there a connection, or is Miss Giddens simply not quite tethered to reality?

At first blush, The Innocents feels like it could have been made twenty years earlier. Its ornate sets, mannered acting, and lush score of sweeping strings seem out of place in a horror landscape that’s already seen Psycho and Peeping Tom. Yet, just as nothing at Bly is quite as it seems (or is it?), so too does The Innocents spend most of its running time just a knock or two off-kilter. Cinematographer Freddie Francis, fresh off an Academy Award for Sons and Lovers, cycles through a remarkable bag of subtle tricks, from unusually harsh lighting and dizzying deep focus to slightly feathered edges during night scenes, making the film feel simultaneously spacious and claustrophobic. The sound design, too, has more in common with Delia Derbyshire’s work at the BBC Radiophonic Workshop than traditional Hollywood orthodoxy: note a particularly stunning dream sequence in the second act, where the sound effects devolve gradually into straight-up psychedelia.

The film’s classical aesthetic is also thrown into contrast by the surprisingly frank sexuality of the script. Credit here likely lies with co-writer Truman Capote, who took a break from the writing of In Cold Blood to punch up playwright William Archibald’s screenplay. Capote’s voice is clear in Redgrave’s character (who all but says “I don’t want to take care of these children because I like to have sex”), and in little Miles. Most creepy kids in cinema, from Damien Thorn to Charlie Graham, get mileage from silence, an ambiguous stare or an oblivious smile. In Capote’s hands, however, Miles is something else. He talks a lot, and while he never says anything explicitly sinister per se, he also makes it clear that he is absolutely not a normal child (even ignoring the school expulsion which he refuses to explain). Credit here should also go to the young, preternaturally articulate Martin Stephens, whose resume also includes another creepy-kid all-timer: 1960’s Village of the Damned.

The result of all of this is a curiously disorienting experience. Despite the ostensibly formal presentation (and the fact that many audiences have undoubtedly read the source material in junior high), all of these just-left-of-center elements add up to a film where you’re never quite sure what you’re watching, or how far it’s willing to go. By the time Miss Giddens deliriously tells the maid, “I want to save the children, not destroy them!” both she and the audience are in a state where both seem like plausible options. Like a spectre, a great ghost movie haunts your mind long after you’ve left the theater. Prepare to keep a candelabra on your nightstand, just in case.