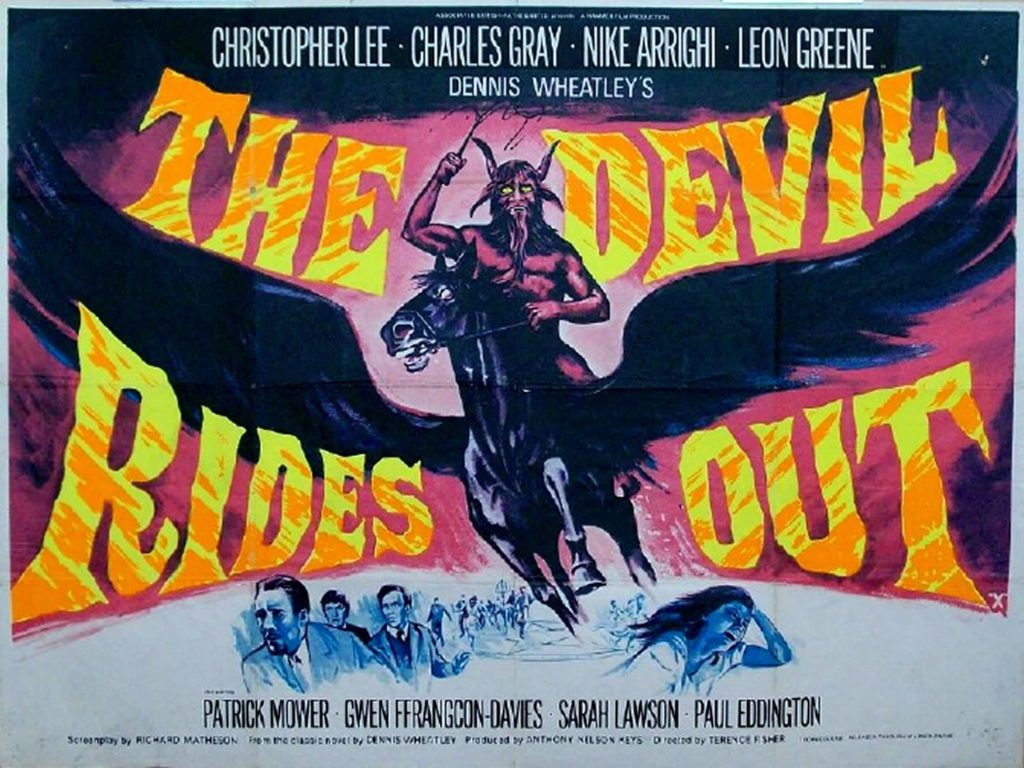 Good old Satan. You can talk about your Wayne Newtons or your Jerry Lewises, but has anyone contributed as much to popular culture, or for as long, as the Great Horned One? The shadow of the beast looms large over a great deal of the better works of our time, from fine art and music to film, television, radio, and ham. Some of our most beloved artists cite Lucifer as an influence, and still more have been doggedly associated with Him. And while Old Scratch’s recent forays into politics have been perhaps ill-advised, it is a testament to Beelzebub’s legacy that He still finds ways to surprise.

I kid (well, half-kid), but few religious or folkloric figures have transitioned as smoothly or directly into the pop lexicon as the Devil. The reasons for this are myriad; to be sure, Satan represents the ultimate rebellion against the ultimate authority, and as such will forever remain punk as fuck. But I would argue that the lure of brimstone lies in the aesthetic as much as the ideological. Pentagrams, chalices, black silk-lined robes, big hairy goats– these things just look cool. And while much of this iconography dates back at least the middle ages, its role in contemporary culture is thanks in large part to a man named Dennis Wheatley. 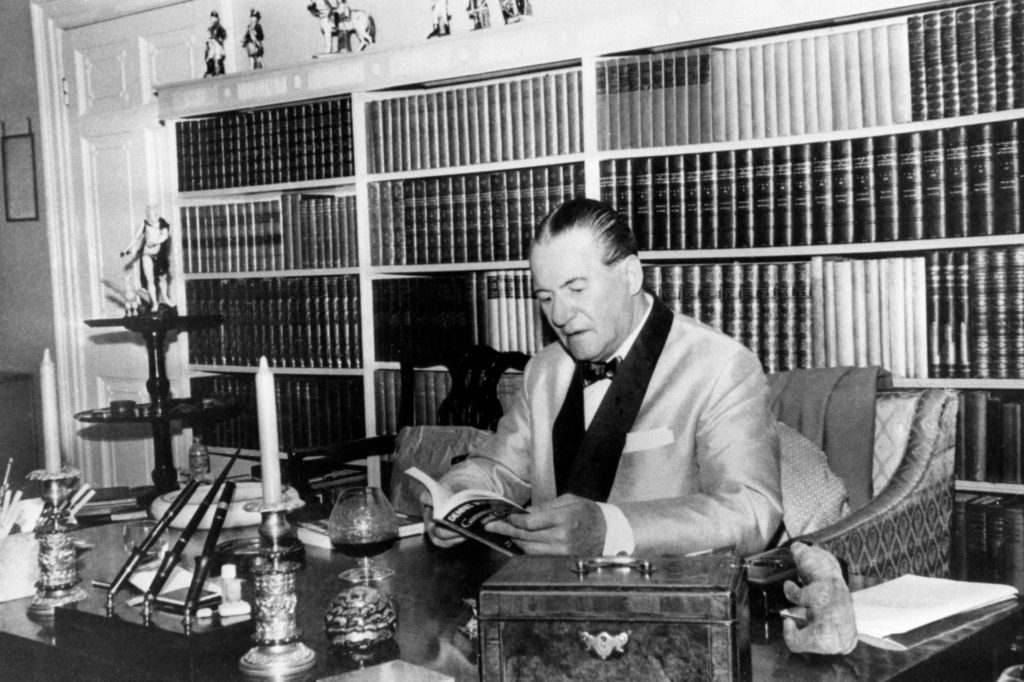 Though little-remembered stateside (at least in non-esoteric circles) Dennis Wheatley was one of the most prolific and successful British adventure authors of the twentieth century. While his novels ran the pulp gamut from war yarns to spy thrillers, he found greatest success in tales of terror, and specifically in Satanism and witchcraft. Wheatley did not condone black magic, but he gave it enough credence to become known as an expert on the subject, and his research brought him to make the acquaintance of such notorious figures as Montague Summers, Rollo Ahmed, and the Great Beast himself, Aleister Crowley.

It is this last figure who inspired the villain in Wheatley’s best-known work, The Devil Rides Out. The story is pretty much pulp by the numbers: an aging French adventurer and a young American dynamo foil a nefarious scheme and rescue those in distress. Where The Devil shines, however, is in the details: the story is jam-packed with orgies, baphomets, and weird rites, with chapter-long tangents devoted to astrology and numerology. At the heart of it all is Mocata, the sinister cult leader behind the diabolical goings-on (who, like the similarly Crowleyan antagonist of Somerset Maugham’s The Magician, is constantly and hilariously cited for his disgusting girth). 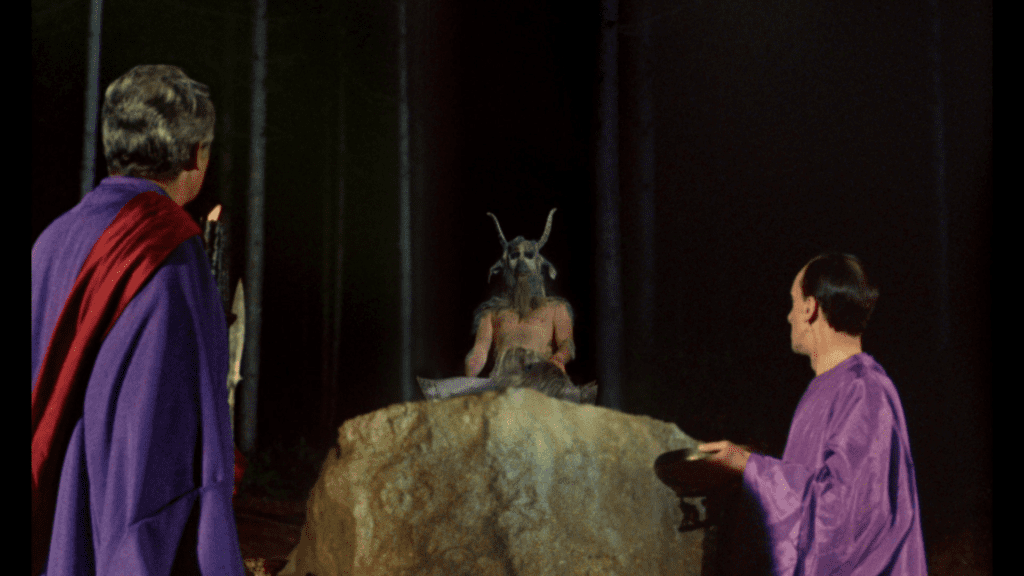 It is no surprise that Wheatley’s work would inspire another of Britain’s most renowned names in horror: Hammer Films. Having already tackled such horror icons as Dracula, Frankenstein, and Rasputin, Hammer turned their attention to Wheatley with a 1968 adaptation of The Devil Rides Out. The plot is simplified from the book, but is more than made up for with the visuals. Hammer’s film is packed wall to wall with lush, technicolor devil-worship, awesomely dated special effects, and perhaps the greatest practical-effect Baphomet ever committed to film. As always, Hammer’s casting is on point, with go-to leading man Sir Christopher Lee in a rare heroic role as Duke de Richleau and erstwhile-Blofeld Charles Gray as the evil Mocata. And, seriously, did I mention that baphomet? Oh my god, I love that thing.

As part of the Brattle’s continuing series Dead of Winter: Cinema of the Occult, The Devil Rides Out is tonight accompanied by an introduction by one of the series’ guest programmers. As author of Season of the Witch: How the Occult Saved Rock and Roll, Peter Bebergal is uniquely qualified to discuss the influence of Wheatley’s lurid fiction and Hammer’s gothic stateliness on pop culture as a whole. As if that weren’t enough, it’s followed by an even wilder take on Mephistophelean excess: Ken Russell’s infamous The Devils. We’ve lost a lot of pop icons in the past year, but for better or for worse, Satan will be entertaining us for years to come.

Part of the ongoing series: Dead of Winter: Cinema of the Occult