“But Doctor, I’m not ill. My illness is seeing too clearly.”

A career-long penchant for religious and philosophical themes took an ornery turn in Robert Bresson’s final films, culminating (if not quite concluding) in 1977’s Le Diable Probablement (The Devil, Probably), screening tonight, with curatorial precision, as part of the Harvard Film Archive’s Furious and Furiouser retrospective of angry Seventies cinema. But it’s a very different kind of anger on display here than in the other films in the series, equal parts lament and laceration. An excoriating examination of — and, arguably, capitulation to — the siren call of secular nihilism among young Parisians in the post-May malaise, The Devil, Probably is also a cry of despair issued from within a polluted cloud of unknowing.

A kind of sad yet sensual downer glamour pervades among the would-be revolutionary hangers-on we meet as the film begins, everybody looking like they’ve been biding their time since 1968 in ever-shabbier exile from straight society, their hair long and greasy, denim fraying, shoes disintegrating. Indeed, the film’s opening scene involves one such pilgrim instructing others on how to read a person’s gait by studying her soles: this fellow leans clearly to the left, this one to the right, and so on. Bresson often shoots his characters from the waist down, calling attention to the way our natures precede ourselves, animal or otherwise.

In a montage of newspaper headlines, the film immediately poses its first question: murder or suicide? The initial context for the question is the death of a student intellectual, but it soon expands to encompass other assassinations: of the Earth through environmental degradation; of beauty (and its running mates, the true and the good) through relentless commodification; of God, if you like, through the machinations of… well, Bresson seems to have a suspect in mind.

In the moment before he is shot and killed while strolling through Pere Lachaise cemetery, by the junkie friend he’s deputized for the task, Charles (Antoine Monnier) — a brilliant but terminally jaded math tutor, determined to quit the fallen world — admits that he’d expected, on the verge of extinction, to think “sublime thoughts.” “Shall I tell you?” he begins … but he shan’t, he’s shot, and his executioner quickly scoops his promised money from Charles’ pockets and runs off into the night.

You might think to yourself: hell, the devil’s a damned easy target. The ultimate, even the quintessential scapegoat, he offers a lazy way out of the moral maze. But consider this: unlike the immigrant, the Jew, the communist, or the infidel, no man can find the devil. We are often eager and ever-able, thanks to the gift of imagination combined with the curse of paranoia, to project him onto proxies of myriad varieties, but the dark prince himself — the demon on our shoulder, the monkey on our back — eludes capture. Should we credit a failure of definition or one of recognition? What is the root of all evil? What is the coin of the realm?

In L’Argent (Money, 1983), the dyspeptic visionary’s final film, Robert Bresson serves as our acerbic escort and tour-guide, working freely from a map provided by Tolstoy, on a journey from the devil to the deep, cheap aisles of plenty, nailing as he goes both the particularly pinched nexus of easy cash and awol ethics of Europe’s recessionary early ’80s and the more enduring insidiousness of our implacably transactional nature.

The story, told with Bresson’s usual cool parsimony of incident, dialogue, and affect, concerns a handful of minor commercial transactions through which three counterfeit 500 franc bills pass from a couple of rich kids making mischief to an unscrupulous shop owner, finally landing in the pockets of an oblivious laborer, who gets caught using them — and loses his life to the legal consequences.

“Ou est l’argent?!” cries Yvon at the end of the film, which also marks the end of Yvon’s own journey from indifferent, consumerist complacency — just about the closest thing to “innocence” on offer here — to savagely violent criminality. But no matter, no man can find the money; idle hands will all, or nearly all, be recruited by the trompe le monde.

Money, meanwhile, bides its time; and the devil always collects his due.

Robert Bresson might be classified as a Satanist in the following sense: he believed that Satan is. Or at least that he may as well be. The Devil, Probably, the director’s penultimate film, can be, and often is, considered in the context of the long, demoralizing aftermath of May ‘68’s near-thing, never-was revolutionary transformation of France. While this is a perfectly appropriate way to approach the film — it’s how I remember thinking about it when I first saw it at the Anthology Film Archive twenty years ago — it only takes us so far. To get further we need to view it as a development upon — and perhaps the endpoint for — the religious themes explored throughout Bresson’s oeuvre. 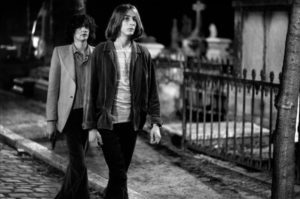 “The cruelty of the world was peaceful. The murder was deep. And death was not what we thought.”

So Clarice Lispector tells us in her 1960 short story, “Love,” recently made available in English as part of the mammoth new Complete Stories published by New Directions. Her description of the world, with a slight adjustment for increasing noise levels, remains as apt as ever; which is to say, perhaps not apt at all. You may, of course, choose to reject it as false, nihilistic, and counter with the assertion that nature (including human nature) is essentially neutral, even benevolent, and that murder is an artifact of culture.

You are welcome to the prettiness of thinking so. One imagines, though, that Robert Bresson would have somehow signalled his assent had Lispector’s proposition been put to him. He did so anyway, indirectly, through his films, in which the world is too much with us, and we, in our frantic, fuddled efforts to comprehend and compensate for it, have, over the course of several millennia, assumed sufficient knowledge and power to overwhelm the world in turn. As we appear to be well on our way to doing. What in the world is compelling us to do so? And if death is not what we think, what is it?

Crash-laughing through empty coke bottles (acrid echoes of Godard) on his way to bed with Alberte, one of the two women he can’t quite decide between, and who can’t quite decide about him, Charles is a kind of anti-Joan of Arc, a living (and dying) embodiment of the faith of the faithless: a shrugging saint in negative. Bresson’s Trojan horse theism operates according to the via negativa, its traces indiscernible except in the relief-pattern left by their disappearance. When one addled activist proposes that the revolution now requires the vanguard to “accelerate the process of disintegration already begun through books, drugs and films,” it somehow translates into strafing churches with flyers featuring nude photos on one side and “God is a traitor” on the other. Could God be a suicide? Or is there, after all, no limit to doing nothing?