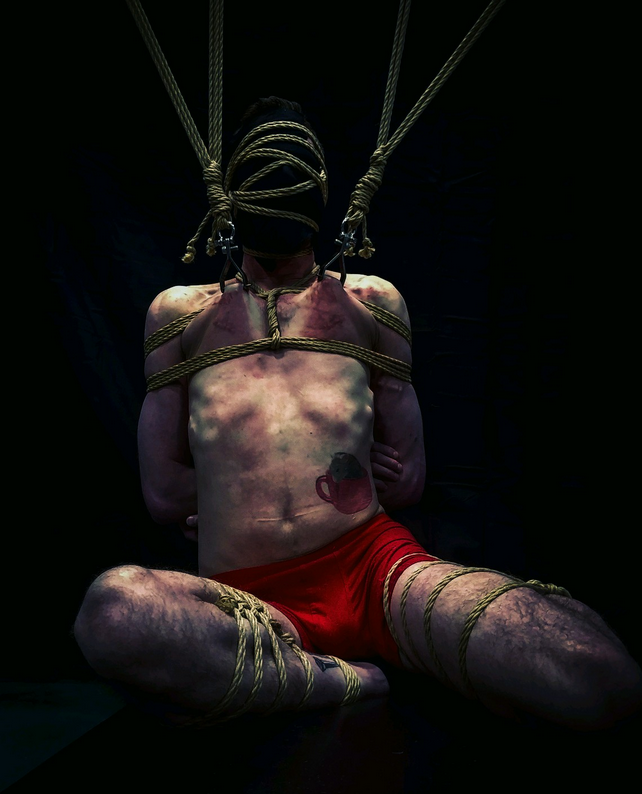 When YouTube recommended me the documentary, ​Dances Sacred And Profane​, astonishment hoisted my curiosity about body suspension into an altogether different plane as I wondered, disjointed by an unexpected reflex, if I could stand having thick hooks sewn through my flesh in order to dangle, suspended in mid-air.

Witnessing the solemn native American ritual often referred to by the Mandan name Okipa (performed in the film by the body modification enthusiast of wide repute known as Fakir Musafar and old-hat piercer and jewelry designer Jim Ward) roped me into something far loftier than I had anticipated. I was awestruck by the beautiful pageantry, by a deep respect for the performers, and by intrigue about the pragmatics rigging the subculture together. 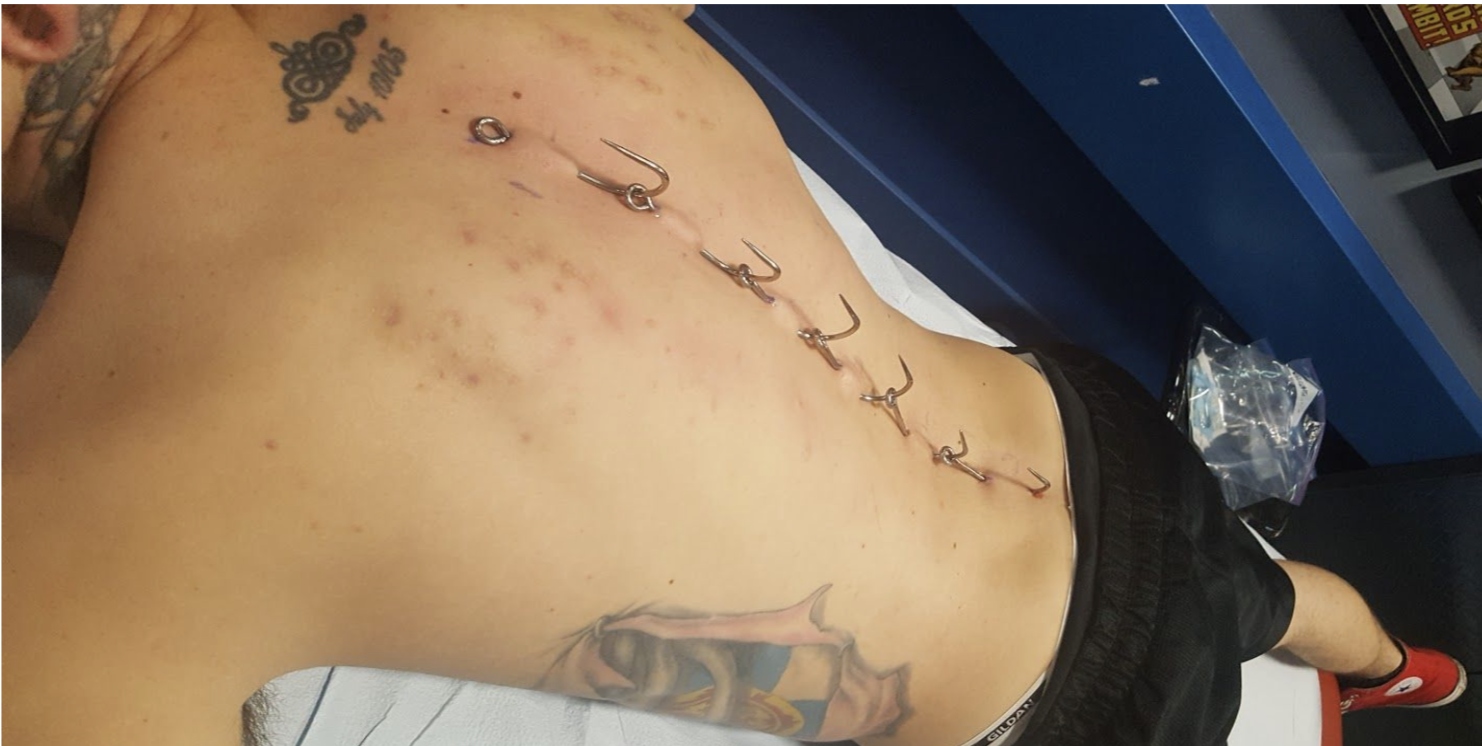 Immediately I knew that I would never be capable of the Okipa ritual myself — and that I also had to learn more about all aspects of the modern practice known as body suspension.

I tried to locate somebody in the Boston area who would be able to tell me more about the practice that so fascinated me. Unfortunately, expert knowledge on body suspension is not easy to come by. Of eleven licensed piercers listed on the webpages of the 7 body art studios in Boston, only one bio professed the piercer to have an interest in body suspension. (However, one piercer mentioned in their bio an interest in more extreme body arts…) Since neither could be reached for comment, my search for information moved to the public Facebook group ‘Body Suspensions.’ After inquiring as to whether anybody in Boston or New England performs suspensions, two group members mentioned a team based in New York City as the nearest hookup.

I managed to get in touch with international suspension practitioner Doug Smode. Smode is a founding member of the Permafrost Suspension Crew in Calgary, Alberta. He is also an accomplished body modification artist with more than ten years of experience. I was shocked when he agreed to set aside some scant free time during a busy day to talk with me about the ins and outs of body suspension.

During our conversation I learned that modern body suspension’s resemblance to the ritual thematized in ​Dance Sacred and Profane​ is no more than skin deep. Modern body suspension is more inspired by, and its techniques derived from, the ritual of Okipa. Smode was careful to stress the immensely sacred nature of the Native American and First Nations ceremonial practices. The suspension rituals specific to each tradition, all vastly different from modern body suspension, are sometimes referred to in a sweeping fashion as the Sun Dance.

The chief difference is that, de-ritualized and defined as modern body suspension, the experience requires only an unmistakable transfer of weight. The Native American and First Nations rituals that incorporate suspension involve multifaceted ceremonies of initiation, of which body suspension is one part in a series of tests. By modern standards, the only technicality is that your feet must leave the ground. Some people have accomplished this and come right back to Earth, some have soared for fifteen minutes, and some performers hang out for even longer periods. Everything about modern body suspension, from the positions of the piercings to the sensations, to the inspiration to endure the ordeal, is individualized.​ As Doug put it, “Everyone has a different reason to step up to the plate for the first time.” When I asked Smode if body suspension should be considered a performance art, a sport, a therapy, or something else entirely, he said: “All of the above. Body suspension can be all kinds of things in terms of physical experience.” This subjectivity applies to interpretation of the practice as well. The broad scope of modern body suspension’s aesthetic value strikes everybody differently, so whether the sensations are vicarious or intimate, they’re taken on like one’s own body mass. When I asked if body suspension is for anybody, Smode replied that it was for anybody who wants to try it. He said, “People from all walks of life are attracted to this kinda stuff. And they have all those different reasons for why they want to approach it.” 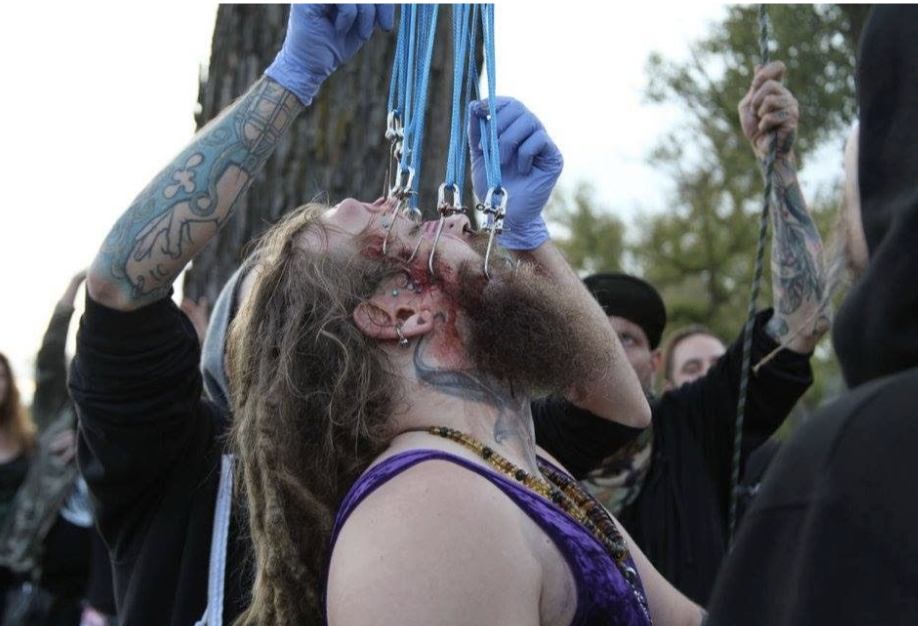 “To become a [body] piercer, it takes extensive study,” Smode told me. Do not even consider trying this at home. Over and above the difficulty of piercing with the intent to adorn, the challenge of placing in the skin hooks that will bear the body’s weight requires fluency in human anatomy and the body’s healing responses. “With body suspension, the goals are functional,” he added. Smode classified piercings for suspension as body modifications, adding, “Altering the surface of the skin ​with intent​ is body modification.”

Safely executing a body suspension typically requires the work of multiple people possessing skills that generally fall into three categories. In Smode’s own words, these are “piercing, rigging, and bio.” Piercing refers to the proper placement of hooks to achieve the desired suspension position, as well as for optimum healing afterwards. The ‘rigger’ is a person in a suspension crew who is adept at designing the systems of ropes and counterweights that lift people. ‘Bio’ encompasses sterilization and hygiene practices as well as piercing aftercare. Some individuals acquire mastery in all three domains, but the expertises do not necessarily overlap. Typically, like-minded people interested in body suspension form “suspension crews.” But not all suspension crews are geographically local to one another. According to Smode’s recollection, the scene proliferated via the Internet starting in 2006. “[It’s] like any international practice or sport, a worldwide network of people who you can meet and keep in touch with. You can get together and collaborate with people… The internet connected everybody.” 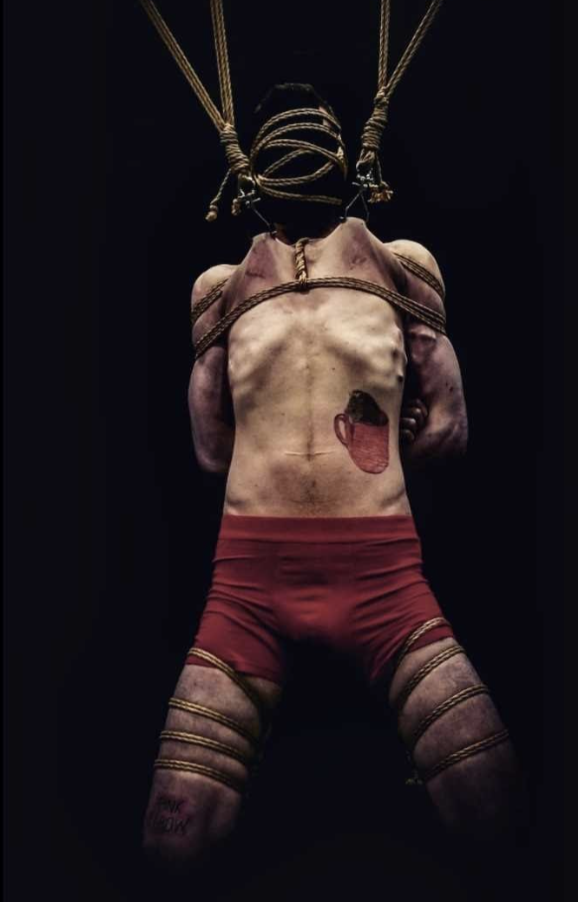 Even veterans who had been performing body suspension long before its first blossoming as a subculture in the early 1990s. Smode mentioned casually that he’d met​ the esteemed Fakir Musafar a couple of times. “[Musafar] was a beautiful human,” he recalled. “No words can describe the man.” Similar appellations hang on Mr. Smode as well. As I was perusing the Facebook group ‘’Body Suspensions’, I noticed a comment mentioning Doug Smode as “the best hominid.”

Cypriot-Australian performance artist Stelarc is another suspension guru Smode told me about. Stelarc’s pieces reflect their performer’s post-human ideology, succinctly summarized as, the body is obsolete.  Smode’s ultimate take on suspension is similarly thought-provoking, but comes with a livelier hook. When I asked him what he would say to a wide-eyed kid who really wants to experience suspension, he said, “I’d answer with a Hellraiser ​quote: ‘We have such sights to show you.’”