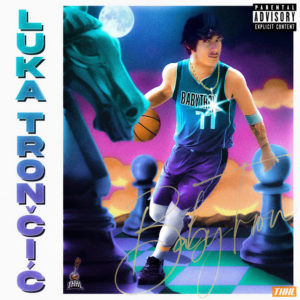 The congenial relationship between basketball and rap has been well-documented in the past. Ever since the New York Knicks shoutout in “Rapper’s Delight,” the two forms of art have seemingly been impossible to separate, with countless NBA players trying their hand with the mic and many more rappers executing punchlines about players, basketball rules, historical cornerstones, and whatever else that may come to mind.

This conjoined lineage is still chugging along in 2022, mainly thanks to the current Michigan rap scene and the simple fact that the NBA is arguably more exciting and flavorful than it’s ever been. From GlockBoyz TeeJaee’s regional classic “Wack Jumper,” to Miles Bridges dabbling with Flint’s shit-talking scene (Flint is also his hometown), to Veeze’s uproarious Tony Snell reference, Michigan rap and the NBA are simultaneously growing in visibility and rapport.

Very few rappers from Michigan, however, generate more references to the NBA in his lyrics than BabyTron, the rapid-fire rabble-rouser from Detroit. Ever since he gained traction rapping over 80s freestyle dance beats with fellow NBA fans and punchline savants StanWill and Trdee as part of their Shittyboyz collective, BabyTron’s love for the game has only grown more apparent; especially as his solo career continues to blossom thanks to caption-ready bars and nostalgia-driven sound effects fit for the age of Tik Tok.

For those who aren’t familiar with BabyTron, the dude can surely rap. In fact, that’s all he does. There’s no melody, no bridges, barely any hooks and no serious forays into the mainstream. There’s just relentless punch-ins over quirky beats featuring James Bond and Harry Potter samples, curb-stomping drums courtesy of ENRGY, aforementioned 80s dance rhythms, and whatever other weird shit or tempo an in-house producer may throw his way. His words hopscotch across the landscape like a James Harden euro-step. It’s almost as if he’s racing the beat, sometimes.

But as an avid NBA fan like myself, what amuses me the most is Tron’s crate-digging knowledge of certain factoids from the sport, and how he effortlessly contextualizes these factoids through irrepressible punchline wizardry.

So, with the NBA playoffs essentially upon us, let’s have a little fun and look at some of Babytron’s best mentions of the NBA. I’ll probably fuck around and do an entire Shittyboyz-NBA post at some point afterwards.

“Went in with a Curry, left with a Damian” from “Dead Man Walking”

“I’ma call you ‘Dennis Schröeder,’ you done sold the bag” from “Night on Collins Ave”

Dennis Schröeder is an okay role player. He played as a backup point guard on the Atlanta Hawks for a number of years in the earlier part of the 2010s, and then turned into a journeyman. He’s an okay spark off the bench, but when his role was increased in the 2020-21 season with the Los Angeles Lakers, his deficiencies became apparent, particularly in those playoffs, where he became the second go-to guy after superstar Anthony Davis was injured. The Lakers lost three straight to the Phoenix Suns in the first round, and Schröeder shot a combined 6-23 in the final two games, which amounts to 26 % from the field. Not good.

Anyway, Schröeder’s contract was up after that season, which meant he was shopping around for a new one. He asked the Lakers for $100-$120 million, which was nowhere near his value, especially after an under-performing playoff. Long story short, he tried swindling the Lakers, which is what BabyTron was most likely referring too in this lyric. The Celtics would end up signing him for one year and $5.9 million before trading him to the Rockets-probably due to porous defense (Celtics were 23rd in the league on defense at one point). He is now back as a bench player on a bottom five team, and the Celtics hovered around the one-seed for a while. Yikes.

“Encore coach, LeTron James, I do more than play” from “”Supervillain”

BabyTron has said in a past interview that LeBron James is currently his favorite player in the NBA. Now, LeBron is obviously one of the GOATs in NBA history, which means many rappers have used his name in their bars. Few have encapsulated The King’s legacy better than BabyTron does in this line. Sure, LeBron is a four-time champion and only player in history with 30k points, 10k rebounds, and 10k assists (among other insane accomplishments), but he also sometimes acts as the unofficial coach and general manager of a team because he has that much power. As we’ve seen this year with the abysmal Russell Westbrook experiment, he doesn’t always make the most logical suggestions, but he does have four titles. He’s done well for himself.

As we’ve seen during his tenure with the Heat, Cavaliers, and Lakers, general managers do seem to build a team to his liking, even if his front office advice sometimes sucks. BabyTron seems to hypothesize this theory, as well.

Side note: This is not the first time BabyTron has used an NBA player’s name in his own. He’s released one album named Luka Troncic and another one named Sleeve Nash. He’s also claimed that people think he looks like point guard Ricky Rubio. You be the judge.

This 2019 Shittyboyz track is loaded with NBA references, including one where Tron mentions Allen Iverson’s infamous game winning crossover and shot over current head coach Ty Lue in Game 1 of the 2001 NBA Finals.

The Fox reference, however, is much more intriguing. For those unaware, Tron came up in an era of Detroit rap called “scam rap,” along with guys like Kasher Quon and Teejayx6. He regularly calls himself the “Bin Reaper” and appears fully-fledged in this culture based on his raps. Fox is a solid point guard (though overpaid for a guy who is undersized and can’t shoot) on the lowly Sacramento Kings. Despite some flaws, he’s one of the few bright spots on a bottom five team.

I believe Tron was only referencing the fact that Fox plays for the Kings in this lyric, especially since the track came out in 2019. However, it’s wild that Fox apparently launched a project called “swipathefox” (in reference to his nickname) in December of 2021, which promised giveaways, exclusive chats, gaming opportunities, and more for those who purchased these NFTs, according to multiple reports. The official website, however, went offline after Fox pulled the plug due to an ill-timed launch. The problem with the project’s discontinuation was people had already bought $1.5 million in NFTs prior to Fox pulling the plug. Maybe now that the Kings are out of the playoffs, he can re-establish it.

On a lighter note, the swipathefox nickname is in reference to his stout defense during his younger years. What a weird coincidence, and what a fire bar.

Out of all of the worst teams in the NBA, the Detroit Pistons are probably the most fun to watch, mainly thanks to the recent number one overall pick in the draft, Cade Cunningham. The Pistons’ rookie has a shot at rookie-of-the-year thanks to a season where he’s putting up 17 points a game and shooting an efficient 47 percent from the field. He also pulled out a pair of Cartier Buffs during his draft party, which is what Tron references here.

All in all, it seems like the Pistons are embracing the Detroit rap scene and style. They’ve allowed underground heroes like Veeze, Icewear Vezzo and Babyface Ray to perform during games, and also have the “ice cam” for their jumbotron. Rap and basketball culture continue to intertwine.