Coolidge Corner is putting on its 19th annual Halloween Horror Marathon—thickly packed with the best picks in Halloween horror. If it doesn’t get you into the Halloween spirit, nothing will. Don’t miss out on these and five more films (which will be announced as they play) for twelve straight hours, all on 35mm film. The event attracts hundreds of horror fans from all across New England to see the ghost stories projected on the screen, and it’s an entire experience. Additionally, there will be a Coolidge costume contest, a paranormal presentation by Ron Kolek and the New England Ghost Project and the theater will be playing trailers from the Coolidge Crypt. You won’t get this anywhere else. 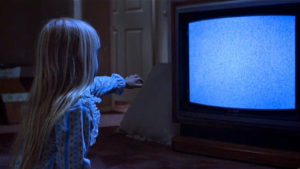 The Freeling family moves into Orange County, California, to a sprawling, sunny new community. Steven and his wife, Diane, begin to get comfortable in their new home with their children, Dana, Carol Anne and Robbie⁠—that is, until Carol Anne begins mysteriously speaking to the television set.

When an earthquake shakes the home, a ghost hand strikes out of the television, a tree attacks Robbie and Carol Anne is sucked into a ghostly portal, the Freeling family know that their new home isn’t as sunny as it appears. They hear Carol Anne’s ghoulish voice pleading from what they believe to be the television. Steven learns that these hauntings⁠—”poltergeists,” the parapsychologists the family brings in, calls them⁠—are being caused by the fact that the home was built on an ancient burial ground. Terrified, the family brings in an eccentric medium to help, desperate to bring Carol Anne back from beyond.

Poltergeist is a horror classic, perfectly concocted from the brilliant minds of Steven Spielberg (who wrote and produced) and Tobe Hooper (who directed). The film has a perfect infusion of both Spielberg’s 1980s E.T. –esque charm (the California suburbs, the family) and Tobe Hooper’s horror (faces falling off into clumps in the sink, skeletons dragging Diane into the depths of the muddy swimming pool). It’s a brilliant film and landmark in horror—certainly not one to miss while playing on the big screen. 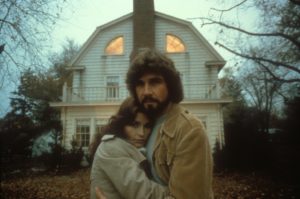 On a blustery, cold October day, the Lutz couple—George, the bearded and mumbling husband, and Kathy, the soft-spoken and positive wife—view a house for sale. It’s in Amityville, New York. It’s got everything: waterfront views, a boathouse, large square footage and a beautiful yard for the dog and kids. The only setback: it was the sight of a mass murder a year earlier in 1973, where Ronald DeFeo shot his parents and siblings. This doesn’t seem to shake the Lutz family much, as they agree to purchase the home and move in with their three young children. Kathy asks Father Deleaney, their priest, to bless the home due to its bloody history, and he tries to oblige. I say “tries,” because the poor priest is attacked upstairs, flies swarming his face and a disembodied voice screaming at him to “get out!”

Soon, similar horrific events occur: Kathy’s aunt, a nun, becomes physically sick and must leave the moment she steps foot in the house. George begins to act violent and irritable. The Lutz’s daughter, Amy, has a malevolent imaginary friend which locks her babysitter in the closet for hours. The walls bleed and Father Delaney can’t get in contact with the Lutz couple because he is constantly being harmed by the evil forces that haunt their home from afar. As things begin to pile up, the Lutz couple realize their mistake—the house is haunted by something truly evil, and they need to escape before George goes insane or the house collapses in on itself.

Amityville is based on George and Kathy Lutz’s true story and book that details the hauntings that they experienced at 112 Ocean Avenue in Amityville. It’s a horror classic that earns its place in the golden years of 1970s horror (among other favorites of mine—that I highly suggest if you haven’t seen them—are The Exorcist, Don’t Look Now, The Texas Chainsaw Massacre and The Omen). It has that gritty, eerie atmospheric vibe to the cinematography that chills you to the bone. This film is the perfect watch for a chilly October night.