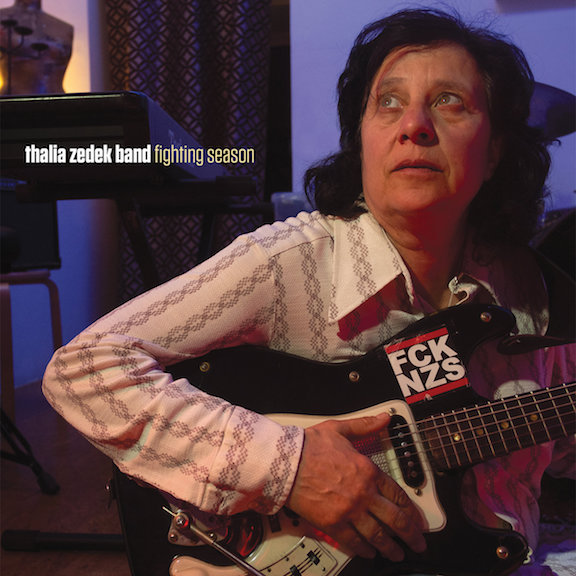 “Fighting Season” is the new psychedelic folk-rock album by Thalia Zedek Band. It was a pleasure to get an advance listen of this homegrown Boston legend’s new masterpiece off label Thrill Jockey Records.

Throughout the nine tracks Thalia croons with the melancholy wisdom of a reluctant prophet tapping our shared inner thoughts. The record stands in a palette of stripped earthy rhythm and saccharin whispers of viola, silky sharp piano, the occasional cello, all with the penchant to turn declarative and eerie at the call of the bandleader’s next line. The dirty jangle of Thalia’s chordal guitars bite and roll atop the saddle of the grungy yet nimble bass of Winston Braman. The combination of instruments always play to the story written by Thalia. No doubt the recording sessions at Kimchee Records in Cambridge with Andy Hong at the board were a creative joy for the whole team.

The sonic calm of Thalia’s matter-of-fact delivery haunt every line on “Fighting Season.” The title track is no exception with its soft/loud tension and release mimicking the narrative about inner struggle to seek purpose in an infinitely customizable world of warm isolation. Thalia declares she has a reason to fight as the outro releases our emotion and the search for reason finds a empathic voice in the cries Jonah Sack’s cello.

And that’s the true beauty of this record. The songs dive into the internal world of our existential battles to challenge how we perceive while simultaneously putting the headlights on the external shared reality. We see the house of crumbling cards in the headlines every day. Fear has infiltrated the consciousness and “Fighting Season” is here to tell us it’s time for our seekers’ eyes to flower in the darkness of the present day.

A notable moment happens as early as the first track when the moaning guitar lead by J. Mascis (of Dinosaur Jr.) in “Bend Again” serves up a perfect answer to the call of Thalia’s smoky alto telling us to stand our ground against the ego, the exploiters of our times, the abusers of power.

Daring to bring positivity into the river of easy cynicism of our world Thalia shines light in “Ladder.” The band calls out to each rung with a steady triumphant march. With headphones on the depth of the arrangement blossoms. Beautiful dissonance carries the song like a dark cloud weaving the sky guided by the band’s reactions in the moment, feeling each turn of the story. Mel Lederman lays down a flurry on the keys here serving a summation of the song’s title. The climax brings out a true rock n’ roll elephant-like tom tom break down by Jonathan Ulman while Thalia’s Boston roots take center stage: “One, if by land/Two, if by sea/Will, we repeat/Are/Our we, history.”

In “War Not Won” Thalia delivers a powerful first verse: “I know, I know the war’s not won/The door awaits your shadow’s grace/I know, I know, the lying cup/Will break to shards and slice my tongue.” The visceral imagery here brings to mind the famous Tom Waits quote: “I love beautiful melodies telling me terrible things.” The heaviness of her lyricism doesn’t let up and if you’re tuned in you’ll come away with thoughts stirring.

The band picks up the tempo in “The Lines” as Thalia’s guitar arpeggiates a rolling epic. We get more guitar leads peaking through the emotion of a torn narrator struggling to reconcile friends turned enemies and the time passed allowing finally for reflection.

The stripped down “We Will Roll,” features the crying viola of David Michael Curry and the cello of Jonah Sacks and breaks the listener’s heart against talking lines like, “Brick by brick/it was built/when it breaks/blood will spill.” Here Thalia taps into our human experience in a quest to heal or at least come to understand the grey reality of loss.

The narrative of the final track “The Tower” spits on the emptiness of current media and the culture of keyboard warriors. The band slams it home, erupting out of the pensive intro like a sun giving blood red light to a barren desert.

Thalia Zedek Band’s efforts on this new album have a poignancy and brutal honesty that need absorbing. It is a call to the real. A cohesive and confident sizing up of the everyday lies of our times. Go see Thalia and her band bring the spirit and substance of “Fighting Season” to the stage of the Midway Cafe on September 21st.

An interview with Hell Bent

Hell Bent are a thrash/crossover/D-beat/metal band out of Rhode Island. They are a perfect mixture of speed and anger needed in today’s…