Frank Hurricane is a psychedelic drifter somewhat based in Athens, GA. He specializes in folk and blues, and holds a storied discography full of tales from Appalachia and the soul. Most recently, he released, Life is Spiritual, with a newly formed band, Hurricanes of Love. Boston Hassle was chill enough to book a slot on the Life is Spiritual Tour, Wednesday July 17th.

Before this week’s show, I got a chance to ask Frank a few Questions about the driving forces behind his music. And also about shrymp folk.

Make sure to check the show out this Wednesday, where we’ll also have Goddess Complex (Athens, GA), as well as local noisers in Sweet Petunia, Healers Co, and Moe. The lineup is stacked and the park is ready, sundown till late.

Boston Hassle: You’ve been at it for a bit, with 15 releases on your bandcamp and a ton of tours, both US and international. Plus, Life is Spiritual is all about The Journey. What’s one (or more) of your favorite tales you have from your travels?

Frank Hurricane: It’s hard to pick a favorite story from my travels but we did get run into by a truck, saw a naked old man in downtown Richmond yesterday, and took a spiritual dump in the James River!

BH: On that note, can you tell us a little more about the Appalachian trek that inspired this most recent album? How long were you on the road?

FH: My last hike was 300 miles, it ended a few weeks ago! The holy mountains are one of my biggest influences and long hikes keep me going!

BH: This might expose my lameness, but can you explain what makes folk shrymp folk?

FH: Shrymp folk is music that promotes the message of the SHRYMPANATI, which is like a positive illuminati.

BH: What’s next? Do you have some more recording planned or is it time to hit the road again?

FH: I’m on a two month tour right now! And then I’m going to record the next record, it’s gonna be a full band album with my new band in Athens GA! 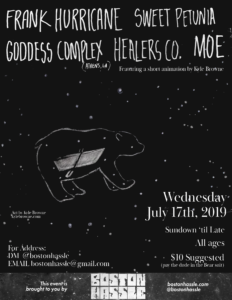