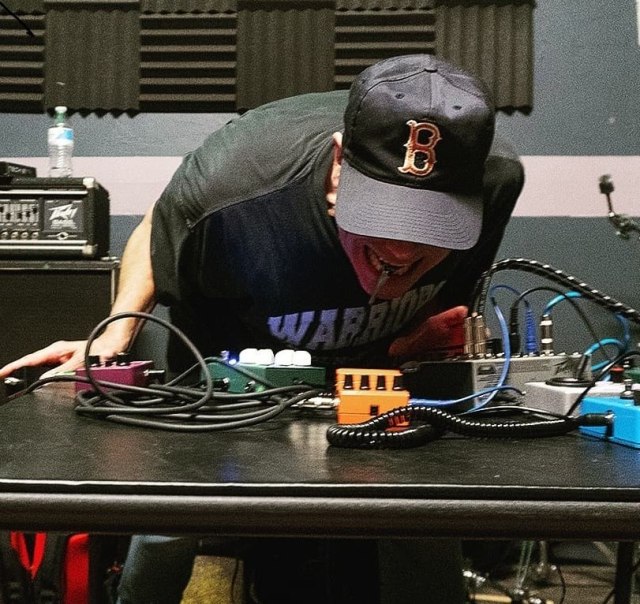 Dan Shea:
Hey Steve! So, I’m a fan of your 80s band Expando Brain. What was the community/scene or whatever like that you took part in Boston back then? What eventually drew you toward noise music and moving to Japan?

Steve Davis:
hi I hope you are well..thanks for sending those..thats funny about expando brain…I have some copies here of our 12’LP..do you want one? I can send it..as far as the questions here goes- the scene here in MA/boston was great back in the 80’s when I was playing in expando brain..there were many bands and lots of cool spots to play..of course it was so diffferent too..we actually had to call people ..write them ..etc..go to the clubs to speak with them about shows..but as far as the scene there were too many great bands to name…some that I loved were mission of burma, SSD, christmas, volcano suns. big dipper..etcc…too many great bands to list really.. as far as noise I guess I really got into in as far as making it when I was in japan..I had gone for a vacation and on and then decided to move there in 1988..I soon discovered the noise scene in osaka..folks like masonna, monde bruits..and folks like the boredoms.hanadensha..etc..though those 2 werent noise bands. it wasnt just the sounds..it was the mayhem of the performances.so my friends sam lohman and david hopkins decided to do a noise band called J Shi and we did a couple shows at bears in osaka..and just had a couple distortion & delay pedals..a couple basses and a bunch of cymbals and metal stuff..car hood..etc and we set it all up and smashed it and threw ourselves and each other into it all..they were very violent shows..at the same time, around 1990 I began to do +DOG+ and did a couple tapes..the J Shi shows were in 91 & 92 I recall. then I moved back here in ’93 and lived in somerville and began to do shows around MA..the scene then was very small..besides +DOG+ I knew Ron/RRRecords/Emil B, Bill T Miller, Dan Greenwood/Diagram A and Joe Colley was living here then,but moved away not long after that..I was here until the end of 1997 when I moved to CA and when I returned here in 2016 I couldnt believe how the noise/experimetal scene had grown…I did come back a few times and played at the 119 Gallery a few times prior to moving back and could see that there were lots of bands that were ‘new’ and then when I moved back I was introduced to some of these folks who had taken the new england/MA scene and helped it to really take off..

DS:
Is it just me or is there actually a pretty heady noise/experimental community and scene in the Boston area (somewhat), exurbs of Boston, and of course your evergreen Wmass and Providence situations?

SD:
the scene here is amazing and a real source of inspiration for me..I have met and played with so many wonderful people and amazing bands in these past 4 + yrs since I moved back to MA.

DS:
How many bands or performance entities are you involved with currently? And what’s going on with them? I was just listening to these most recent Intensive Studies recordings and they sound great.

SD:
As far as other bands besides +DOG+ I have a project with Edward Giles who is also in +DOG+. called BLUE..its devil music /noise and a project The New Harnessians which is sort of synth & ambient stuff..I dont know..its hard for me to put labels on this stuff really..and yes, I do Intensive Studies with my HS friend Jack..we have trying to destroy and de construct rock music I guess..besides being in the band with Jack, he is one of my dearest friends so that has been such an awesome experience..we call our practice & recording sessions “therapy” which it is.

DS:
Have you been doing a lot of live streams? Are you missing being able to perform in front of people live?

SD:
I have not done any live streaming shows..the boston hassle will be the 1st..I have done a few pre recorded shows too for some west coast shows/fests..and a few others..but I do miss the actual energy of a live show..I have been able to use some of this time to do alot of recording for +DOG+ and the other projects and trying to get to the back log of releases for the label I have Love Earth Music..

DS:
What’s been inspiring to you lately?

SD:
As far as inspiring stuff..I guess its just seeing how everyone is getting by ..how people are trying to find ways to put on shows..perform…and also to learn new stuff..like making videos..I ve seen so many people who have kept going and kept learning new stuff to make it all work while all of this stuff is going on..that is very inspiring to me…also just to see so many cool bands/acts and people around here ..its very inspiring to see that for sure