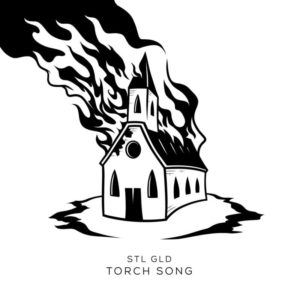 Torch Song is meant to encourage thoughtful discussion about the current state of divisiveness in America instead of encouraging use of the malevolent political put-downs of our time. At the same time, it’s accessible enough to play at a house party or club; the extremely well produced beats, combined with how the political message is delivered in such a passionate, energetic way, are some of its greatest strengths. Moe Pope gives a voice to Americans who feel disenfranchised because of their surroundings and provides details as to how their surroundings affect their decision making, all while addressing race as an issue. In “Tuff”, Moe Pope raps “There ain’t no jobs, ain’t no supermarkets out here/Only check cash and cell phone shops filled with chicken and beer” over a frantic, catchy beat that perfectly fits his attitude of urgency.

The Arcitype’s beats are consistently enjoyable because of how their mood shifts with Moe Pope’s. In “I Can’t Breathe”, Moe raps “Had no father so the gang I follow/Got my back when we blast gas tomorrow” over a haunting, entrancing beat that emphasizes the grimness of that situation. In “GLD II”, Moe has a lively attitude, sharing pieces of stories from his youth over a mesmerizing, uplifting beat that stops and goes in an effortless flow.

After the anthemic “Hold On”, with a surprisingly fitting western barroom feel (while still very much being hip-hop music), Torch Song only gets more momentous, tackling police brutality and the depressing reality of living in an environment where success feels out of reach. In “The Cost”, Moe sings “When we die, the whole world watch/Got black on black crime on the blocks” in one of his anthemic choruses that captures one of Torch Song’s best features: the powerful, complex political themes packed into catchy, spirited lyrics. Moe laments about personal frustrations, but in a way that makes them fit in with grander, systemic problems, such as a lack of grocery stores in low income areas. Putting brutal honesty into his lyrics, Moe raps “I can’t even pay the bills/I can’t admit what is real/I’m just rapping what I feel/The whole block behind bars” in “Tuff”, an anthem about an environment designed to limit ones potential for success.

In “Around Here”, the Arcitype takes a turn toward trap music with blasts of bass that pull the song up and down constantly. “No Doz” is a standout track because it offers a break from the direct political messages of Torch Song. It’s fast paced, techno-like verses help Torch Song in terms of variety, which it has no shortage of. Finally, in the title track, anger is put aside to make room for an unbiased reflection of Moe’s experience as a rapper and member of society. He explores how rap music has influenced his life and how he’s used that and his family to push himself through times of despair.

Torch Song is an impressive album, but the featured artists help lift it to a level above impressive. Hite’s solo in “Beneath The Skin” acts as an appropriate warning for the rapping about to come. Latrell James’ verse in “GLD II” makes it clear why he’s the voice in a recent Cheerios commercial; his verse was the perfect upbeat accompaniment to Moe’s. Other local artists, including Spnda, Dutch Rebelle, Avenue, and Mecca Cashier, helped emphasize Moe’s points by candidly sharing their experiences and thoughts on the subject matter.

One of the most powerful lines on Torch Song comes in the seemingly out of nowhere J. Ring solo at the end of “P.T.S.D.” When he shouts “Killing love with your lying ass politically correct fake pussy bullshit”, the political message of Torch Song becomes that much clearer. Torch Song is about taking action with the best intentions, not ones in which one is just trying be politically correct or have bragging rights. It’s relatability, combined with it’s sincere desire to fix the epic problems of our time, come together to be an album embracing the everyday struggles Americans face, pushing for positive change. The emotions in Torch Song consistently feel very directed and present for the right reasons.