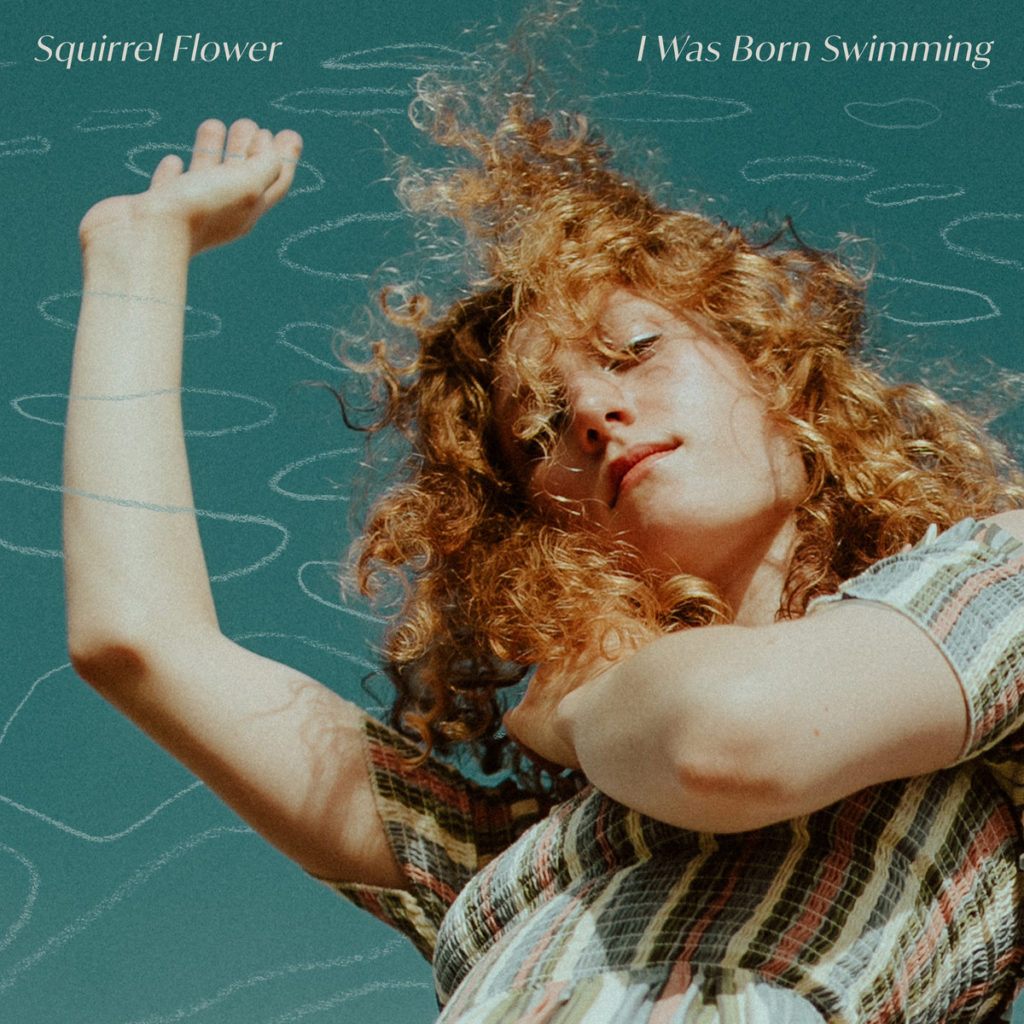 It’s fitting that first thing you hear off Squirrel Flower’s debut album I was Born Swimming is Ella Williams’ vocals. On the opening track, “I-80,” her deeply warm and even voice gently sings “I tried to be lyrical but lyrics failed me. So I gave up poetry and ran west on I-80.” Her vocals instantly trap the listener as “I-80” builds into a sort of eerie march with the entrance of looping drums. Williams sings, “I tried to be my best to you/ I tried my hardest/ but I couldn’t keep it down I had to keep going” as the music becomes increasingly intense with the rhythmic guitar building until it stops suddenly. It almost sounds like a different song as Williams picks up again, singing “turn away, fly away,” with a sense of acceptance. As calm as this ending is, in last few seconds we hear the same guitar notes from the beginning and are reminded of the darker beginning.

The following track and lead single, “Red Shoulders,” is the strongest of the record. It opens with a bluesy guitar riff and leads into Williams’ enchanting voice singing “You call me over / Red on your shoulder.” Eventually the song breaks into a highly melodic instrumental section with jangly guitar riffs and crashing drums that is reminiscent of post-hardcore emo. Her vocals add depth and clarity as she sings “You’re one for healing/ but I’m still reeling/ from your last call” before returning to the instrument breakdown. “Red Shoulders” highlights Williams’ strengths as a songwriter and vocalist. Her poetic lyrics sung with warm, yet piercing vocals naturally melt into the instrumental sections and offer a well-balanced and beautiful musical experience.

Another strong track is the third titled “Slapback.” Similar to the opening track, “I-80,” “Slapback” is heavily rhythmic and seems to be building to something. The acoustic guitar that opens the song is low and paced. As the song progresses, the tempo picks up and Williams sings “You can tell me that my body is sacred/ and then you could take it all back.” There is a dark tone as the music intensifies as we hear her sing “You don’t care what my answer is but/ if you slap me I’ll slap you right back.” The rhythmic guitar continues and leads to the height, where Williams comes to a realization. The emotion behind this realization is commanding and can be heard in the softness of Williams’ voice as she sings, “So I’ll be quiet/ I’ll be gentle/ and I’ll call you right back.” This track especially captures the vulnerability of realization.

“Rush,” has a muted quality with the slightly muffled drums and soft guitar, yet vocals are clear and convey the emotion of the lyrics. “Rush,” stands out as a careful and contemplative track. “Belly of the City” is a slow ballad and almost seems to stand still or stop completely at times.

“Headlights,” offers a slow, meditative, and beautifully narrated examination of passing time that’s explored through the imagery of driving through fog. Another track that stands out is “Streetlight Blues.” The title itself speaks to the country and bluesy characteristics of this track. The twangy guitar riffs throughout the song accompany the summertime imagery of bugs in the streetlight. She is able to convey the emotions behind the lyrics through her vocal inflections in moments like when she sings, “You’re a street light buzzing / about to go out.”

The final and title track, “I was Born Swimming” has a similar melody to the opening, “I-80,” although it is much slower. “I was Born Swimming” is a meditative end to the record. Once again, the emotion William’ conveys through her vocals stands out and the soft guitar supports with a warm melody. The final track ends abruptly, but with the record on repeat it loops perfectly back to “I-80” and the first three tracks that standout the most. While each song has its place on the album, the first three, “I-80,” “Red Shoulder,” and “Slapback” showcase Williams’s strengths and her ability to connect. Through I was Born Swimming, her vocals, lyrics, and arrangement translates into a very real and vulnerable piece of art that captivates listeners.