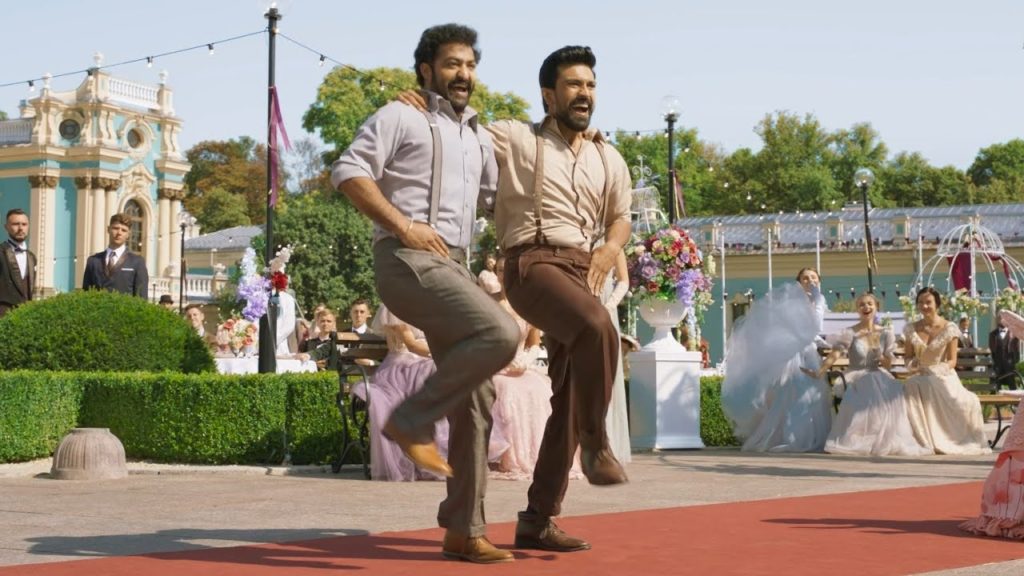 In his review of Star Wars: Episode III — Revenge of the Sith (2005), Roger Ebert wrote with his usual eloquence, “special effects should be judged not by their complexity but by the degree that they stimulate the imagination.” This lesson was neglected, discarded, or perhaps never learned by many of Hollywood’s big-budget filmmakers. This isn’t the case for S.S. Rajamouli, the biggest director in Telugu cinema and most recently the creative behind the hit RRR (2022). Rajamouli’s kinetic imagination makes for one of the most daring creative visionaries working in the digital format.

Special effects in Western blockbusters lean without compromise into verisimilitude– hence, the emphasis on “practical” effects. There’s bound to be a sizeable amount of discourse about how the effects are “real” after the release of every new Tom Cruise or Christopher Nolan movie.  And outside of the chosen few that purport to be attached to old-school practicality, the reproduction of reality reigns supreme in the minds of directors and visual effects supervisors alike, especially in visualizing decidedly unrealistic effects.

A scene from season two of The Mandalorian showcases this default framework. Spaceships aren’t real. Frog-humanoids also aren’t real (that we know of…). But they feel like they could be.

Mando’s ship interacts with the snowy environment in a way that viewers can physically reference. It recalls common experiences with car crashes, whether in real life or through news media. This isn’t to say the scene should have been done any other way; part of the magic of the original Star Wars was the gritty realness of its “used future look.” Yet, it’s a simple example of the mentality that has dominated Hollywood special effects for some time now.

The truck flip in The Dark Knight (2008) also demonstrates Hollywood’s addiction to realism. The flip itself is famously “real,” and people loved its textured realness. (While you’re at it, take a gander at the comments on the YouTube clip: tankmaster1018 says, “I like how they only used CGI to remove the piston that was lying on the street still and the camera cars. That’s is how you use CGI.”) The gold standard for Hollywood visual effects is just that: it looks real.

Rajamouli shows no such restrictions, even if he feels them. His 2012 movie Eega replaces the protagonist played by Naveen Babu Ghanta (better known as Nani) with a fly within the first third of the film, a remarkably bold move in Tollywood’s star-powered market, as R. Emmet Sweeney pointed out for Film Comment. 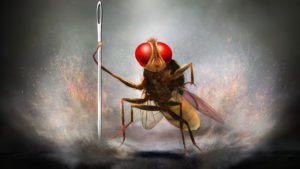 The main character turned fly is slightly less gross than Jeff Goldblum in The Fly (1986).

Rajamouli turned up all notches in the action masala Bāhubali, the stereotypical exemplar of Indian maximalism. The human-catapult scene in the second part has been memed and gif’d into oblivion on film Twitter. Memeability aside, the scene is an excellent example of Rajamouli and company at their best—and they utilize visual effects in a way that resembles B-level action films more than Mission Impossible or The Avengers. The shield cannonball moves too smoothly and unrealistically fast through space after launch. The bounce-landing, too, happens without giving up most attention to how real it looks. (I’m pretty sure the floor on top of the wall is completely CGI, perhaps that’s a trampoline underneath.) And the destruction is simply absurd.

Like Ebert, Rajamouli thinks special effects have the ability to be, well, special. His entire use of digital “film”-making speaks to the dominance of the imagination in his visual vision. In an American box office dominated by the quippy Marvel-Esque, blue-beam-in-the-sky blockbuster that’s always a tad monochromatic and visually safe, his filmography eclipses the possible, and this is especially the case in his newest release, RRR.

RRR is special effects cinema at its finest. In a nationalistic rewriting of Indian political history (the script was written by Rajamouli’s father), two real-life anti-colonial revolutionaries meet and become best friends. Alluri Sitarama Raju (Ram Charan) is first seen in macho cop attire, taking on hordes of men protesting outside a police station with utter prowess. (Only later is his undercover mission revealed: to be appointed a weapon shipment assignment and reroute the guns to his village for a long-postponed revolution.) Meanwhile, the British crown’s provincial representative kidnaps a child from the Gong tribe, and Komaram Bheem (N.T. Rama Rao, Jr.) is willing to do the impossible to bring her back: track, trap, and capture the most dangerous animals of the South Indian jungle to use as weapons of liberation. As Bheem leaves a trail of havoc in the city, Raju is assigned with capturing the “criminal,” although he knows nothing about the man he is chasing. After together saving a boy in danger, the two become best friends.

RRR rises and revolts against both Western colonialism and filmic grammar. But Indian filmmakers have been muddling with the latter for a while. Anyone with a semblance of familiarity with contemporary Bollywood or Tollywood knows this. Another Telugu film, Saaho (2019), directed by Sujeeth, cares even less about realism than Rajamouli; the latter just happens to be one of the best, and RRR is a manifestation of his skill.

One explanation for the differences in the visual effects between Hollywood and Tollywood, of course, is the budget disparity. According to V. Srinivas Mohan, the visual effects supervisor on both Bāhubali: The Beginning and RRR, the latter made use of 18 VFX houses and nearly 2800 VFX shots; Avengers: Endgame worked with a comparative 14 houses and used VFX in 2,496 shots. The budgetary difference between these two is almost $400 million—meaning each shot in RRR is worked on for significantly less time than its Marvel peer that uses a similar number of VFX shots.

This is inevitably an incomplete answer, though. For one matter, RRR looks better than Endgame. When the two leads land in the water after saving the child from an exploding train, the camera gets “wet” with them (or their CGI doubles). In celebration, they walk on the floor of the river bed gleefully toward each other, as the glowing orange-red remnants of a train simmer out underwater. The fire remains lit long enough to deliver a beautiful red-blue contrast swimming on top of the actors. There’s not a shot in Avengers: Endgame to rival. It’s also worth drawing attention to the fact that, thanks to the customary regional warning at the beginning of the film that cautions that all animals are completely CGI, RRR gives added attention to their computer-generated images. With more attention to the computer-generatedness of the animals, it’s still astonishing work.

This is not to mention the fact that we’ve seen what Disney does with smaller budgets: Obi-Wan Kenobi has had pretty atrocious effects by typical standards. The problem isn’t the visual effects themselves, though, but rather that the showrunners don’t know how to creatively direct VFX; the Star Wars show uses “virtual production” but limits the scope of the technology by exclusively using small digitally created “sets,” unlike The Lion King (2019).

Rajamouli has a singular eye for indefatigable, kinetic visuals. Look at the second(!) tiger fight of the movie. There’s no need for my comment:

And this doesn’t even include the mid-air torch punch to the animal’s face a few moments later. Every frame is filled with complex and purposeful motion. The rolling unveiling of the cages alone merits multiple viewings. Since the animals are completely CG, these complex shots had to be prepared completely before production, including the relatively long take with Bheem gliding under the jumping animal sandwiched between slow-motion encounters. The camera elicits pandemonium by carefully tracking the animals and frequently switching among them. No shot lingers too long—one of the easiest mistakes to make with slow-motion.

Ebert’s quote encapsulates what makes Rajamouli’s films so singular: imagination supersedes realism. Of course, this doesn’t mean he doesn’t care for the verisimilar at all. He does. He’s been longing for real-time visualizations for more than a decade. But if it’s a scale, it’s perfectly balanced rather than tipping in realism’s favor.

Elsewhere, the “camera” of K.K. Senthil Kumar moves in ways cameras can’t actually move— the movement is executed digitally. This is nothing revolutionary. Directors have been flirting with this technique for the past few decades or so. But it’s still an exception to the normativity of realism. 2019’s The Lion King again proves an interesting comparison. Technically classifiable as an animated film because the remake “was made entirely using computer-generated imagery, all 1,600 shots of it,” director Jon Favreau still repeatedly chose to replicate the camera motions of real, physical cameras. By contrast, when Kumar’s camera moves in unrealistic ways, it’s typically by racing at Usain Bolt-speeds through digital terrain toward the action. Likely in lieu of a dolly-zoom, it’s something only possible in a cinema that has embraced the digital.

Even non-action scenes make wonderful use of special effects. In one of the best dance numbers I’ve ever seen, the “Naatu Naatu” scene that achieved world fame from the trailer, Rajamouli plays with frame rate and general speed of a fun dance number like it’s the big battle in one of Zach Snyder’s movies. Pay attention to the legs of the two leads. On several occasions, if not the majority of the time, they move faster than humanly possible. There are at least two instances, including the already Twitter-favorite “overall shot,” where the legs are moving at this unrealistic speed but the audience and their upper bodies seem normal. Based on my amateur understanding of visual effects, the legs are likely CG doubles or rotoscoped in order to get them to move at a different speed from the rest of the crowd. How this is done is less important than what’s actually happening: the legs of Raju and Bheem move at noticeably unrealistic speeds while other elements within the frame don’t. If this isn’t a convincing case for RRR’s peerless artistry—or, for cinema itself—I’m not sure the motion picture has a future worth watching.

There is something fundamentally different between Rajamouli’s use of VFX and Hollywood filmmakers like Christopher Nolan or Kevin Feige. A scene with as much magic as Naatu Naatu would never find its way into a Damien Chazelle musical or a Disney live-action remake.

For Rajamouli, the real is already fantastical. His artistic vision and cinematic eye capture that, the metaphysical recognition that our world is fantastic, brimming with life and color—full of myths that retain their mythicness and impossibilities realized daily. For Hollywood, by contrast, the fantastical must become real.

“The entire movie is filled with an absolute splendor of the pulp sublime.” This quote, from Richard Brody’s essay on the Star Wars prequel trilogy (which is maybe the best piece of film criticism I’ve ever read), might pin-point the difference between Hollywood and Tollywood. Lucas, one of the most important directors in the world and especially for visual effects, is a director of the “pulp sublime.” Rajamouli is a director of the “sublime real.”