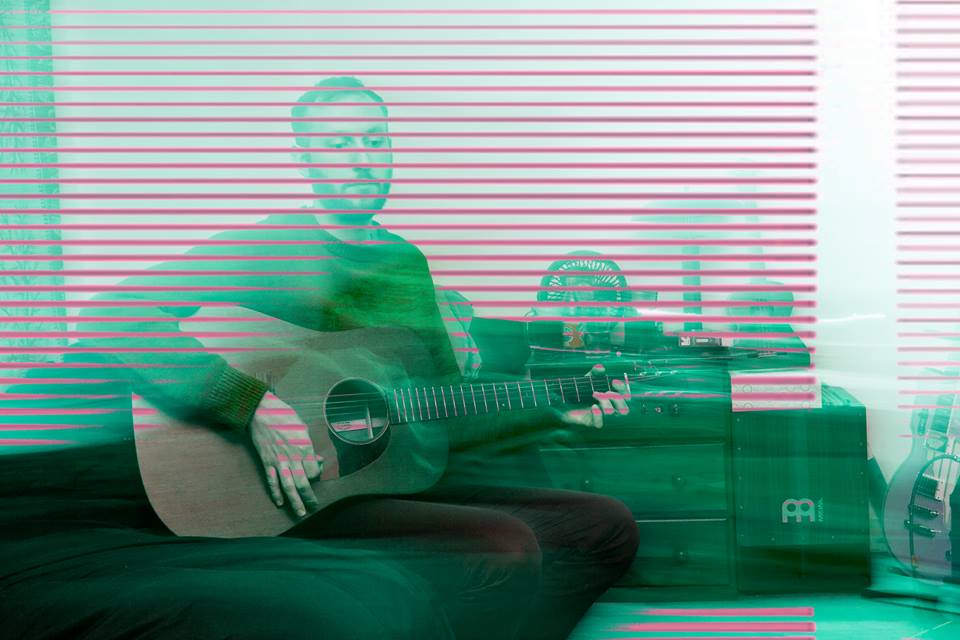 A former bassist of the Boston based alt-rock band Mokita, Daniel Juergens now operates under the moniker, Slow Haste, as a solo indie-folk-electronic act. He’s recently surfaced with a debut 5-track EP, entitled MERMAID, which balances these three genres masterfully. In striking contrast to Mokita’s sunny, clear-sky sound, MERMAID is a blurry, impressionistic work – a sonic equivalent to opening your eyes underwater.

MERMAID disguises itself in lullaby. There is a comfortable warmth to its guitar-driven tracks, but Juergens keeps himself at a calculated distance, vocals heavily drenched in reverb. You’ll find Juergens is also a big fan of noise fx (“Circle”) and synths (“Switcher”), which hit without warning. These moments shake you out of dream-state, which is what makes MERMAID so dynamic and worth the multiple listens.

Thankfully, Juergens was open to premiering MERMAID with us as well as discussing the process. 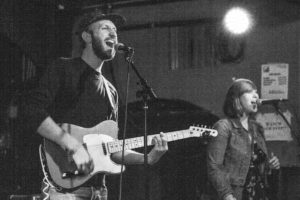 Three years went into five tracks. Clearly, you’ve spent some time on these songs. What was the process and timeline like in creating MERMAID?

The whole record is a cross section of my musical influences, and I think the 5 tracks cover a lot of ground, musically. The first two tracks I wrote from the record are “Switcher” and “First”.  I wrote those just before I moved from Maine to Boston during the winter of 2015.  During my time in Boston I played bass with the band Mokita, and wasn’t putting a ton of time into my solo material…Fast forward a couple of years to winter 2017. Steph Durwin (engineer/mixer/producer) messaged me basically saying, “Hey, I like your stuff! Drop a line if you ever want to record.”  That recognition – knowing that somebody else was digging my tunes – was what really drove me to focus more time and energy into my solo material.  So, I wrote a few more tracks in preparation to record MERMAID.  It was nice to give myself a deadline as motivation to make definite decisions about arrangements, which I tend to struggle with when I write.

Sonically, there’s so much going on in MERMAID. Looping, panning, reverb. Is there any music gear you’d like to nerd out about – signature equipment you’ve turned to that made MERMAID what it is?

I’ve only really gotten into playing electric guitar in the past couple years.  Guitar effects pedals have been a huge part of that for me, because I can do all of the weird/fun production tricks I’ve learned in recording software, but with physical objects.  It’s very much an interactive experience for me.  Honestly, they’re like toys – little boxes with buttons and knobs that make unique sounds.  In all seriousness though, some of these effects have inspired entire eras/genres of music (e.g. that now seemingly-cheesy 80s chorus guitar sound).  My two favorite pedals I have are the Météore by Caroline Guitar Company, and the Warped Vinyl by Chase Bliss Audio.  The Météore is a splashy and reflective reverb pedal inspired by the Paris Métro Line 14, constructed and adorned with glass and steel.  I use that throughout the track “Mermaid”.  The Warped Vinyl is a vibrato pedal, which I use to add warmth and very slowly and subtly modulate the pitch of the guitar.  It can be heard on the lead line of “First.”

You previously described this record to be a halfway point between Sufjan Stevens and James Blake. Are there any lesser known artists who have inspired Mermaid you can put our readers onto?

Can you talk about the art direction for Mermaid’s cover?

First off, Burke Oppenheim edited it for me and designed the rest of the album art.  Thanks Burke.  One of the hardest decisions I had to make for MERMAID was the cover art.  I had decided on the title of the EP because of the mythology, and knew I wanted a photograph with some sort of aquatic theme.  I spent time looking through old photos I’d taken, and this particular image resonated with me.  It’s a candid I took of (my girlfriend) Haley on Stoney Beach in Woods Hole, MA.  Most importantly, the visual sets a mood for the music.  It’s hazy and murky.  It’s the ocean and the sky and a girl masked by the fog, underneath a screen of color.  I like it because it shows all of these physical barriers in front of things that are really apparent and simple and important.  I like to think it parallels the music, where little details come together to create a specific atmosphere.

Lastly, are there any takeaways you hope your listener leaves with once they take out their earbuds when MERMAID ends?

I guess I would say that sometimes, it’s okay that it isn’t okay.  Most of these tracks are pretty solemn throughout, but each of them contains a glimpse of hope.  They all exist because I’m better for having experienced any of the particular events that led me to this point.  There’s a lot of lyrical content specific to these occurrences, and it can become a bit abstracted at points, but I believe it’s in a way that makes it more relatable.  I hope listeners find something that surprises them.  I hope that it makes them want to listen to it again, and that they get more from it with each listen.

Listen to MERMAID by Slow Haste below.