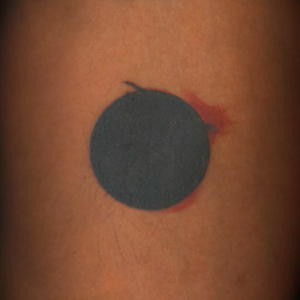 A little more than a year removed from the release of his debut album A Quiet Farwell, 2016-2018, New York multi-media artist Slauson Malone has released a follow-up entitled Vergangenheitsbewältigung (Crater Speak).

Vergangenheitsbewältigung is, in the simplest terms, a sort of sister record to its predecessor. Every song on the project is either a numbered sequel to,or a musical reinterpretation of a song from A Quiet Farwell, picking up with a continuation of the “Smile” suite from that record. Only, that doesn’t quite explain the whole of it.Vergangenheitsbewältigung begins not with “Smile #7” but “Simile #7.” It’s the kind of detail that a lot of listeners might not even register, especially at first glance. It’s also an exceptionally elegant demonstration of the sort of self-contradiction that exists at the core of the record, and fuels much of the dialogue between it and A Quiet Farwell. “Simile #7” establishes the record as something not only like its sibling, but also as intentionally distinct from it – a point of comparison.

This brings us to the project’s central mechanism. Shortly before the release of Vergangenheitsbewältigung, Malone altered the title of A Quiet Farwell to include the addendum (Crater Speak). The phrase was also the title of his catalog, which was originally made to accompany a visual art exhibition of ♪A star like any other. With the album title change came edits to each individual song title, flagging page numbers as references. When Vergangenheitsbewältigungwas officially released the same (Crater Speak) title, page references were present.

Malone – who exhibited both the Crater Speak catalog and ♪A star like any other under his birth name, Jasper Marsalis – described the catalog as “an unreliable guide of materials that influence artistic and musical practice, loosely defined into associative chapters, outlining a perimeter. That perimeter being the rim of a ‘crater’. An absence present. Here by unimaginable heat, scale, speed, and violence. Collision to disintegration  to (see The Thing 1982).”

This idea of the crater is felt most profoundly in the sonic shift between A Quiet Farwell and Vergangenheitsbewältigung. Trading primarily sample and loop based production for live performance and acoustic instrumentation while centering Malone’s own singing voice, the album invites the interpretation that it is more “personal” or “vulnerable” or, ultimately, representational of Malone himself. Obfuscations are cleared away, once unintelligible vocal recordings – like the contribution of rapper MIKE on “Smile #5” – are rendered in their raw and unedited states, and more traditional song structures emerge where once only ever shifting soundscapes existed.

These changes makes for many thrilling and immaculately constructed moments – particularly the visceral emotional arc of “Smile #6” and “Smile #5” and the stripped back performance of “The Wake Pt. 3 & 2.” There isn’t a moment on the record that feels unpolished or unconsidered, with lush and beautiful recording, layered vocal harmonies and instrumentation, and carefully placed samples of found audio.

Malone also continues to show off his skills as a songwriter, with lengthy verses on “Smile #6”, “Smile #5”, and “THE MESSAGE 3: Blood.” The combination of these techniques leads to some of the most startling, intense musical moments you’re likely to hear this year, as well as some of the most gorgeous and tender passages of Malone’s discography. This dichotomy of the tender and the terrifying is maybe the most direct consequence of that  “unimaginable heat, scale, speed, and violence” at the core of the work, as the artist’s relationship with his “ blackness, queerness, objectness” – all terms taken from the same statement as the previous quotation – is laid barer than ever.

These changes do not, however, make for a more “vulnerable” artistic statement, nor does the continued examination of identity as constructed by race, sexuality, or commodity necessarily facilitate a truer understanding of Slauson Malone. While the record may serve as a clearer definition of space, or a more literal representation of self, such definitions or representations are, ultimately, achieved through destruction, through the disintegration of A Quiet Farwell’s dense, intricate facsimiles. These markers of identity function here in much the same way, constructed through the undoing of true, individual personhood, transmuting the incommunicable nature of one’s own humanity into something more present and immediate. More tangible, and yet, not necessarily of the same depth.

It calls to mind Anne Carson’s Decreation, which theorizes, broadly, that the capital-s Sublime in an artwork is achieved through the annihilation of the work itself. Art, to Carson, is a documentary technique, it seeks to represent things. It is only, however, when such a documentary technique fails, becomes self-defeating, or is otherwise derailed, that true engagement with the Sublime is possible, precisely because the Sublime is itself un-representable.

The crater created by Vergangenheitsbewältigung may define Slauson Malone more decisively, but by pointing at the edges of the crater, rather than the basin itself, it seems to say that such a definition is beside the point to begin with. Malone describes himself as “haunted by likenesses. Haunted by self.” On its surface, this record appears like an exercise in creating such a likeness, in establishing the self. In practice it feels more like conjuring a ghost, like standing in between two mirrors and watching as the image of the self-reflects endlessly into an imperceivable green-black fog.

The cover artwork for Vergangenheitsbewältigung– which features the cover artwork of A Quiet Farwell tattooed on a fan’s arm – establishes it as a work of skin and bone, of literal humanity, as opposed to its abstract representation. It’s up to the listener, then, to decide whether the literal or the abstract sketches a more absolute likeness, and to wonder whether the “absence present” is more substantial than the presence absent. Or maybe the question is just, if a tree falls in the woods, and no one is around to hear it, would you stop to listen?