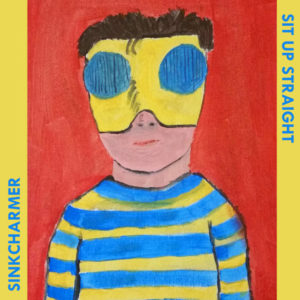 After a 10 year hiatus, Boston area underground songsmith SinkCharmer returns with a self-produced electronic record full of inducing beats and obscure melodic nuance. Composed and recorded using only a groovebox, Paul Coleman delivers 6 interesting songs, shifting from the dark beats in “Sit up Straight” to the overloaded and heavy “Cauliflower Love.”

The first track, the aforementioned “Sit up Straight”,  is an upbeat track that orbits around a very simple pattern and added layers of processed guitars. SinkCharmer sets the tone of the album, which is built mainly around melodic variations.

“Dystopian father”, with its building intensity, relies on a constant 2 & 4 beat over which Paul’s first lyrics gently rest. The ambient effects in the background help enlarge the song, giving it a layer of depth that adds space for the beat and different colors of sound throughout the song. In “Freezing”, SinkCharmer presents a different vision. With a more rocky, more classic approach, Paul writes a song that is a cross between 80’s pop and electronic film scoring. The tweaked and detuned synth notes add a new twist to the album’s sound, pushing the boundaries of possibility further in what is clearly one of the highlights of the record. “Cauliflower Love” is a powerful and dark tune. The harmony is more daring than before, taking turns into unexpected resolutions that prove effective to portray the song’s atmosphere of restlessness. Harmonized guitars sustain the song’s intensity until the finish line in an abrupt coda. Immediately, through the speakers bursts “Lowlight”, which deserves a special mention for its drum sound; very consistent and full in what is a great production by SinkCharmer. The last song of the album, “Sophisticated Star” is a bitter account of the inner musing of an egotistic character who believes himself/herself to the above the rest. This song reminisces the rockier 70’s sound, almost like the power trios, with the added layer of processed vocals. These two sounds blend quite well and elegantly close Sit up Straight.

“But who would know
who’s going to say
who’s going to cross that line when you get in the way
Everyone around knows what you are
A goddamn, modern sophisticated star”