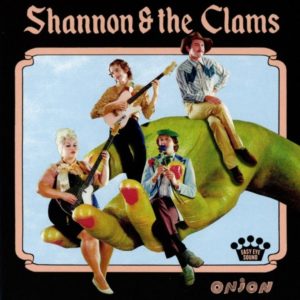 While in the middle of recording their fifth album Onion, The Ghost Ship ( an Oakland warehouse turned venue where they developed their sound) had caught fire claiming the lives of 36, many of whom were friends of the band.  It would be impossible for this event to not have some effect on them but the band masterfully filters this experience into an album that comes out joyous in finding ways to cope with loss while still paying respect to the deceased.

Grief can take many forms and the band explores this the way they know best by channeling it into different scenarios and characters. “Backstreets” embodies a runaway loner searching for direction and when it hits that big dramatic chorus and Shannon pleas where do we go when there’s no place to run it’s like the weight of the world is crashing down around her. On the other side “If You Could Know” is their carpe diem moment played with all the giddiness of a first romance acknowledging the uncertainty of life it still manages to celebrate how great it is to just feel alive sometimes without coming off patronizing.

Upon repeated listens it appears the record isn’t only about consoling themselves but also the artistic community affected and they wisely use this position to dispense some invaluable advice. Referring to the incident more directly on “Strange Wind” and “Don’t Close Your Eyes” it’s never overwhelmed or consumed by despair but instead offering a hand back up. I could easily imagine Roy Orbison crooning the latter ballad that urges the listener to not simply shut the world out but continue pushing forward.

Make no mistake this isn’t an overly sad or morbid record. The Clams may have always had a hint of melancholy to their sound but they can also be tough, tender, goofy and melodramatic with songs that make you want to shake your hips and in that sense nothing has changed.

Bright and soulful, “The Boy” hawks a loogie on toxic masculinity, telling of a repressed child they nail that sixties girl group sound down again with Shannon wearing the character’s ache as a second skin. I buried this heart and years went on by...she sings of a painful past but still holds out hope things can change. Fans searching for another slow, burning tearjerker (a strength of the band) will take great comfort in “Did You Love Me”  whereas the title track is more humorous becoming the kind of earworm that sticks in your head for days as she jokingly compares her own problems to an onion.

Producing the record Dan Auerbach (Black Keys) captures their vintage sound maintaining the simple charm that hooked many fans in the first place without sounding too polished. Releasing some of their strongest songs yet on his own Easy Eye Sound Label he pushes the band to more ambitious arrangements and the band steps up bringing themsleves to a new plateau.