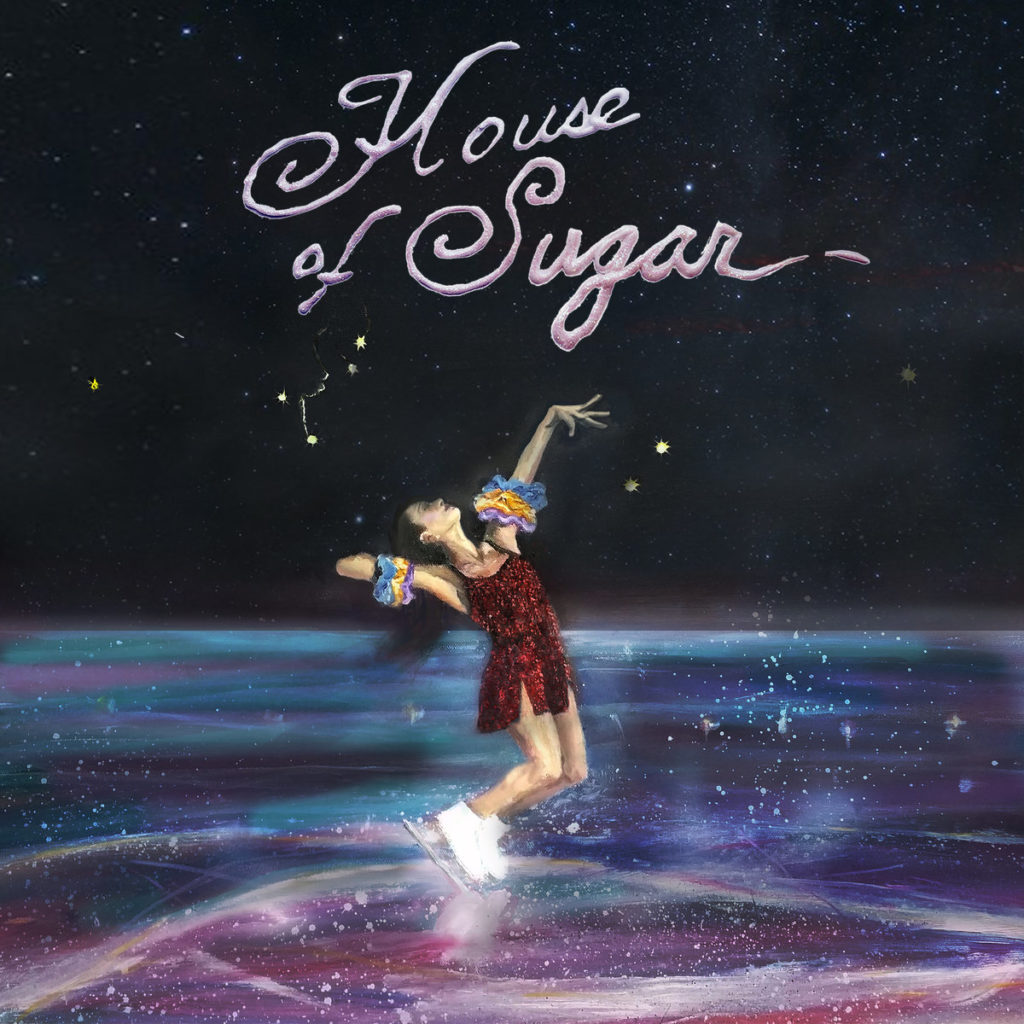 (Sandy) Alex G’s new album House of Sugar is familiar but exciting. His signature slightly distorted vocals and warm melodies shine through on each of the 13 songs. (Sandy) Alex G is the project of Alex Giannascoli and as with his other five albums, Giannascoli is not afraid to experiment with noise and production.

The first track, “Walk Away,” opens with piercing and slowed down vocals singing, “Someday I’m gonna walk away from you” over acoustic guitar. It’s an eerie, dissonant opening that makes the entrance of the drums and bass almost a relief. And with the drums and bass enter Giannascoli’s vocals that repeat “Someday I’m gonna walk away from you. Not today,” obsessively for the rest of the song. The repetition and overlapping vocals, a replay noise, siren, and high guitar parts, blend together to create a smooth, dark melody that sets the mood for the rest of the album.

He follows the opening track with his three singles, “Hope,” “Southern Sky,” and “Gretel.”
“Hope,” while containing the darkest lyrics on the album is more upbeat, and contrasts the melancholy tone of “Walk Away.” The track is an honor to his friend who passed away from an assumed Fentanyl overdose, as told in the lyrics. Giannascoli seems to come to terms with the loss of his friend, in this track. He sings about seeing his friend’s struggle with depression in layered vocals as he plays the guitar enthusiastically. His grief is conveyed not only in the lyrics, but in the tone of his voice and the use of the minor key. It ends abruptly as if cut short.

“Southern Sky,” and “Gretel” follow with similar warm melodies and vocalizations. “Southern Sky” opens with a vaudeville-esque keyboard intro that melts into a twangy folk track. “Gretel,” the lead single and strongest track, mixes a dreamy melody with a minor key. As the song progresses, it gets lower and slows down. There is a howling siren noise hovering in the background throughout the whole song. His soft voice and relaxed tone envelops the listener into his hazy world.

The next three songs, “Tracking,” “Near,” and “Project,” include very few lyrics. It sounds as though Giannascoli is experimenting with editing and repetition with these tracks. In “Near,” Giannascoli plays his guitar quickly and in a manner reminiscent of a math rock style of guitar playing. He sings, “All I want is to be near you,” repeating “you” at least 60 times while alternating the pitch.

One of the most interesting tracks on the album, “Bad Man,” opens with a short drum intro and Giannascoli singing with a southern twang. He sings, “I’m a bad man, how about that.” The song is primarily beat driven, with quick, complicated drum patterns throughout. Giannascoli’s voice is whiny but expressive. He vocalizes with a female voice that adds warmth. “Bad Man” is one of the more stripped down songs was the album, with the focus on the vocals and a slight hip-hop beat.

The vocals on the track “Sugar,” are completely distorted to sound like a computer voice. The dramatic keys make this song feel like the soundtrack to a video game. His lyrics are undecipherable but the electronic distortion support the intense tone.

He follows the heavily edited track “Sugar,” with the slower, “In My Arms.” The track opens with a soft acoustic guitar and develops into a ballad. His voice is soft and unedited. It’s refreshing after “Sugar,” and showcases Giannascoli’s songwriting abilities. He builds from the soft and dreamy acoustic guitar to end with a heavier electric outro. The track “Cow,” follows with a similar energy. It’s a love song with its slow, acoustic guitar, and sweet lyrics. His melodies on this track are catchy and folky. The next song, “Crime” is similar to the two proceeding it. It’s lo-fi and acoustic but the lyrics touch on something much deeper. Giannascoli sings, “A waste of all my time. I’m leaving you tomorrow, let me kill my mind.”
The last song on the “House of Sugar” is a live track called “SugarHouse.” It begins with a jazzy saxophone and funky keys. Giannascoli sings with enthusiasm, “You never really met me. I don’t think anyone has.” The saxophone plays the melody behind the vocals throughout the song. It’s one of his strongest tracks. The tone of the guitar is smooth and warm and the keys and sax repetitive. It’s a good way to end the album in that it has many aspects that the other tracks had, but the sax sets it apart.

Many of the tracks on “House of Sugar” are noisy. Giannascoli fills his songs with melodies and distorted sounds that work together to create the sound of (Sandy) Alex G. The album has strong tracks that highlight his ability as a musician and ones that challenge traditional indie rock music with experimentation. As a whole, “House of Sugar” shows a blend of his skills that created an eerie but warm record.