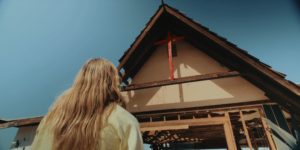 I’m a sucker for horror films where the protagonist has to break a curse. Maybe it’s from my deep-rooted love of It Follows. Who knows? All I can say is that the thought of having something stuck to you – following you – that you can’t get rid of and could very well kill you…that freaks me the hell out, and Threshold did just that.

Leo (Joey Millin) finds his estranged sister Virginia (Madison West) in a run-down apartment, seemingly having some sort of seizure that Leo interprets as an overdose. She’s struggled with addiction for a while, which has kept her family away. When she comes to and calms down, she refuses any sort of medical intervention to Leo’s surprise. She explains to her brother that she has been sober for months and that she is cursed. She has gotten herself involved with some seriously sinister stuff that even he can’t imagine. Convinced that she’s relapsing, Leo is hesitant to believe her. Virginia explains that she’s under the control of a cult, who has bound her to a stranger – and that she feels what he feels. She begs Leo to set off on a cross-country road trip to break her curse, and he agrees, with one condition: she will enter rehab if this is all bullshit.

Impressively shot on two iPhones, Threshold grasps you immediately, and you truly forget that it’s shot so simply – it feels like the studio production of an indie movie. Something I particularly enjoyed about the film is that it centers on the complicated but strong relationship between Leo and Virginia and builds from there, rather than relying on cheap scares. Throughout the road trip, they share little memories they had together, of childhood and young adulthood, from what feels like a past life, when she wasn’t an addict and he was happy with his marriage (with which he is now suffering over). It makes you imagine the people they were before this fateful road trip that’s unfolding before you. These little moments build a believable bond between the two, and adds a refreshing realism and emotion that highlights the terror that much more when the film climaxes with a shocking ending.

Despite its small budget, Threshold doesn’t hold back – it serves up a story neatly tied together with terror and poignancy.