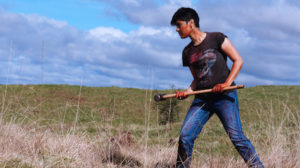 Black Lake is a beautifully shot film, but perhaps not one that everyone will have the patience for. Set against a gripping score and stunning backdrops, Black Lake focuses far too much on the artsiness of the film and not nearly enough on the terror.

The film follows Aarya (K/XI), a young woman looking for inspiration while she house-sits in a large home in Scotland. She receives a red scarf from her aunt (Aditi Bajpai), who has just come back from Pakistan. Following this, Aarya is haunted by a Churail, an evil, angry South-Asian witch (Ayvianna Snow).

While the film’s plot is enticing (the folklore involved was fascinating) and K/XI gives a strong performance (a scene where she is drenched in blood in the pouring rain was truly stunning), the showiness of the film’s aesthetics threw me off. From too-close, oddly-focused shots of people talking on the phone, to quick flashes of scenery, to long scenes that feel out of place in a horror and more in line with an arthouse film, Black Lake was an overall good and beautiful film, just maybe not necessarily a fast-paced film nor packed with chills like I was expecting.