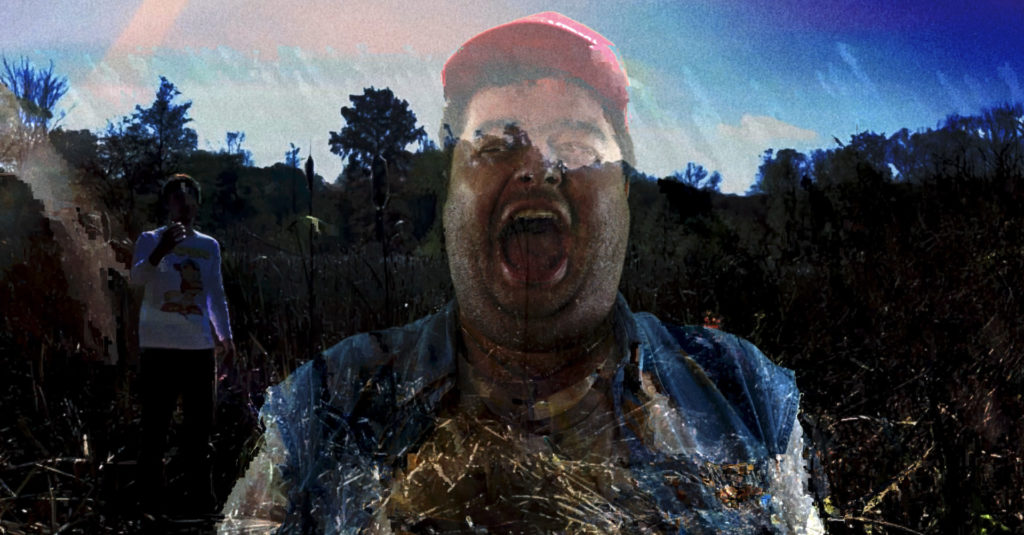 For longtime Hassle readers, the name WL Freeman might ring a bell: from 2016 to 2018, they were a regular contributor to the film section, and one half of our much-loved Promotion Pals team. In early 2019, Freeman reached out to let me know that they would be stepping away from the site for a while, as they were working on developing their own feature film. That film, Brain Death, is now complete, and it is a glitched-out nightmare for the terminally online age. Following a run at the First Hermetic International Film Festival in Venice (where it won the Ficino Award for Best Editing), it can currently be seen closer to home as an official selection at Salem Horror Fest. On the eve of Brain Death’s free in-person screening on Monday, October 11th (before joining the festival’s online program on the 22nd), I caught up with Freeman on Brain Death’s origins, the inspiration to be found in record store customers, and the practical realities of constructing a pig man.

BOSTON HASSLE: This is a question I often lead with as a way of easing into the conversation, but in this case I’m genuinely curious: where did the idea of Brain Death come from?

WL FREEMAN: This is a tough one to pinpoint. In August 2018 my co-director John and I got the idea into our heads that we should make a movie. If I recall correctly, we first set out a general structure we liked and then came up with ideas that we thought were both ambitious and do-able with little to no money. Most of the genre elements started here – with us somehow landing on this idea of a woman entering into a parallel dimension and fighting a Pig Monster and an Ancient Alchemist. Why exactly that became the idea is not too clear to me any longer.

We knew early on we wanted the film to be a character study focusing on a certain type of internet-poisoned city-dwelling millennial, and we knew we wanted to try to honestly reflect what it felt like to live in our chaotic political reality and have a brain that was very poisoned by constant doom-scrolling on Twitter — the question became, how do we entwine these very disparate elements?

While we did eventually make a script out of this thought process, it changed so much during filming and even more so during the editing (for example the “Flesh Orbs” which is a phrase that makes sense if you’ve seen the film, didn’t become an idea until almost a year after filming wrapped) – so because the project was so amorphous, collaborative, and malleable, it was constantly changing, to the point where now I’m not even sure myself where almost any of the ideas came from.

BH: The film is very much steeped in the ugly side of the current political environment, as well as the more troubling aspects of online life in general. Did you find writing the movie to be therapeutic (or perhaps the opposite)?

WLF: Writing the movie was pretty therapeutic – shooting it was very much not so! The stress of scheduling the shoot compounded with living in this paranoid reality of the film was very de-stabilizing. We were always talking about conspiracy theories on set, and when Jeffrey Epstein died during filming it definitely felt like we were actualizing the world of the movie onto the world outside — which was not a healthy way to feel! 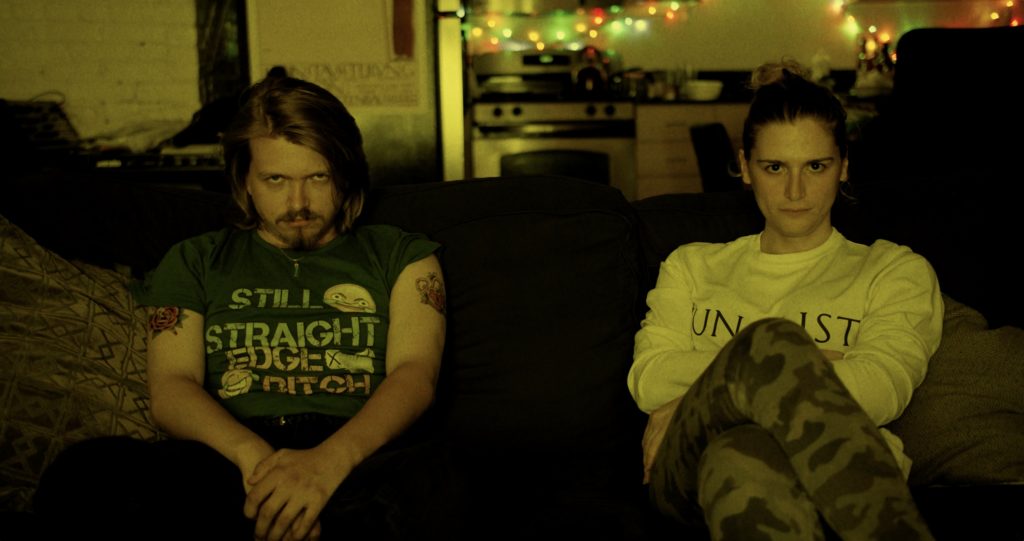 BH: Brain Death is a refreshing example of a genre film with a trans lead. Did your collaboration with Hesse Deni (who also co-wrote the screenplay) help shape the film?

WLF: Definitely. I did not know Hesse when we started conceptualizing the project. Near the end of writing I saw a film by my collaborator Jarrod White (who made portions of the score and can also be seen watching Minions alongside Hesse) called Atrophy!, in which she had a small part. I thought she would be perfect for the character and sent her the script through Jarrod. She agreed to do it and we started workshopping the script together for about three months, reworking the character to better match her and have the dialogue suit her better. During this process she heavily added weight to the emotional component in the character’s relationship with the Katy character, as well as re-writing large portions of the second half of the film, mainly the section where the character finds herself in a small town (we in fact scrapped about thirty percent of what was originally written there and completely rewrote it about a month before filming).

BH: You and I share an alma mater apart from the Hassle: we’ve both served time behind the counter of Planet Records in Cambridge, which is one of the film’s principal locations. How did your experiences there inform the film?

WLF: Well, I knew I had to pull a Kevin Smith and film at my job after work, because Planet is just visually such a great location – and within the narrative it worked so well having this character bus from her media-saturated bedroom to her media-saturated workplace. Knowing we wanted to use the location led naturally to the idea of incorporating some of the oddness unique to working there, mainly in interactions with customers. Almost word-for-word, the scene where “Johnnie” says paying for a bag is a sign of a New World Order happened to my co-worker Harry (who can be seen in the film as Jesse). Spiraling out of writing this scene came the idea to have Johnnie be seeded throughout the film as a sort of MAGA Mister Senor Love Daddy. Of course I must add that any resemblance to persons living is purely coincidental, etc.

A Planet customer actually also inspired the Old Man character. There is this old man who often comes in, and his face is always coated in some sort of medicinal cream. This always freaked me out, and was the initial idea behind this Old Alchemist figure lathering his face in some sort of creamy spread. 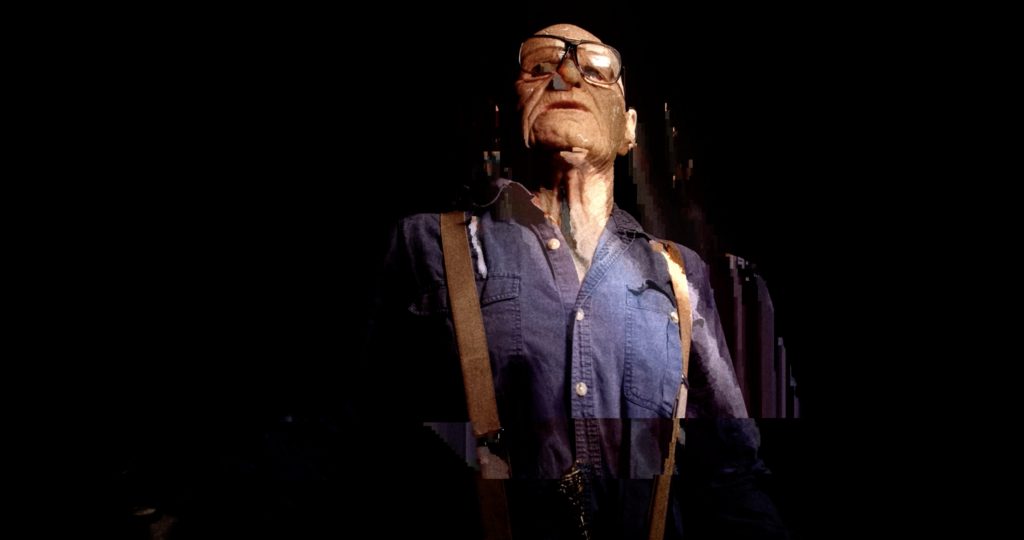 BH: I feel like I would be remiss if I didn’t mention the Pig Man. How did this creation come to be?

WLF: Early on, for whatever reason, we got into our heads that there should be a Pig Man. It was just a very strong image that we hyper-fixated on. Actualizing it seemed impossible. Who the hell is going to play this thing? But we found the perfect mask from this company CFX and once I put it on I felt pretty confident I could play the part (I’m credited under an Icelandic-sounding nom de plume). The costume was partially modeled after John Leguizamo’s turn in Spawn, as is the fat-suit we purchased that I wore.

BH: What’s next, both for Brain Death and for you as a filmmaker?

WLF: Brain Death will be part of the Salem Horror Fest’s virtual program on October 22nd, after screening in-person on the 11th. After that I do not know! We’ve submitted to several more places, but I don’t know if many more places will want to touch such an odd duck. I hope to one day get the film transferred to VHS tape and make those available – an incredibly niche market for an incredibly niche film. We’ve had the idea to sneak the tapes into thrift stores.

Beyond that, John and I are collaborating on a short film currently called Boy Monster, about a disconsolate incel who encounters a sentient pool of mud (we shot it recently and are currently editing), and we also have a short in the pipeline called Baby & Daddy about two lost souls who live in a sort of Nightzone, as I’ve begun to dub it, which we hope will star Elliot Masters, who played Johnnie in Brain Death. We’d love to make something even bigger, but I don’t know if anyone out there wants to fund these ideas of ours haha.