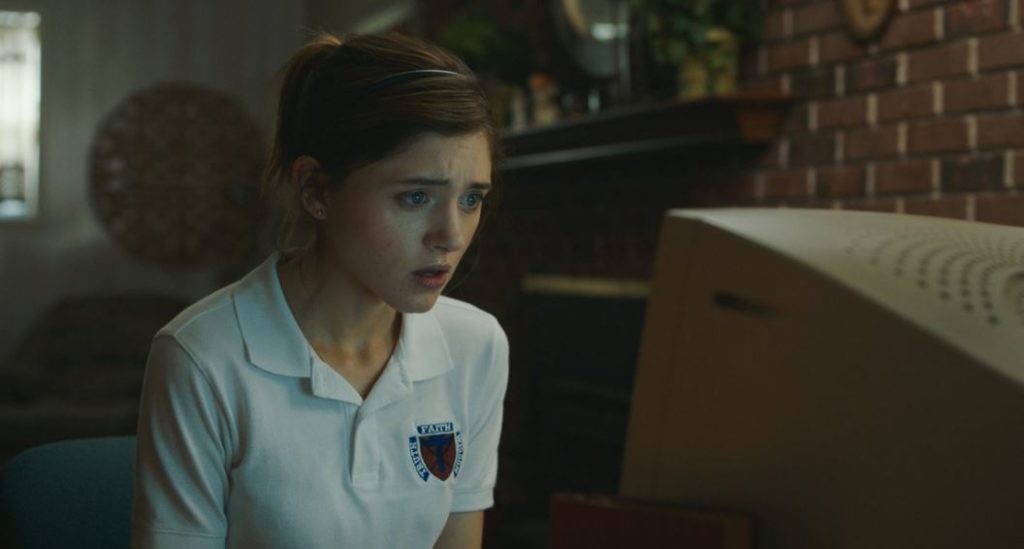 “You won’t be needing a watch anyways, because you’re on Jesus’s time!” Nina (Alisha Boe) exclaims to our protagonist Alice (Natalia Dyer) with such a huge shit-eating grin that you almost think that a blooper was accidentally left in the film’s final cut, and both actresses in the scene will then burst out laughing. Instead, there is the familiar comedic beat, a resigned acceptance indicated by Alice’s face, and the transition to the next ridiculous part. This is the nature of first-time director Karen Maine’s Yes, God, Yes — calling out the hypocritical, oft nonsensical elements of religion through the lens of Alice, a Midwestern teenage girl that shares more character complexes than the lost victim of nonsecular groupthink.

Yes, God, Yes is a lot of things, at least more than what the trailer leads on. It represents an experience from which the children of Internet chat rooms have battle scars, starting with the letters “a/s/l.” There’s patriarchal manipulation using the gospel of the Church and gossip of private high schools. And then there’s Alice, who is drowning underneath it all. Understandably torn between Catholic morality and her awakened feelings about Jack Dawson in Titanic, Alice falls in a triangle-shaped rabbit hole where an AOL online word game gets spicy (a phrase that really was concocted so you can think of this). Under her friend’s persistence, she agrees to go to Kirkos, a spiritual camp that might assuage her from going to hell.

The humor forgoes the American Pie embarrassment antics and lets us root for Alice, even when she’s continuously pitting herself in the wrong situation. Jason Biggs setting up a camcorder to film his study partner undressing is gross; Alice purposefully injuring herself so that she can be carried away by a hairy-armed senior camp leader is a mood. So many of the film’s prized moments should be engraved in Dyer’s name, whose mildness seems to work in the two episodes of Stranger Things that I’ve seen so far and Velvet Buzzsaw (in which anyone who wasn’t acting to the villainous histrionics of Jake Gyllenhaal and Toni Collette was probably a good guy). Apart from muddling in her newfound sexuality, Alice sometimes has lurking moments where she stumbles into others’ private moments — a perspective that’s not wasted under the repeated warning, “God’s always watching you.” In the same way where Jenny Slate’s role in 2014’s Obvious Child (a script that Maine co-wrote) seems to be about the actual Jenny Slate dealing with pregnancy, Natalia Dyer’s doe-eyed innocence works best to a role like this. It’s too early to say where Dyer’s cards will fall in Hollywood, but for someone whose IG is filled with fashion show fits under the handle nattyiceofficial, I’m rooting for nuanced comedy for and by women.

For Maine’s first time directing, she is able to smoothly open the door to the middle of a character’s story and close it during a momentous change, much like walking in on someone, well, beating it off. Unfortunately, she misses the rhythm of the humor at some places with a few too many expository beats; I guarantee that the movie would have been 10x funnier if the definition of tossing someone’s salad wasn’t in the opening credits (pro tip: if you don’t know, don’t look it up and ignore the first twenty seconds!). But if tongue-in-cheek is a preferred sex act, Yes, God, Yes will deliver more electric pizzazz than getting a “what r u wearing?” message from GymHulk42.

Now available on Coolidge Corner’s Virtual Screening Room!
There will also be a livestreamed Q&A with director Karen Maine on Tuesday, July 28.