Miriam (Madeleine Sims-Fewer) is teetering on the brink of divorce from her husband, Caleb (Obi Abili). She visits her younger sister, Greta (Anna Maguire), and her brother-in-law, Dylan (Jesse LaVercombe) in their isolated home in the woods of Canada. Greta, Miriam, and Dylan knew each other as kids—the latter share a close friendship that borders on flirty.

One night by the firepit, after everyone has gone to sleep, Dylan and Miriam reminisce about old teachers they once had and funny stories of their youth. As they continue to drink and their conversation turns to their love lives and Miriam’s marital issues, they kiss. Shocked, Miriam draws back, apologizing, saying it didn’t mean anything. Dylan tells her that it’s no big deal—everyone’s “a little shitty.” They fall asleep, and when Miriam wakes up the next morning, Dylan is raping her.

Devastated and in shock, Miriam confronts Dylan sometime later in a tense, infuriating sequence where Fewer and LaVercombe’s acting really shines. Miriam tells Dylan he raped her—he scoffs at her, telling her that she kissed him first and that they both “hurt each other.” It’s a disgusting display of gaslighting that makes your blood boil. In fact, I found that I couldn’t even look at LaVercombe’s face for the rest of the film.

Miriam tries to tell Greta about what Dylan has done to her, only to be bitterly blamed by her sister, in which Greta asks, “what did you do?”

In a striking and horrific sequence, Miriam lures Dylan to a cabin under the guise of continuing their “affair.” Dylan begins to talk dirty, and Miriam gets him to have a drink, put on a blindfold, and take off his clothes. In a sudden flash of graphic male nudity, Dylan has an erection, and Miriam strikes him in the head with a bat. There’s an ensuing struggle, and it ends with Miriam suffocating Dylan, hanging him from the rafters of the cabin, draining him of blood (much like the slaughtering of a pig—hello, symbolism), and dismembering him. 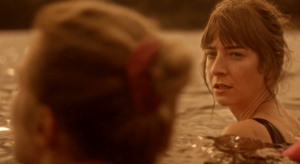 Miriam burns the body and crushes Dylan’s bones to dust. She slips the dust into the vanilla ice cream she makes for a family get-together and serves it. In a sickening last shot, Greta sits beside her sister, puts a hand on Miriam’s thigh to comfort her, licking her ice cream cone. Tears run down Miriam’s face as she watches the guests eat.

One of the biggest disadvantages of Violation is that the film is spliced together with disjointed scenes and time jumps. I didn’t completely understand this choice—it was jarring and allows the viewer to become confused. We never see Greta panic or wonder where Dylan has gone, nor do we find out the cause of the rift between Miriam and Caleb. Linearly telling Miriam’s story would have had allowed for a better understanding of the overall film. It was frustrating to watch, and I found myself having to rewind to better understand what happened in the main scope of the story’s timeline.

Another issue I had was the attempt to use Dylan’s death as a shock factor. Violation‘s climax—in which Miriam strips, slaughters, and dismembers Dylan—is so disturbing and out of the blue that it doesn’t serve its purpose. It comes off as exploitive and is misplaced in a film that uses striking imagery and symbolism to represent its disturbing scenes.

Despite these faults, Violation is a beautifully-written, horrific tale that hits hard and mercilessly, one that I’ll be thinking about for a while. Violation channels the despair of Lars von Trier’s Antichrist and the disturbing relationship dynamic between characters in Ari Aster’s work. I have to commend Sims-Fewer—she’s a brilliant actress who displays tangible fragility and staggering emotional range in her acting.

There are prolonged shots sprinkled throughout the film that aim to upset the viewer, which was a highlight of the film for me. There’s a shot of a black wolf chewing on the frail corpse of a rabbit in the woods when Miriam burns Dylan’s body, and a black fly landing on Miriam’s finger the morning of the rape. They’re completely unsettling, with a searing, unsettling score that lurks in the background of transitioning scenes.

Violation—while far from perfect—is a rape-revenge horror that twists your stomach into knots. Its acting, score, and writing are commendable. It’s haunting, and I know I’ll never watch it again. Why?

I won’t have to. I’ll be thinking of Sims-Fewer’s tear-filled eyes in that final shot for a long, long time.