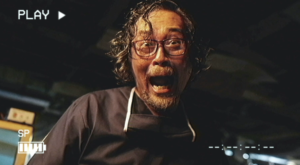 To be honest, I can take or leave found footage films. There are some that are on my horror favorites list, like The Blair Witch Project and The Taking of Deborah Logan, but others I get bored with due to the shakiness of the camera, poor acting, or bad lighting, or slow storytelling.

That being said, one franchise that I have consistently been impressed with is V/H/S, a horror anthology series that allows newer filmmakers in horror cinema to have their voices heard with small narratives that connect to a larger, overarching plot. V/H/S/94 is a reboot, or revitalization of sorts, of the franchise, and it does not fail to stun with its shocking sequences of bloody terror and nightmarish imagery. This gore-slick anthology is not for the faint-hearted or the fly-by-night horror fan.

We plummet into V/H/S/94 with its first segment, Storm Drain, written and directed by Chloe Okuno. The short follows ambitious but illogical reporter Holly Marciano and her sensible cameraman, Jeff, as they investigate the sewers in their small, cloudy town after there’s talk of a rat-man living in them.

It’s a deeply creepy short—I loved the setting that Okuno chose, which allowed for some strategic and terrifying jump scares. Storm Drain’s fun, almost comical ending shocks you with its abrupt gory goodness. Shout-out to Anna Hopkins, who plays Holly with believability– you could tell she was having tons of fun with it.

The Empty Wake by Simon Barrett is the scariest of the film’s segments and—to be frank—pure nightmare fuel. Set in a funeral home during a vicious storm, it tells the story of Hayley, a new worker who’s uneasy about hosting a late wake by herself. She becomes increasingly paranoid when the casket shifts, and she hears knocking coming from inside. Panicked, she calls her boss and the mortician, but both grow irritated and tell her that it’s impossible that the deceased, Andrew Edwards, is alive.

After the electricity shortens out, the tornado siren begins to wail, the casket crashes to the ground, and all hell breaks loose. Barrett did a beautiful job with this one. Everything from the simplistically eerie set, sound, impeccable mood-setting, and disturbing imagery sends sheer terror through the audience. I sat alone in my apartment watching this and I sure as hell didn’t want to get up or turn my back.

While The Empty Wake is the scariest segment of V/H/S/94, Timo Tjahjanto takes the cake for the most disturbing with a gory, brutal, unforgivingly cruel short titled The Subject. This short is not for the faint of heart, and anyone who can’t stomach some really crazy horror should turn it off here—though they’ll be missing some brilliant filmmaking. Spoken in Indonesian and told through the eyes of a young woman known only as S.A., we’re thrown into the hell that is the underground lab of disgraced and insane surgeon Dr. James Suhendra.

A pioneer in mechanical prosthetics, Suhendra has kidnapped S.A. to use her as a test subject in his experiments. Desperate to achieve greatness, he surgically mutilates and deforms her to create a “perfect” biomechanical human, a twisted cyborg.

Tjahjanto’s blend of terrifyingly good actors, depraved imagery, body horror, and gory action makes for an unforgettable story that is seared into my mind. The scene where S.A., panicked, searches Suhendra’s lab and sees his failed previous experiments—well, I don’t think I’ll ever stop thinking about it.

The final segment, Terror, by Ryan Prows, was definitely the weakest short in the anthology due to subject matter and lack of explanation. Terror features a violent militia that echoes the ideologies of National Socialists and white supremacy, aiming to use supernatural sources to eradicate a government building. To be honest, having lived through the Trump era and being a staunch critic and opponent of guns (and Trump and his followers), this story wore me out. The language used felt too Trumpian for me, and the extremism took me out of the narrative. Additionally, there wasn’t much explanation of what truly was going on. However, Prows did beautifully by setting the scene in a desolate, snow-ridden setting, and Terror captures the ’90s aesthetic impressively. Prows creates a creepy atmosphere—and the reveal of his monster was terrifying, no doubt—but I just couldn’t get into this one. The gun-toting antagonists bothered me so much that I was losing patience just watching it.

This anthology has collected some bloody, horrific stories from some brilliant and intelligent filmmakers, and I’m so excited to see what they do next. V/H/S/94 is a wicked bloodbath—a fantastic resurrection of a found footage franchise that I’m so happy is back.

V/H/S/94 is now streaming on Shudder