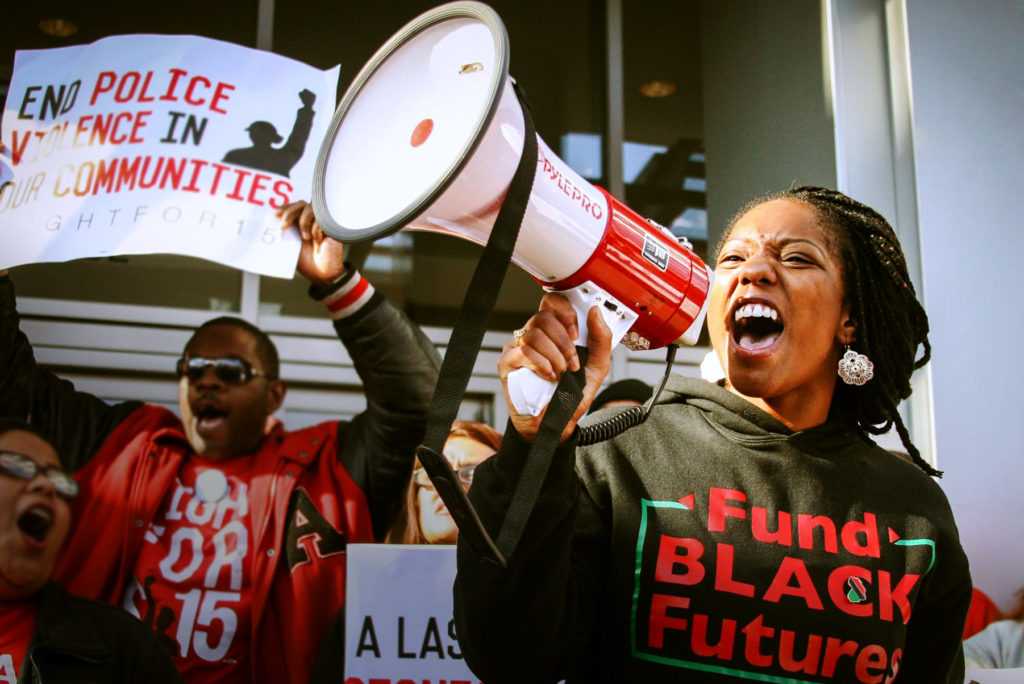 Far from a hobbyist’s mindful diversion, activism stems from a necessity, a hole in a system that we can drive over again and again without realizing how far deep it is for others. It’s another vein that can divert the mental and physical energies from the reserves that we save to care for our loved ones and the financial means to survive. With the unleveled mesas that stand across the socioeconomic and racial landscapes of this country, the activist’s work to end inequality is a slow, yet vastly important, erosion. We don’t have to look far back to see the power of Black Americans that helped turn Georgia blue for the first time in almost two decades, and maybe do our best to stop giving sole credit to the ghost of a senator for Arizona.

Coming at an opportune tidal change in American politics, Ashley O’Shay’s Unapologetic places community activism in Chicago under the microscope — specifically on the faces of Black Youth Project 100 (BYP100)’s Janaé Bonsu and “raptivist” Bella BAHHs (Black Ancestors Here Healing Society). While their personal lives don’t heavily overlap, the documentary shows that there are different faces of participation, and no matter who it is, activism is a lot of fucking hard work. Freshly turned 25, PhD candidate Janaé stresses over the finishing touches of her dissertation proposal, which involves the examination of the relationship between “interpersonal violence and state violence” and the victims’ perception of public safety. Bella, who went viral after a rousing speech at a 2015 protest, uses lyricism as a creative outlet, and often finds herself at a center of a crowd. If we know that a movement, especially one with local roots, needs a spark and a group to begin, Unapologetic allows us to see the nutrients and road blocks that pushes and pulls the individual’s momentum.

While we know that police brutality has spanned decades before, the documentary’s starting blocks settle in 2012, when Rekia Boyd was murdered by an off-duty police officer. In between the classrooms and the recording studio, we see the fire placed under such big-shot seats of mayor Rahm Emanuel, Chief of Police Garry McCarthy, and State’s Attorney Anita Alvarez, warming us to the acknowledgment of a career countdown. It’s important to signify the physical labor of Black women putting their bodies at the front lines or shouting at government buildings with a megaphone, and to also make aware that they have their own shit to worry about.

In Kendrick Lamar’s twelve-minute reconciliation “Sing About Me, Dying of Thirst,” he reflects on the inevitability of a life cut short, an ending that may have been expected given the previous ominous tracks in good kid, mA.A.D city.  One verse ends with “And if I die before your album drop, I hope —” before gunshots interrupt, impressing the listener that he dies, but the lasting wish, “Promise you will sing about me,” haunts throughout the chorus. At protests, Bella uses her signature line, “Even if we don’t, our stories gon’ make it,” where the familiar skill of balancing a poignant sadness over rhythm echoes a harrowing power that still rings as clear. With the ground access of movements and the efforts that lie underneath, Unapologetic is a reminder of the community efforts that are brought into police board meetings, protests, and survival.

Screening is available via DocYard starting on Friday, 11/13 through Thursday, 11/19. Director Ashley O’Shay and editor Rubin Daniels will attend a live, virtual Q&A on Monday, 11/16 @7PM. More information can be found here!