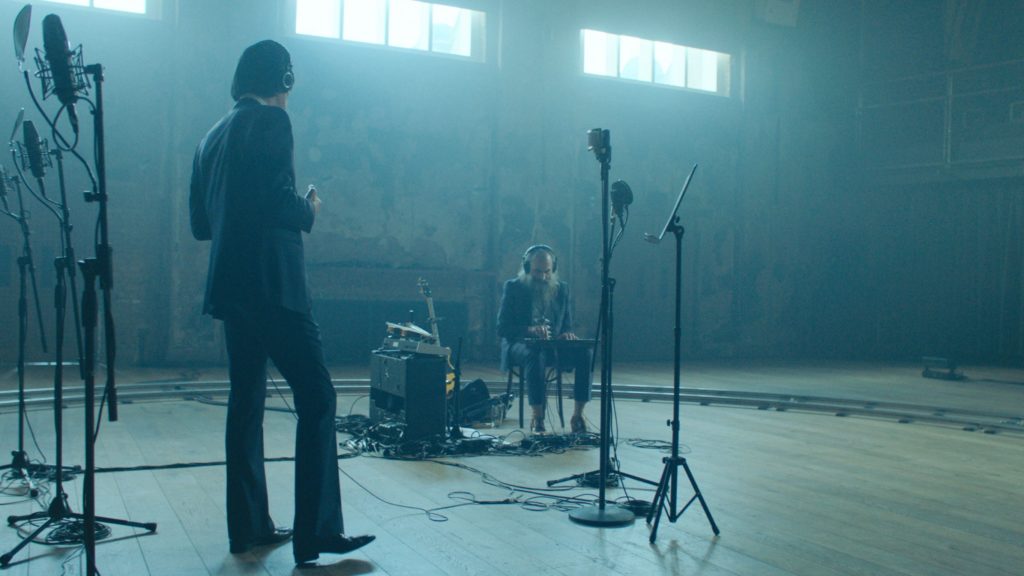 NOTE: The following review was written prior to the tragic news of the death of Nick Cave’s son, Jethro. The Hassle’s heart goes out to Mr. Cave in this time of unfathomable grief.

“I’ve retrained as a ceramicist,” goth-rock legend Nick Cave drily intones in the opening scene of Andrew Dominik’s new documentary This Much I Know to Be True. At first it comes off as a deadpan joke worthy of Christopher Guest, but we soon realize that he’s serious: Cave invites Dominik’s camera into his ceramics studio where he shows off his latest work, a series of hummel-like figurines depicting the life and times of Satan. It’s a surprising venture for the musician, but only slightly; in addition to his work with the Bad Seeds, the Birthday Party, Grinderman, and other musical projects, Cave has served as a novelist, screenwriter, occasional actor, and advice columnist. Would it be that shocking if he spent the remainder of his career crafting tiny porcelain baphomets?

But if that opening scene suggests that the pandemic has driven Cave toward non-musical pursuits, the remainder of the film stands as an act of defiance against the pandemic and its effects. This Much I Know to Be True is, in effect, the first COVID-era concert film. The bulk of the film is devoted to Cave and frequent collaborator Warren Ellis performing songs from 2019’s Ghosteen and 2021’s Carnage, with a revolving assortment of backing musicians and vocalists. In the tradition of such classic concert films as Stop Making Sense and The Last Waltz, Dominik imbues the proceedings with a cinematic sheen, with dramatic spotlights and dynamic camerawork. The only thing missing is the audience: apparently shot during quarantine, the performance takes place entirely in an abandoned cathedral, with the musicians all standing a healthy distance from one another.

The result is something of an odd hybrid, particularly in the early going when the viewer may not be sure if they’re supposed to be watching candid footage of the recording process. The film may consist almost entirely of musicians in a single room, but it is nothing if not dramatic: lights flash, and cinematographer Robbie Ryan’s camera swims around the room, examining the musicians from every angle as they power through Cave’s thunderous ballads (more on those in a bit). Once you become acclimatized to the film’s unusual conceit, it’s difficult not to get swept up; like the best concert filmmakers, Dominik allows us to not only feel like we’ve attended a Nick Cave concert, but to experience it in a way that we couldn’t if we were actually there. 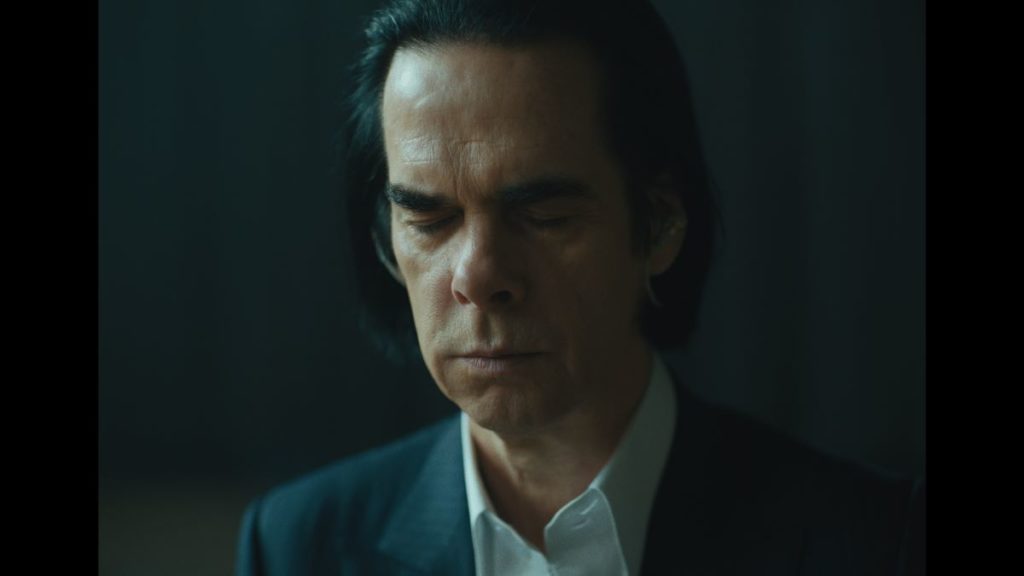 Of course, it helps if one has a taste for Cave’s music, and, if I’m to be perfectly honest, this is where it faltered for me a bit. Cave’s songs tend to swing back and forth from spooky, operatic numbers like “Red Right Hand” and “The Mercy Seat” to more introspective (but no less operatic) piano ballads– “grim reapers and grand weepers,” as Tom Waits once said of his own, similarly bifurcated songbook. I love most of his work in the former camp (which includes most of his Murder Ballads album and the Birthday Party’s entire body of work, if you’re looking for an entry point), but the latter often leaves me cold; even for an artist whose public persona is rooted in all-black morbidity, Cave’s torch songs are just a touch too lugubrious and humorless for my liking. Unfortunately (for me, anyway), the Cave on display in This Much is, for the most part, balladeer Cave; while there are a couple of stompers, such as the pulsing, apocalyptic “Hand of God” and the gloriously profane spoke-sung “White Elephant” (sample lyric: “I’m a Botticelli Venus with a penis / Riding an enormous scalloped fan”), Cave is here mostly looking inward, moaning his heart out in his inimitably purple style. Again, this is a matter of personal taste– I know many who are wildly devoted to the entire Cave catalog– but I feel I should mention it for the sake of similarly fairweather fans.

But even if you’re not the biggest Nick Cave devotee, there is little denying his power as a performer. Rarely has there been a performer whose visual appearance is a better match for his music; lanky and gaunt, with a receding bob of jet-black hair, he looks as if he just walked out of an Edward Gorey illustration. And whatever one’s opinion of his songs, the fact remains that he sings the hell out of them, in a booming baritone pitched somewhere between a revival-house preacher and late-period Scott Walker. Like the best rock frontmen, Cave often appears something not quite human while performing, his movements and vocalization setting off the uncanny valley sensors in one’s brain. And, in Ellis, Cave has found a perfect foil, alternately hunched over an analog synth or screeching on an amplified violin, looking borderline feral in his graying wild-man beard. In a way, the duo are the ideal test subjects for the non-concert concert film; if I was in a room with them, I can see myself forgetting I wasn’t watching an arena show. 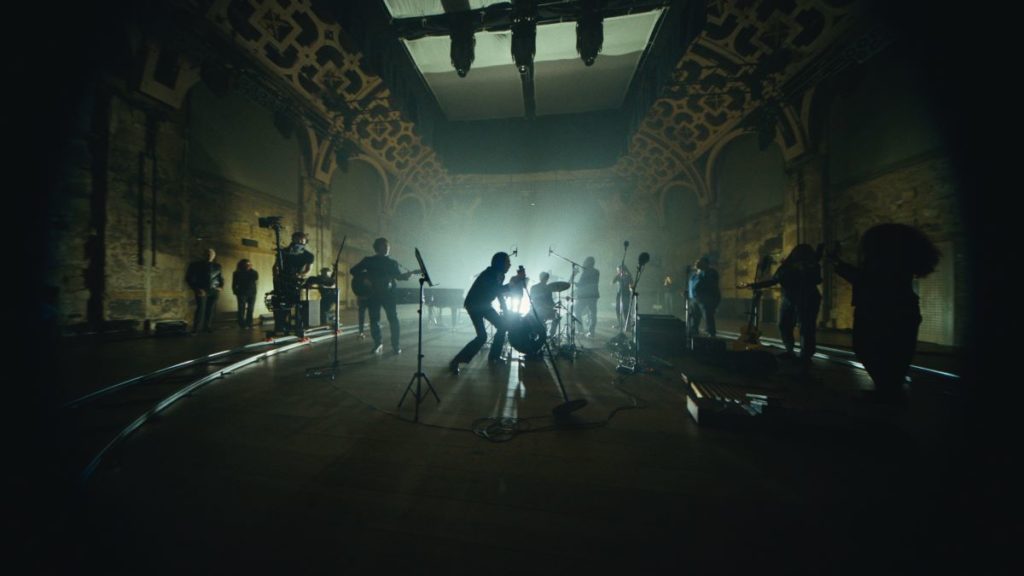 This Much is, for the most part, a performance film, but there are brief interludes in which Dominik interviews his subjects. Cave reads questions submitted by readers to his blog The Red Hand Files, using them as a springboard to reflect on his own life and career. Cave and Ellis (interviewed separately) muse on their near-crazed creative relationship, which sounds as fraught as it is fruitful (“It’s almost pointless to write a song and bring it into the studio,” Cave observes, “You almost have to hold Warren’s face and say, ‘These are the chords!’”). Curiously, given the constraints of the film, the subject of the pandemic is directly broached only once, and it’s brought up by neither Cave nor Ellis. Rather, it becomes impossible to ignore by the presence of the great Marianne Faithfull, who pops in for a quick spoken incantation. Faithfull, you might recall, was very nearly a casualty of COVID-19, having caught the virus in the spring of 2020 in conjunction with a case of pneumonia. She survived– Faithfull is one of rock’s great survivors– but is here aided by a cane and an oxygen tank. When her cue approaches, a PA removes her tube, and an assistant rushes in to apply makeup to the space under her nose. When she speaks, Faithfull proves that she’s lost none of her authority or effortless spooky-cool, but it’s a quiet, sobering reminder that things aren’t the same as they used to be.

The same, of course, could be said of the very existence of this film, but despite the occasionally ponderous nature of the music, the film’s strength is in the palpable joy of performance. Dominik clearly has a deep love and understanding of Cave’s music (it is his second documentary about the musician, following 2016’s One More Time with Feeling, and Cave and Ellis scored the director’s The Assassination of Jesse James by the Coward Robert Ford), and ably translates the experience of a Nick Cave concert even when no concert was actually thrown. As I write this, live performance has well and truly returned, but, as we have all learned in recent years, nothing in the future is certain. Though this won’t be news to the Hassle’s readership, the drive to create and perform music will never cease, and This Much I Know to Be True is a testament to the form’s undying tenacity. And even in the hardest of times, hey, there’s always ceramics.

Special one-night-only screening Wednesday, 5/11, 8:00pm @ Brattle Theatre (as well as the Kendall Square Cinema, AMC Boston Common, and other theaters across the country)