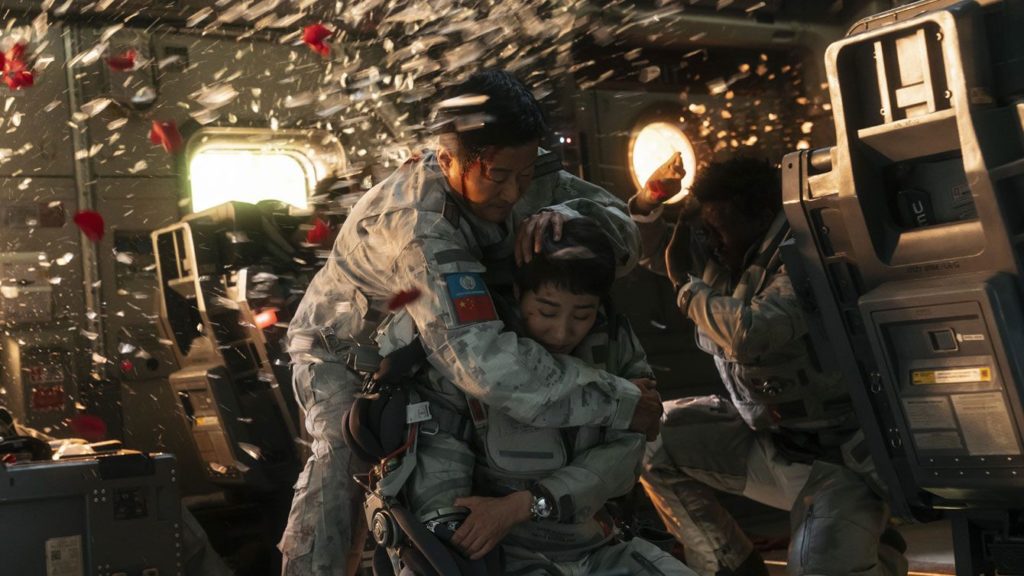 The world was a very different place when The Wandering Earth came out in 2019, and The Wandering Earth 2 meets our changed world with a completely reimagined sequel, or rather prequel. Based on Liu Cixin’s short story of the same name, the first was a high-octane space disaster film, much like Geostorm (2017) or Moonfall (2022); the second is an episodic series of futuristic project management nightmares, resembling less of a Roland Emmerich picture and more of a dialogue-heavy PRC mix of Shin Godzilla (2016) and Don’t Look Up (2021). And as you gather from that description, the differences are basically upgrades.

A terrorist attack on the space elevator, a plot to nuke the moon, and a global internet outage are just three in a series of problems faced by the Chinese-led United Earth Government (UEG) in their efforts to avoid planetary destruction as the sun will soon become a red-giant that will engulf the Earth. (In the end, as we know from the first film, the Moving Mountain Project successfully builds the 12,000 planetary engines necessary to renovate our home into a “wandering Earth” and initiate a new post-Anthropocene geological age.) Littered to the brim with striking compositions and beautiful CGI, there are noticeably fewer lengthy and outstanding action sequences than the first, though it’s still a much better film. Gwo and company spend more time with the dramatic speeches of governmental agents and trying to juggle a half dozen major themes, including but not limited to the hellscape of a completely digital life, the problems created by globalization (especially as it pertains to the internet), and good-ole unity. The film’s first action scene, the terrorist subplot, is by far the most interesting. A minority of the world’s population (but the vast majority of Americans) disagree with the UEG’s handling of the catastrophe and would rather re-locate the future of life onto AI computer servers, though it’s never said what exactly they will do with the servers as the red giant materializes. An ethno-European looking group of protesting radicals attacks the space tower, one of the early benchmark infrastructures in the project, with an inordinate number of drones as Liu Peiqiang (Wu Jing) and the other rookie astronauts kick some Russian and English speaking terrorist asses from one of the elevator shafts. In retrospect, it’s an odd way to structure a blockbuster film by leading with “the action scene” first, though it’s a choice that matches the decisions of the world saving heroes, who ultimately decide—as viewers of The Wandering Earth already know—that real life is better than a digital one. Seen through this filter, the film’s dogmatic rejection of going bigger and shinier than its precursor in favor of character development and old-fashioned project management is a directorial decision that crucially meets its own ethical demands of putting humans first: style and plot work together.

Speaking of structure, the inter-titles are a bit goofy in their wordage. “Six hours to the terrorist attack,” one reads, though we had no way of knowing about the impending attack. I kind of wonder if it’s a translation issue, but it’s hard to parse how that might work. If viewed more like episode titles, I suppose it helps stitch things together—or at least gives the episodes a feeling of being stitched together.

The Wandering Earth 2 may not be a good movie. It may not even be a movie worth watching on its own. But when the definitive history of the blockbuster is eventually written, Frant Gwo’s 2023 sequel to China’s fifth highest-grossing film of all time could very well end up functioning as the key chapter case study in the shifting of the world’s great verisimilar visual effects from West to East, from the United States to the People’s Republic. Compared to the early 2020s pixel-fucked and ugly grey American blockbusters, China appears to be demonstrating an alternative with their biggest CGI tentpoles: take notice, Hollywood.