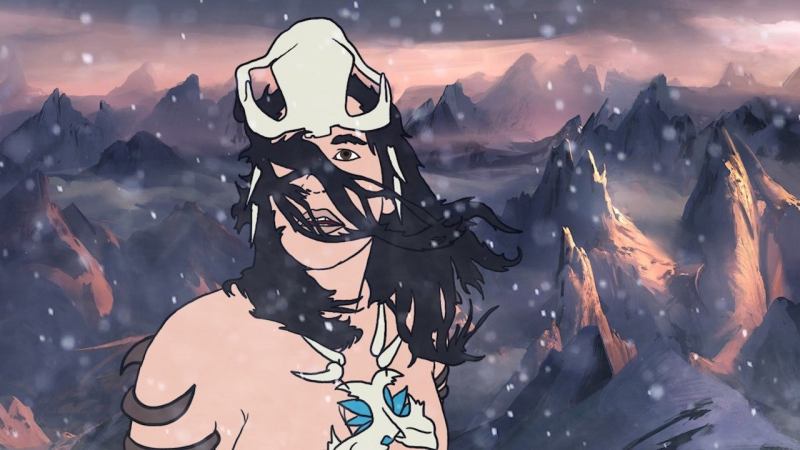 Adult animation is so often utilized in comedy that there’s a specific sort of respite when it’s fashioned in serious tones. The operative word here is adult, in which certain scenes and words may go beyond the PG-pale. The Spine of Night , a seven-year project from Philip Gelatt and Morgan Galen King, nests in rotoscope, a form that fascinates me because it never fails to disarm my senses every time. It’s how art can embellish the physical limits of the real world, but characters are in the same fluid-motion time zone as us. The Bojacks of animation are great, but a blue-moon phenomenon like Undone can be staggering and stunning.

In watching this, many will recall Ralph Bakshi’s 1983 Fire and Ice*, a nod to Conan the Barbarian in its primitive, morbid measures. Though co-director King admits Bakshi’s film as an inspiration, the homage might seem to extend to similar plot momentum and aesthetic, if at all. As Liu Jian’s multi-character-arc Have a Nice Day vibrates in the same octave as Pulp Fiction, The Spine of Night shares the almighty-power hot potato trope as The One Ring. As misplaced as it may look among today’s hyper-realistic trends of cinematic animation, The Spine of Night is the warm, twilight-special niche for the weirdos looking for a break from realism.

The story starts with Tzod (Lucy Lawless), a witch who is introduced in a “You’re probably wondering how I got here” way when she divulges details of her journey to The Guardian (Richard E. Grant) at the peak of a snowy mountain. She was first ambushed at Bastal, her home swamp, by Lord Pyrantin (Patton Oswalt)’s men and was brought back to his castle. In her quick spit-in-your-face moment, Tzod burns the Lord’s face using the wreath of blue flowers that she wears around her neck. Though the visiting scholar Ghal-Sur (Jordan Douglas Smith) protects her from immediate wrath, Lord Pyrantin then retaliates by burning down her swamp. She angrily kills the Lord, but is taken by surprise when Ghal-Sur attacks her and takes her wreath. Through his greed for power and glory, waves of generations are affected. The film reshapes the conflict between different groups — librarians and the hungry, village citizens and the swamp natives — using the blue wreath as the weight to rebalance this stretched-out battle.

The Spine of Night has a flat grotesqueness that works in its favor, making all perversions and gore feel more factual than shocking. This may be beneficial in redirecting disgust to the abuse of power. Watching the violence play back-to-back (and then arm-to-leg-to-sternum-to-wings) is akin to reading Wikipedia articles about medieval torture methods where you might murmur, “Man, that’s fucked up,” and then click on a related link. Subjectively, if you feel nauseated by seeing a person’s head slashed into thirds or someone’s upper torso charred to the bones because they happened to fall into a bonfire, then that’s also acceptable. We can take comfort that the rotoscoping method stopped at most scenes (probably).

Technique-wise, one interesting tidbit was that the film was originally created using a cast of different voices (except for Betty Gabriel, who read for librarian Phae-Agura from the beginning). This might not be as distracting as the sometimes archaic declarations of mortality, eternity, and other topics in the medieval word cloud, but past its shortcomings, The Spine of Night gels a story that works for the audience seeking for a hallucinatory adventure (mind-altering recommendations are complimentary from Lawless).

*In watching this movie, I found that it was actually rated PG. Even if it was lawful, I would have refused watching this with a person that would have been considered my parent or guardian.

Now playing at the Brattle Theatre from November 5 to November 11!