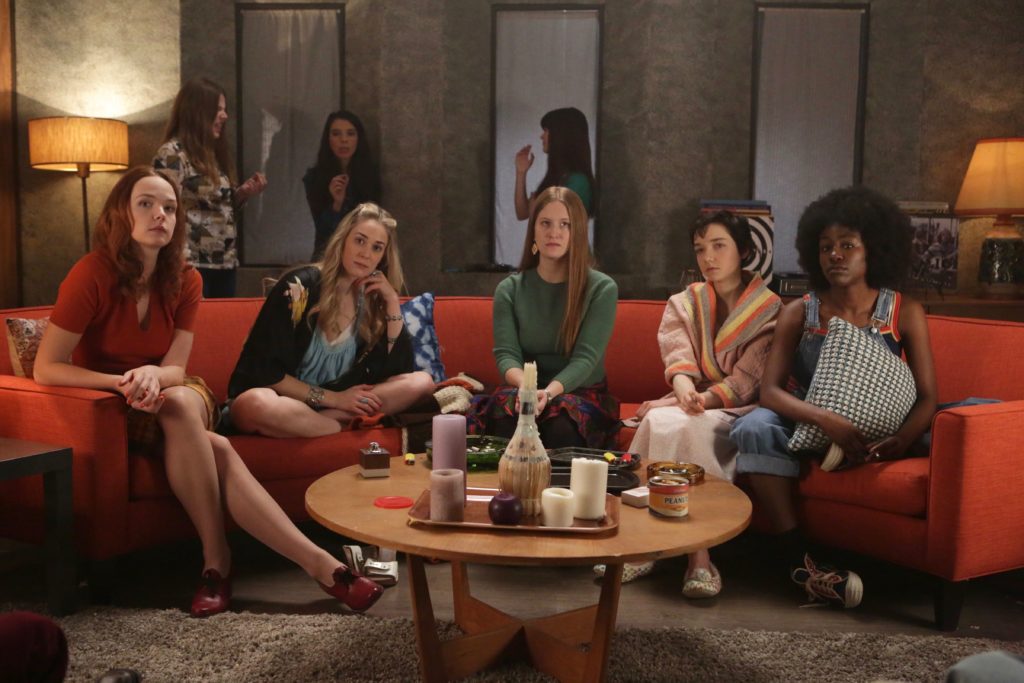 “Green” has not yet been given the green light universally, but as consuming marijuana becomes socially and legally accepted, it becomes easier to forget the days of Reefer Madness and rampant paranoia about the effects of cannabis (and not just because we’re smoking more). In The Marijuana Conspiracy, Craig Pryce transports us back to a time when society’s relationship with ganja was more tenuous, embraced by the young but spurned by the old.

Pryce’s film is based on the true story of a research study conducted by the Ontario Addiction Research Foundation in 1972. Dr. Fincher—a sociologist who goes by Barry, and who abstains from alcohol and meat, but indulges in the occasional joint—receives funding to investigate the effects of marijuana on the female body. Barry and John Bradow, the bloated bureaucrat who represents the Foundation’s anti-marijuana interests, are immediately at odds: Barry is a behaviorist who “lets the data speak for itself,” and Bradow wants the data to tell a scary story.

Over the course of the first half hour, we’re introduced rotating-door-style to the researchers and participants. Though their motivations vary (e.g. getting out west to a co-op, paying off travel debts, saving for university), all of the female subjects are there because they need money. Each is pursuing her own vision of autonomy, but they can’t achieve independence without a little bit of green.

As we’re introduced to the women, we’re introduced to the casual misogyny of the ’70s: the ease with which women are referred to as “broads,” the offhand equivalency between menopause and insanity. Women are the subjects for this study because their bodies are subject to control. Early on, it is evident that these women are inhabiting a man’s world, and will be made to follow men’s rules.

The majority of the film is set within the confines of the research institute. For 98 days, the women are not allowed to leave or have contact with the outside world. Every night, the ladies will smoke two joints; every day, they’ll make macramé and exchange it for cash. They are responsible for their own meals and supplies, and can pocket what they don’t spend.

It’s clear we’re not meant to be on the side of stodgy Bradow. He, and anyone who buys into the cannabis panic, is met with a smirk; he’s the butt of the joke. Beyond implicitly endorsing its titular substance, The Marijuana Conspiracy embraces the conventions of a stoner film. It tends toward corniness; the adoption of ’70s colloquialisms (“right on,” “pret-ty mel-low yel-low maaan,” etc.) feels a little heavy-handed, a bit goofy; and the plot is spelled out in the dialogue (early on, Barry discusses the project with his assistant, who says, “It sounds like wants you to skew the results.”). In short, it’s a movie made for viewers who are likely to be toking along.

That isn’t to say that Pryce has set out to make a stereotypical 4/20-friendly flick. As the film progresses, the focus shifts to the women’s experiences of confinement and exploitation. Barry may be unwilling to skew the results, but when Bradow exerts some pressure, he becomes willing to alter the course of the study. He ups the THC concentration in the women’s nightly joints. He claims the women are aware of this.

Much like a bad high, the film takes on an unsettled and paranoid affect from this point on. Despite keeping up with their macramé, the women are unraveling. They want to go for a walk outside, talk to a loved one—above all, though, they demand to know what’s happening to their bodies. They receive no leniency and no answers. When they band together and threaten to quit, Barry offers a $250 bonus to anyone who sticks it out. “It’d be a shame to not be able to cash out,” he warns.

By engaging with the messy, exploitative history that leads to the decriminalization and legalization of weed, The Marijuana Conspiracy rises above the stereotypical stoner film. Unsurprisingly, the women who participated in the study suffered no long-term detrimental effects from the marijuana. They did, however, struggle after emerging from intense isolation. Pryce presents us with a story that’s less about the harmlessness and/or fun of cannabis than it is about women who were taken advantage of. The women’s questions were never answered: to this day, none of them know what the data speaks of. The struggle for a more *peace*ful world continues.

The Marijuana Conspiracywill be available digitally and on demand just in time, this Tuesday, April 20th.